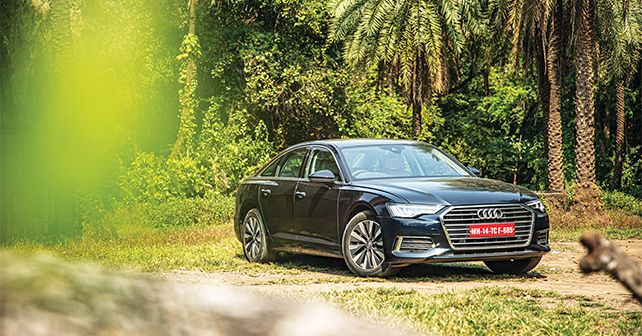 The new A6 has been on sale in the West for the past year-and-a-half, so was it worth waiting for?

Eight years! That’s how long the previous generation of the Audi A6 was on sale. Of course, in between it saw a midlife facelift and multiple special editions, but there’s no denying that in the last few years it was beginning to show its age – a point highlighted by the launch of the new BMW 5 Series and Mercedes-Benz E-Class in 2017. But now Audi has finally caught up by launching the all-new A6, so was it worth the wait?

Clean cut
One look at the new A6 is enough for you to notice that Audi has taken a more evolutionary, instead of a revolutionary, approach towards designing it. That being said, the typically clean German design certainly does look elegant. The A6 now gets a larger grille, which, unlike in the new BMW’s, seamlessly fits into its overall design. From the front bumper and bonnet to the rear bumper and tail section, the sharp creases are a lot more prominent.

The A6’s alloy wheel design echoes that of the all-electric e-tron, and I simply love it. The head and taillights both are LED units, and have also become sharper than before. Overall, the A6 isn’t quite as striking as perhaps Audi was going for, but it’s certainly quite pleasing to look at.

And while Audi may not have radically changed the overall exterior design of the new A6, it has certainly done a lot to give the interior a new complexion. The multiple layers of the dash, and the use of different materials, make it looks distinctive and fresh. I just love the gloss black panel above the glovebox and the way it blends into the large central touchscreen unit.
The new A6 gets another screen on the centre console for the automatic climate control, and, to be honest, I’m not a huge fan of this new trend of replacing physical knobs with touchscreens. Sure, it makes the dash look uncluttered, but it requires you to take your eyes away from the road while driving to operate any of the controls. 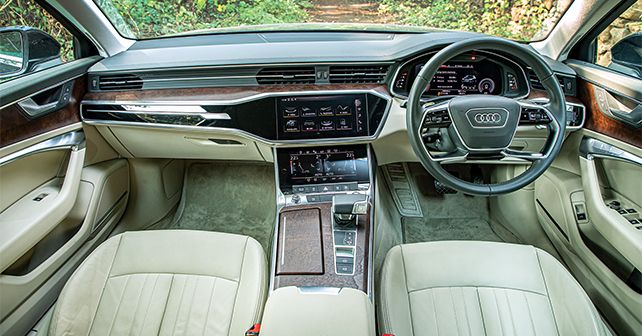 There’s also a third screen behind the steering wheel, known as Audi’s Virtual Cockpit. Now, this one is a lot more useful, as it offers you all the information you could possibly need right in front of your eyes.

The new A6 has grown marginally in size, something that you barely notice – you have to look at the spec sheet to be made aware of this fact. While the length has increased by 7mm, wheelbase is up by 12mm, but unlike the E-Class, the A6 launched here in India isn’t the long-wheelbase version.

Smooth as ever
Audi has only brought in the A6 with the 45 TFSI badge to start with. This 2.0-litre petrol motor develops 241bhp and 370Nm. The power here is marginally less than the 5 Series’ but more than that of the E-Class and Jaguar XF. The torque rating, however, is better than all its rivals.

The engine feels incredibly refined and quiet. Whether driving in the city or cruising on the highway, the noise inside the cabin is always extremely well contained. It’s only when you push the car to its limit that a mild purr is heard. In terms of outright acceleration, the A6 surely doesn’t feel the quickest out there, but it isn’t slow by any means. In fact, the power delivery is more progressive than eager. Some of this can be attributed to the 7-speed S-Tronic transmission, which is smooth but isn’t the quickest to respond to inputs. 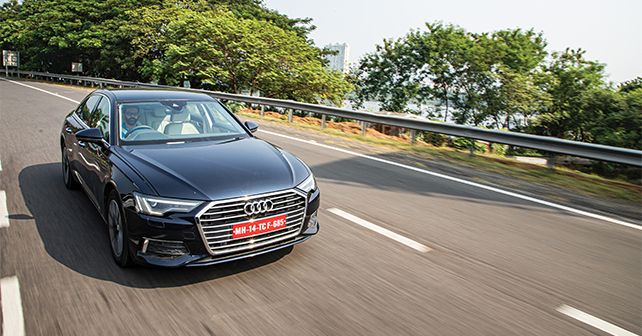 Like all other Audis, the A6 also gets different driving modes. But since this model misses out on air-suspension, the modes only alter the engine and steering feel. While there is a noticeable difference in the way the steering weighs up, depending on the selected mode, sadly the engine doesn’t feel all that different.

Unlike the previous model, which was fitted with air suspension as standard, this new A6 sits on steel springs – a move that has been made to keep the costs in check. But to give credit where credit’s due, despite the downgrade in terms of hardware, the A6 ride flattens out the worst roads incredibly well. Of course, the 225/55 section tyres play a huge role in cushioning most of the bumps. The A6 is even high enough to ensure that you don’t have to cringe every time you go over a large pothole.

On twisty roads, however, the Audi leaves you wanting more. For an engine that packs a decent punch, it feels out of its comfort zone when pushed hard. The steering is light and quick, which is great for urban driving conditions, but around corners it just doesn’t feel communicative enough. 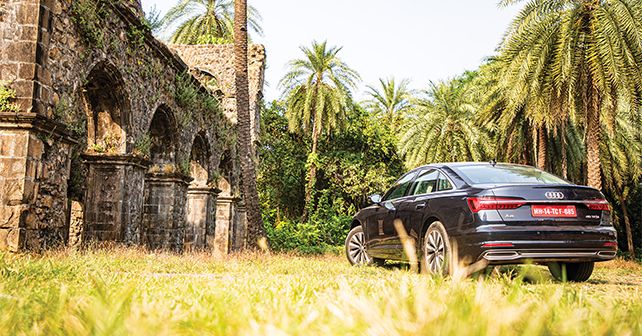 Verdict
Although Audi has brought the A6 to India more than a year-and-a-half after its global unveil, the A6 remains impressive in terms of style, refinement and tech. It may be a bit late to join the party, but it has more than enough tricks up its sleeve to give its competitors something to think about. That said, what the Audi gains in all of these aspects is somewhat lost in the overall driving experience. Sure, it doesn’t set a foot wrong, but it’s very clinical in the way it operates. So, if you’re looking at something more emotive or involving, look elsewhere. But if you want something clean and cutting edge, this latest model from Ingolstadt has got you covered.

X-factor: Refined, loaded, and stylish, the new A6 ticks all the right boxes.