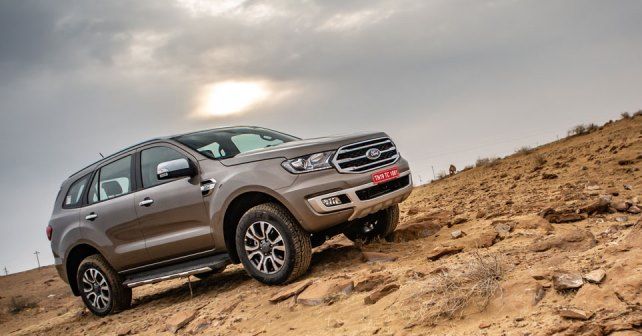 It was the Endeavour that started the SUV boom for Ford in India. Now in its third-generation, and facelifted, will it be able to regain its once segment-leading position? We take it into the sand dunes of Rajasthan to find out.

It’s true that Ford began its SUV journey in India in earnest with the EcoSport, but it was actually the Endeavour that set Ford rolling in India in the SUV segment. The first two generations of the Endeavour were quite successful, in fact, so-much-so that the first-generation Endeavour was what created the large SUV segment in the Indian market. However, over the years – for a multitude of reasons – sales of the Endeavour haven’t been up to Ford’s expectations. With the new facelifted version of the Endeavour, Ford India is looking to reposition itself and regain its footprint in a segment that’s undisputedly dominated by the Toyota Fortuner.

Minimal reorganisation
First things first, the latest version of the Endeavour has undergone minimal changes, focusing primarily on styling tweaks, equipment count and rationalisation on the number of trim versions offered. The inherent abilities of the Endeavour – both on and off the road – remains unchanged. And this is what Ford India wanted to prove when they offered to take us into the sand dunes of Sam, outside Jaisalmer, for a true-blue dune-bashing experience. 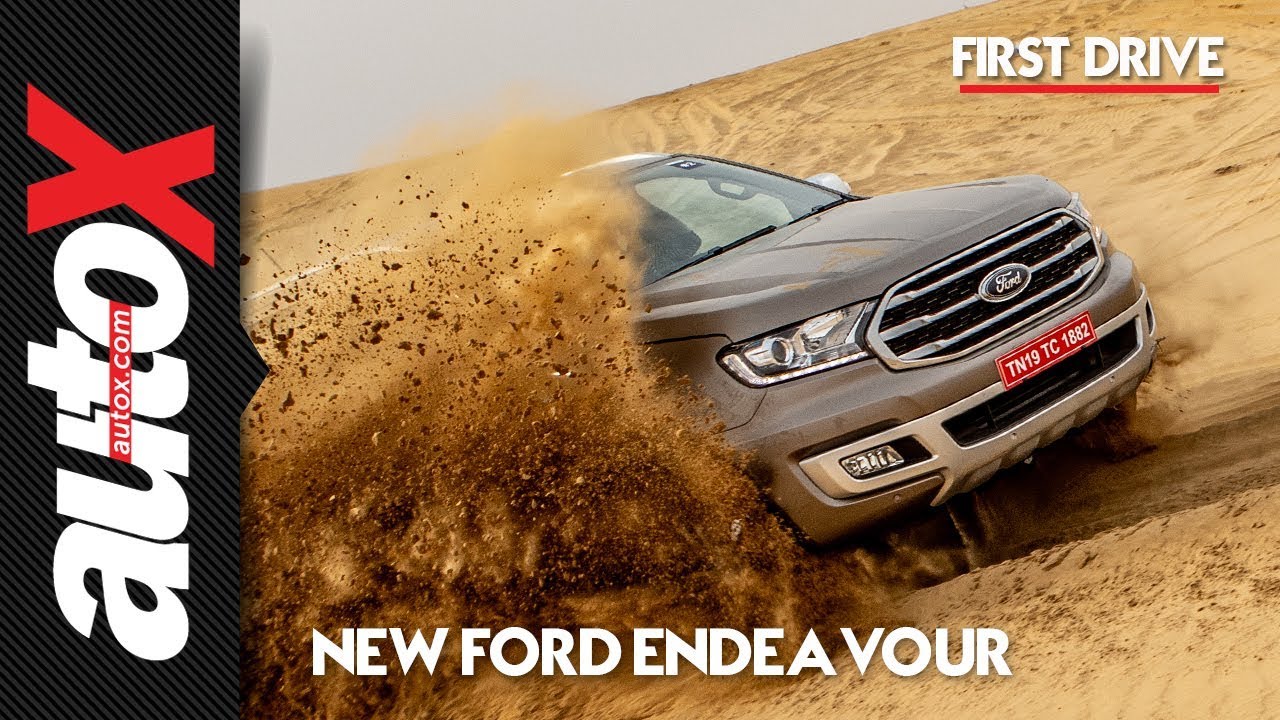 Now, before we get into the dune bashing, let’s talk a bit about the car first. What’s interesting is that the spec sheet of the new Endeavour is essentially the same as the outgoing car. It’s offered with two engine options – a 3.2-litre and a 2.2-litre diesel – and two transmission options, a six-speed automatic and a manual for the 2.2, which only comes with two-wheel drive, and an automatic with four-wheel drive for the 3.2.

Some of the design changes include a new large trapezoidal chrome grille – a design trademark for Ford vehicles worldwide – with three horizontal slats, front and rear skid plates and a new design for the 18-inch alloy wheels, which I think looks quite good. Overall, the Endeavour, with its butch stance, has massive street presence. I don’t think I’ve ever heard anything negative about its styling, which can only be a good thing. 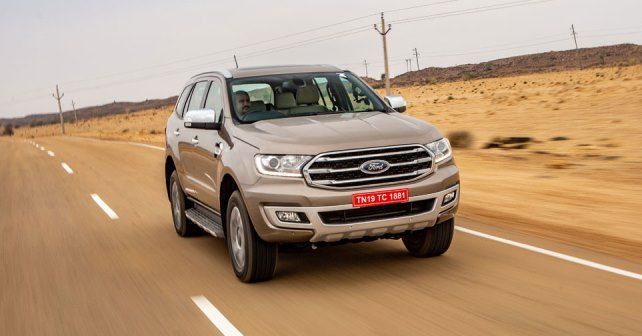 The equipment count has also increased, with six airbags as standard on the car – the Titanium+ versions gets seven airbags – along with a host of other features, such as handsfree tailgate operation. The Endeavour also features an active noise cancellation system, which is quite interesting. It uses a combination of mics, speakers and a processor to play countering noise inside the cabin, which reduces the engine noise filtering into the car. And while driving it, you can actually feel the effect of the system – as the cabin feels quite well isolated. And unless you’re flooring the throttle completely, the engine noise remains impressively muted.

The cabin, on the whole, is a nice place to spend time in. There’s plenty of room and the seats are quite comfortable. However, its high ride height means that getting in and out of the car may require some effort. The quality levels seem quite good, and, overall, it has a pretty well-designed interior that feels premium and functional at the same time.

The standard-fit 8-inch touchscreen SYNC 3 multimedia system also comes in for praise – I was quite impressed with the interface of the system. Unlike many other systems with small icons, the Ford system features large block-like controls on the touchscreen, making them very easy to operate while driving.

Powering through
Out on the smooth, flowing roads of Jaisalmer, as we headed towards the Sam Sand Dunes, the Endeavour made a fantastic first impression. Remember, it’s a vehicle based on a ladder frame chassis, which means that you expect the usual issues, like a jiggly ride, vague steering and a feeling of heft, given the heavy kerb weight. But not in the Endeavour, for it masks all this brilliantly.

The Endeavour has fantastic ride quality and excellent high-speed ability. In fact, I don’t think I’ve driven a more composed and comfortable ladder frame vehicle before. I don’t possess enough technical knowledge to know exactly how the Ford engineers have achieved this feat, but I possess enough knowledge about cars to know that this a hell of a feat. 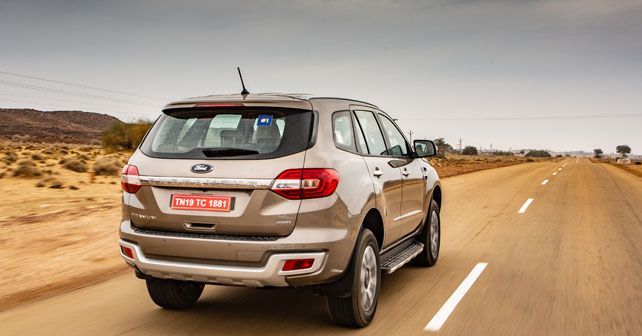 The Endeavour is a large SUV that truly feels like a driver’s car, just as a Ford should. A special word here for its steering feel – despite its heft and size, the steering responds immediately, gives you great feedback and is great fun to handle. The only thing that makes its presence felt every now and then is the high centre of gravity and kerb weight of the Endeavour, but, then again, there’s only so much you can do against the laws of physics.

Bashing the dunes, though, was a completely different experience and gave me a clearer idea of the vast abilities of the Endeavour. In the 3.2-litre trim, the Endeavour has an intelligent four-wheel drive system, along with an electronic rear differential lock and 4x4 low mode. Now, it comes with four driving modes, of which we naturally chose Sand mode. Pair all this hardware with a quick shifting, six-speed gearbox, and the Endeavour has all the boxes ticked for some serious dune bashing. But the real party trick is the 197bhp and 470Nm of torque from its 3.2-litre engine. Pair this with the excellent off-road hardware, and you’ll get an idea of the way it powered through everything that the dunes could throw at us. In fact, on the really difficult parts of the dunes, the ample power and torque really pulled the car through.

Having bashed some dunes and flattened the throttle along the wide, flowing and empty roads of Jaisalmer, I can safely say that the Endeavour is by far the best driver’s car in its segment. The combination of a powerful engine, quick shifting gearbox and a fantastically sorted ride, handling and steering package makes it a hoot to drive. And, at the same time, it remains comfortable for other occupants too, while retaining the practicality that a vehicle of its size offers. 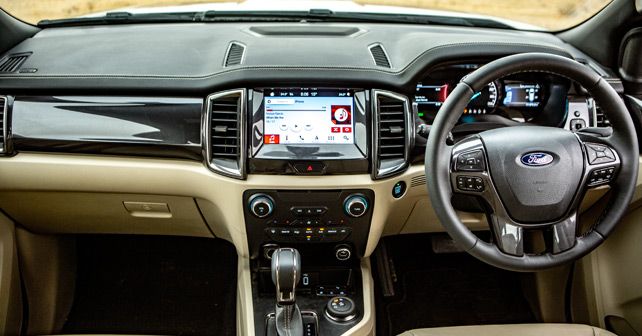 My only gripe is that I would have preferred paddle shifters, for even though the gearbox works very well, sometimes I did feel the need for some manual control.

Hard to resist
Having tested its abilities in a variety of conditions, I will make a statement that I don’t often make – the Endeavour is hands down the best vehicle in its segment in every aspect. Be it driving appeal, ride quality or off-road ability, the Endeavour is simply terrific. The only issue that the Endeavour truly faces in our market is that the Ford brand name is simply not as well regarded as Toyota, which makes the Fortuner the default choice for most customers.

However, with Ford working overtime over the past few years on solving this issue, they claim that the Endeavour has the lowest maintenance cost in its segment (68 paise per kilometre for the 2.2 and 72 paise for the 3.2 over 100,000 kilometres). Now, this is something that might tip the scale in favour of the Endeavour. In fact, with its now reduced pricing, I’d say that if I were looking to buy a large SUV with my own money, I would buy the Endeavour with my eyes closed. How’s that for a recommendation! 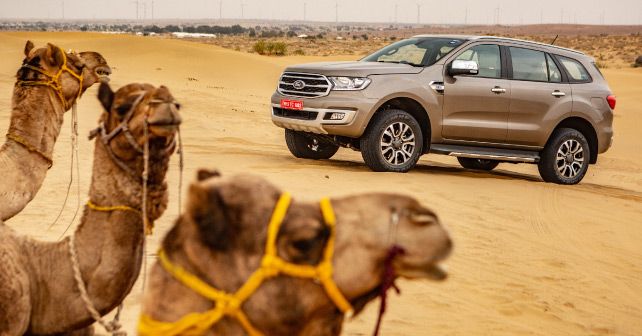 Having bashed some dunes and flattened the throttle along the wide, flowing and empty roads of Jaisalmer, I can safely say that the Endeavour is by far the best driver’s car in its segment. 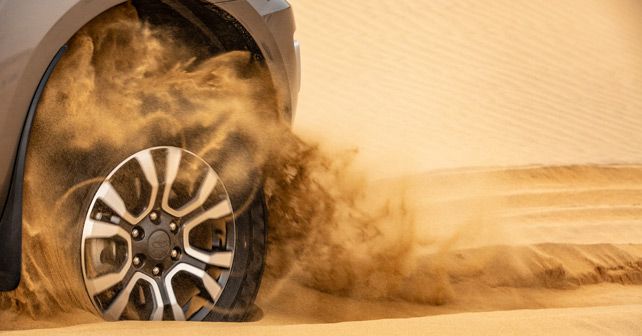 Some of the design changes include a new large trapezoidal chrome grille – a design trademark for Ford vehicles worldwide – with three horizontal slats, front and rear skid plates and a new design for the 18-inch alloy wheels.

The 3.2 Endeavour is offered only with a six-speed automatic transmission and four-wheel drive. Our only gripe is that it doesn’t come with steering-mounted shift paddles for manual control of the gearbox. 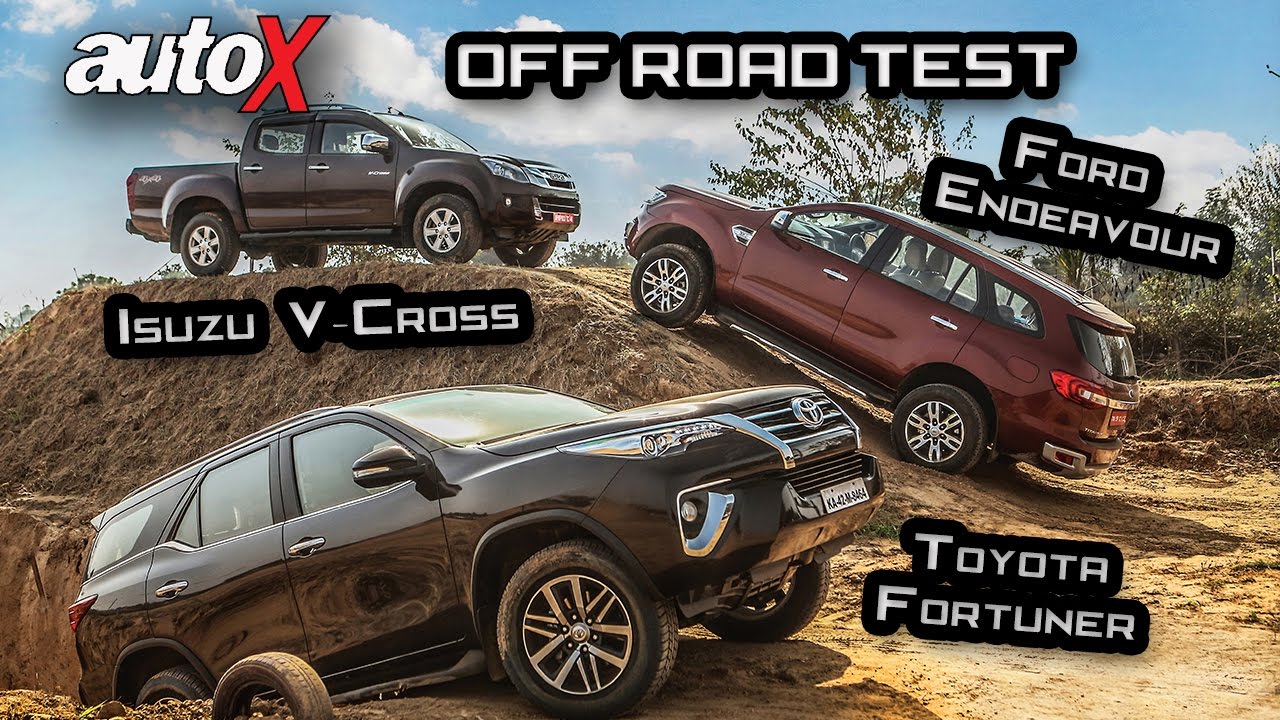 X-Factor: If you’re looking for a large SUV that’s fun to drive, comfortable and even capable of serious off-roading, there’s nothing that beats the Endeavour in its segment. 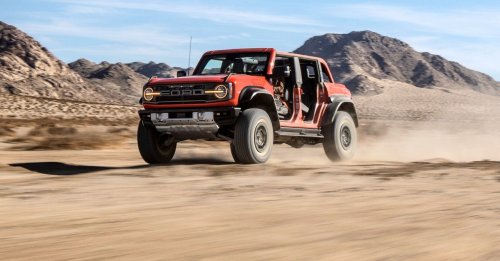 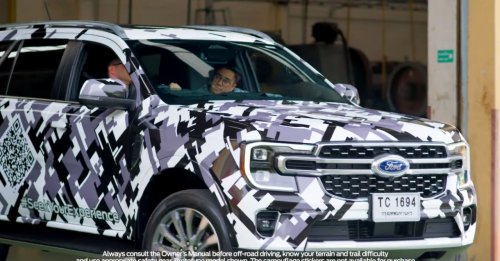