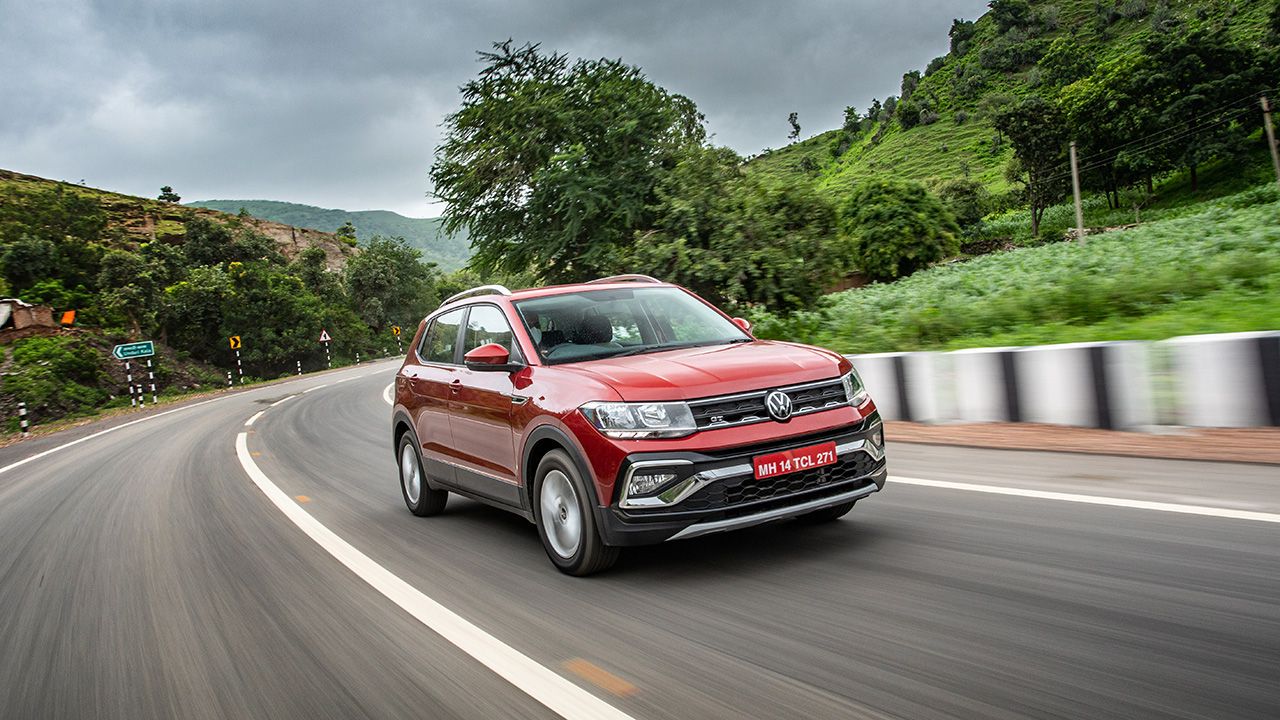 With a new lineup of products, Volkswagen is attempting to reinvigorate its presence in the Indian market, led by a lineup of SUVs. We drive the most important of them all – the Made-for-India Taigun – to see how it performs and whether it can crack the incredibly competitive mid-size SUV space.

It goes without saying that the Indian automotive market is a difficult beast to master, and, rather tellingly, even more difficult – for an automobile brand – is the process of trying to guess the ever-changing preferences of Indian customers and adapting their product lineup to cater to customer demand, to be successful in India. However, over the past few years or so, this job has been simplified to an extent with the runaway popularity of SUVs. SUVs of virtually every size, flavour and taste have become hot-selling items, and that has simplified the matter to an extent for automakers in India. 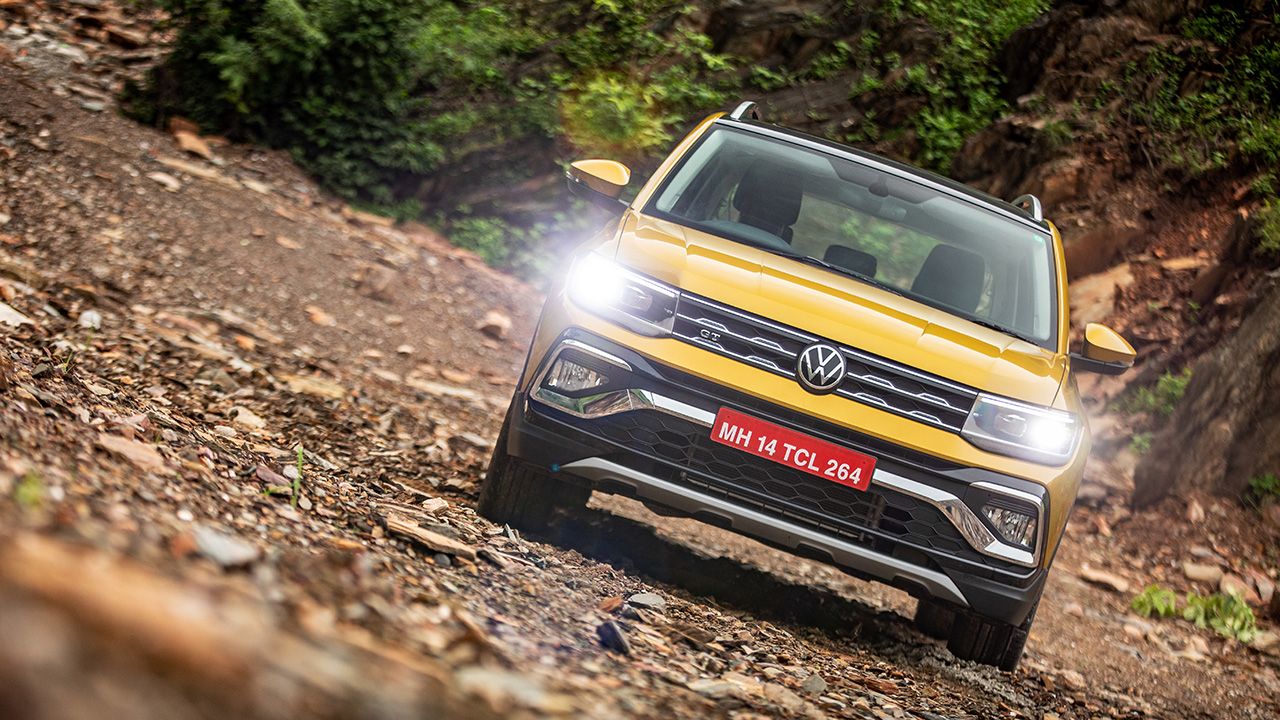 The VW Group witnessed this transition a while ago and made the wise decision of localizing and customizing their acclaimed MQB platform to not only suit manufacturing in India but also to suit the preferences of Indian customers. This, of course, has many benefits, by local manufacturing and increased localization of parts – up to 95% parts of the MQB platform will be manufactured in India – the cost of the platform and the products can be kept in check, and yet, scaling up for demand would be a much easier process too. Of course, VW has also made India-specific alterations to the MQB platform to suit the preferences of Indian customers better, but that’s something we’ll come to later. More importantly, it should be recognised that with massive investment into the ‘India 2.0’ program, the new range of vehicles and the platform underpinning them reaffirms VW’s commitment to India, and to making a success of their Indian operations. However, as they say, the proof of the pudding lies in eating it, or in our case, driving it, so let’s see how the Taigun fares on Indian roads.

One look at the Taigun and its amply clear that the design inspiration for the Taigun comes from its bigger siblings, like the Tiguan or even the Atlas SUVs. From the big front air dam to the large headlights, and the chrome-lined grille with the new monochrome VW logo, the design is pure, no-nonsense Volkswagen. Of course, there’s a sizeable amount of chrome on the front end of the car, but with its seamless integration in the grille and the fog lamp surrounds, it is well integrated and doesn’t seem to be in your face. 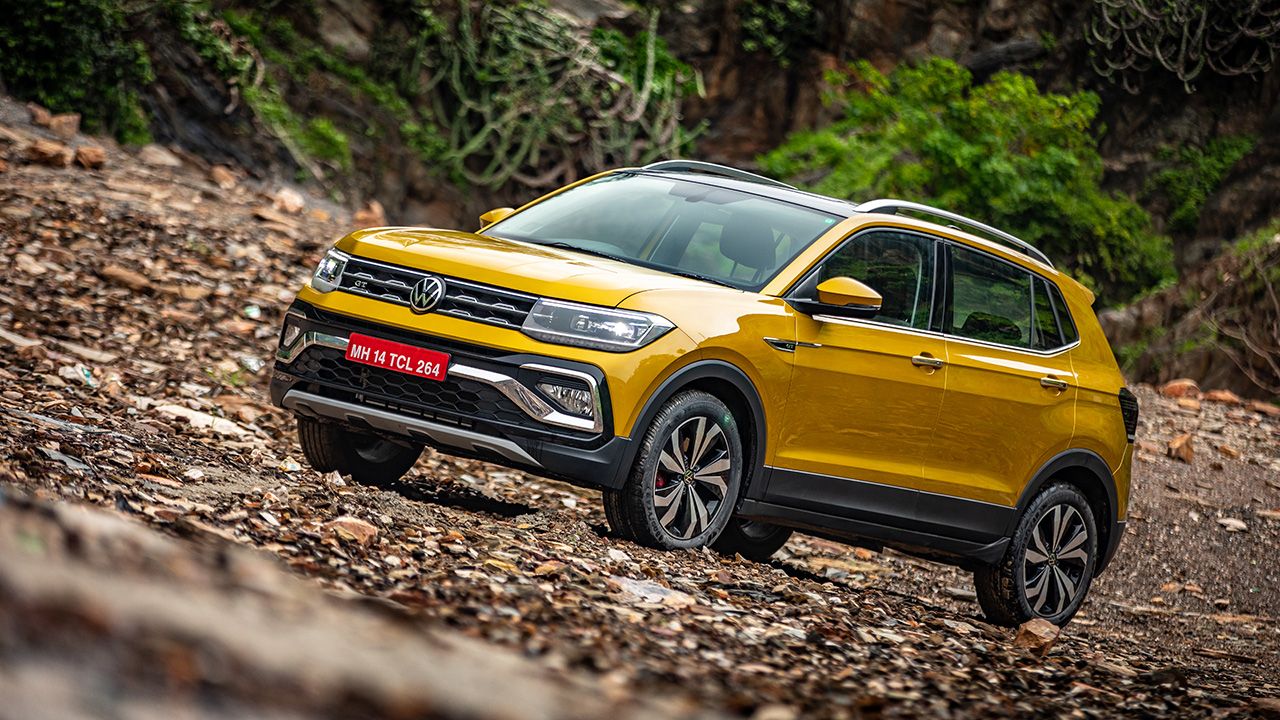 In profile, the dual-tone 17-inch wheels of our top-of-the-line GT TSI variant fill the arches quite well and give the Taigun a balanced stance, while the chrome door handles and functional roof rails – they can take a load of up to 80kgs and are not fitted only as a visual accessory – and the twin shoulder lines gives the Taigun a characterful look. Also helping here is the generous amount of body cladding, which does enhance the sturdy look of the SUV.

But, for me, the best angle of the Taigun must be the rear end. I’ve been an unashamed fan of full-width tail lamps – since I first saw them on an early-90’s Toyota Mark II sedan – and the Taigun with its full-width LED taillamp really aces the look. Not only does the width of the lamp give the Taigun a unique design touch, but the black plastic cladding also accentuates the taillight so much more. Overall, I would say that with its bold front and excellent rear-end designs, the Taigun looks very assertive on the road, and with its bright colour offerings will be easily recognizable. 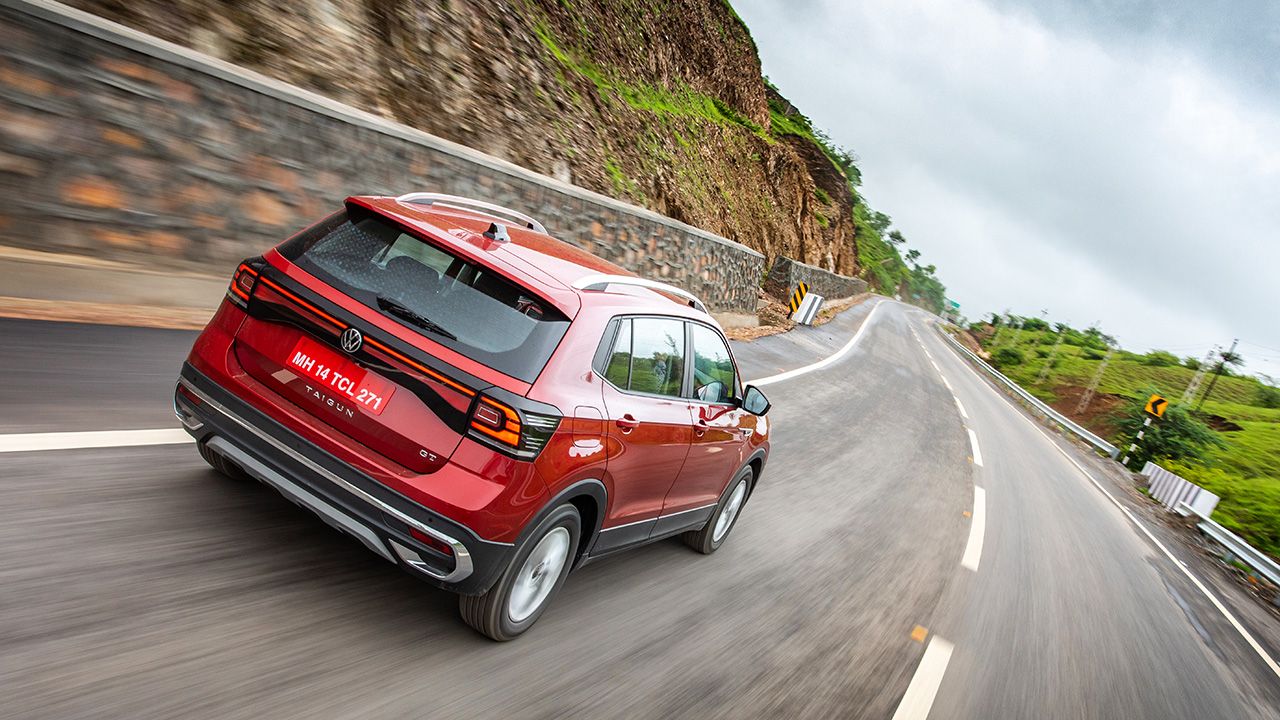 The interior of the Taigun is a very welcoming space, and if you’re familiar with the Skoda Kushaq, you’ll find the layout pretty much familiar. However, a few things change here. Of course, the seat upholstery and finish are different, but even the centrally mounted 10-inch multimedia console is integrated differently, with the Taigun’s screen integrating better into the dash. More importantly, depending on the body colour you choose, the interior also gets a splash of the body colour, which really brightens up the interior of the car. For instance, the manual version of the Taigun we tested featured interior highlights in wild cherry red, which really adds a splash of colour to the interior and brightens it up considerably. The Taigun also features a carbon insert that faces the passenger and adds another style element to the interior. 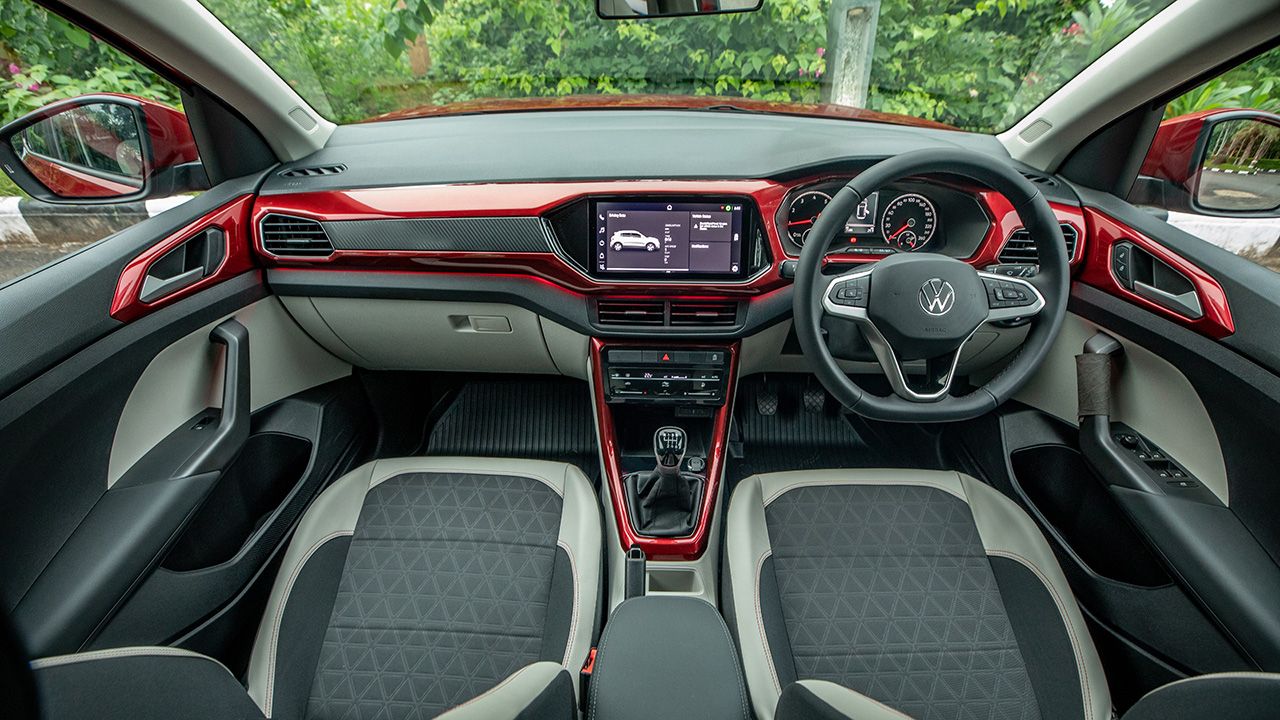 When it comes to equipment levels, the Taigun comes quite well equipped, with the exception of the Kushaq being the addition of an 8-inch digital instrument cluster that features various screen options that you can choose from. But, at the same time, it loses the option of ventilated seats. Overall, though, the Taigun’s interior feels a good place to be in. The quality is largely excellent – even though there are some hard plastics on the dash – and the two things I really liked were how supportive and comfortable the seats were, and the steering with its flat-bottom and perforated leather was excellent to use. Also, when it comes to space, with its reduced centre tunnel in the rear footwell – a specific change made to the MQB platform for the Indian market – means there’s room for the third passenger to place their feet. While excellent space management means that passengers up to six feet tall will be very comfortable in the Taigun’s rear seat, and there is ample boot space too. Sure, three full-size adults in the rear seat will be a squeeze due to the limited width of the platform, but four adults or a small family will be extremely comfortable inside the Taigun.

Of course, given VW Group’s no-diesel decision in India, the Taigun will be petrol powered only, so diesel fans don’t have a choice here. But the two engines powering the Taigun are very impressive, with options being the 1.0-litre and 1.5-litre TSI turbocharged units. The 1.0-litre versions of the Taigun will be available later, and at the drive, we were able to drive only the 1.5-litre engine in automatic and manual form. Producing 148bhp and 250Nm of torque, the engine is pretty much the same as the one in the Kushaq and as result shares all the qualities. This means that peak torque comes from just 1,600rpm, which means that no matter what gear you’re in, the Taigun pulls cleanly and the engine itself is very eager to rev. As a result, the performance of the Taigun is brisk, and 0-100 comes up in just 9.1 seconds, with a claimed top speed of 190km/h – figures that will satisfy most drivers. 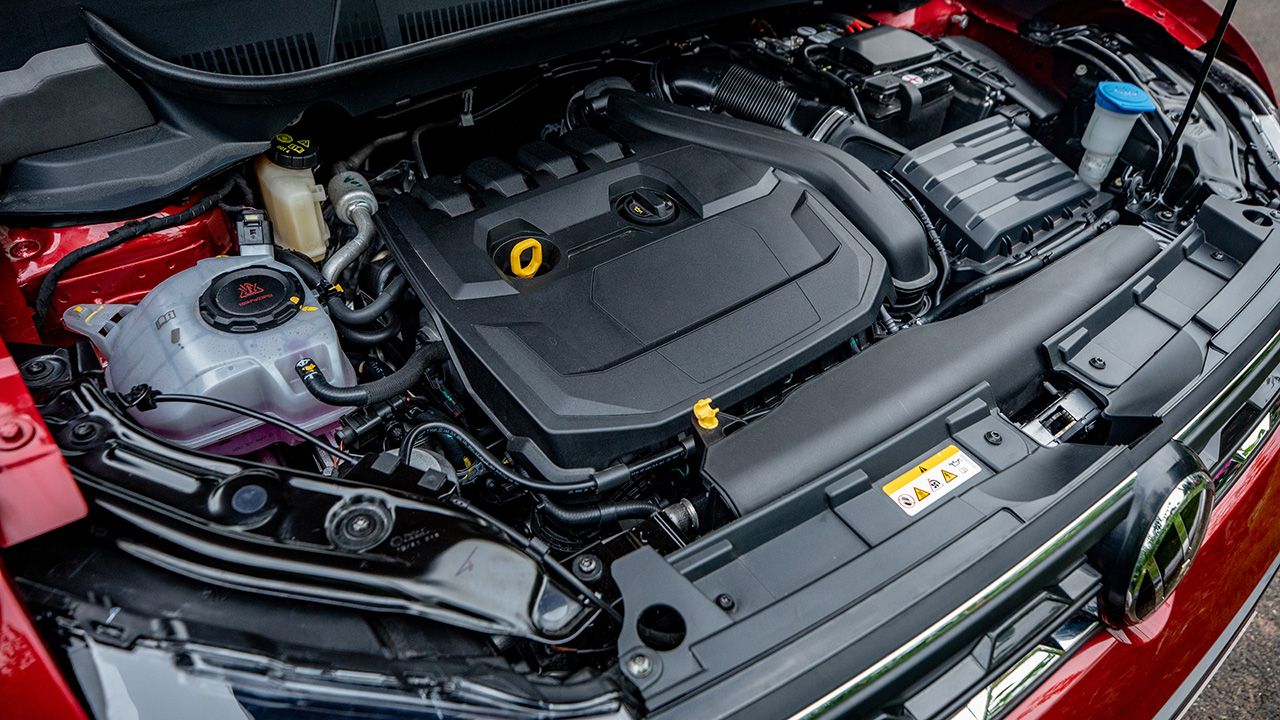 More importantly, the drivability of the Taigun – due to the well-spaced gear ratios and the meaty torque band spread over 1,600 – 3,500rpm – remains fantastic whether you’re stuck in stop-start traffic or are on a fast-moving highway. The gearboxes also remain a delight, the 7-speed dual-clutch automatic performs a good balance between quick shifts and smoothness, while the steering-mounted paddle shifters provide additional manual control when required. But the 6-speed manual gearbox is the highlight of the pair for me, with tight shifts, well-defined gates and a gearbox that’s simply delightful to use. Pair this with pedal placements that’s ideal for heel-and-toe shifting and the Taigun simply delivers a lot as far as driver delight is concerned.

Additional credit is also due to VW engineers for the suspension setup of the Taigun. With a chassis that’s 30% stiffer than the Polo’s, the engineers had a strong base to work with, and it shows in how well the Taigun rides. Whether it’s bad roads or fast highways, the Taigun’s suspension deals with all kinds of surfaces without a worry, and the high-speed stability is simply fantastic. Additionally, with a lower centre of gravity, the Taigun is a delight to throw into fast corners as the SUV sticks to the road like a leech and delivers a quality driving experience. However, there is one slight flaw here, which is the stiffness of the suspension, and on truly broken roads, some of the bumps go get transmitted into the cabin. But it’s a small price to pay for the driving appeal of the Taigun. 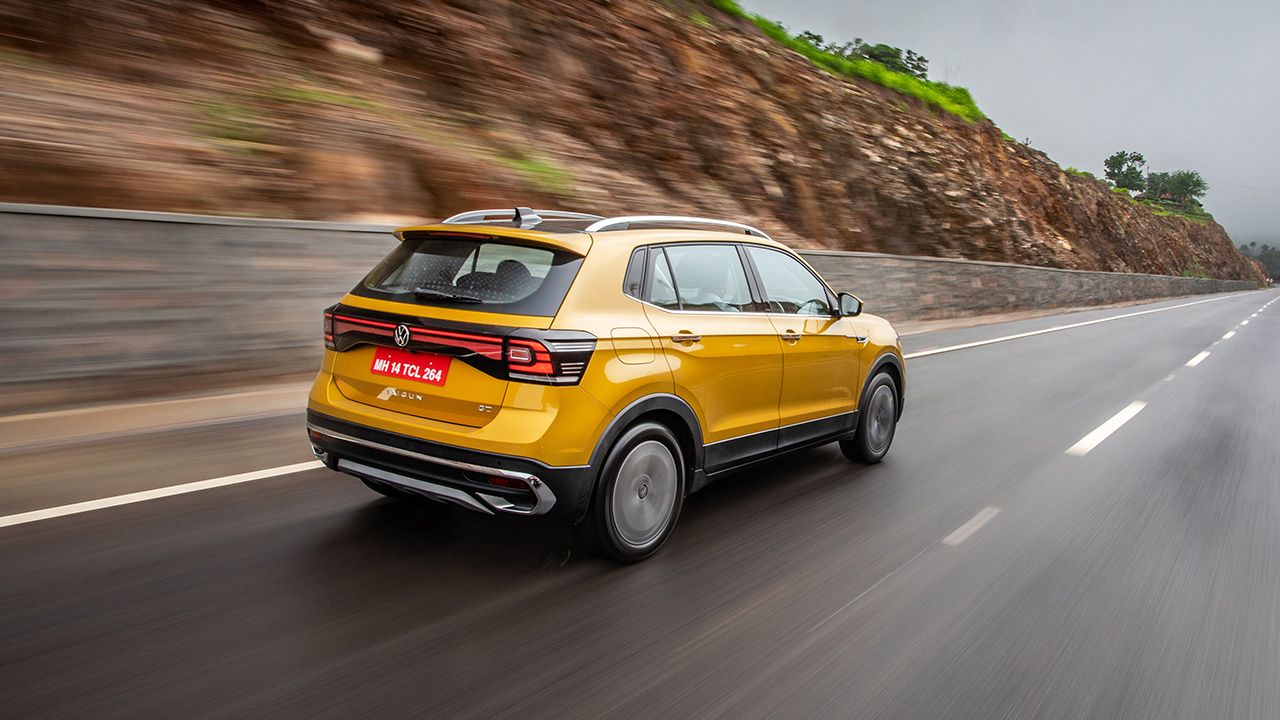 There are many things that I deeply admire and enjoy about the Taigun. Its design, driving appeal, peppy engine, terrific gearbox, and lovely seats are some of them. But it’s not perfect and given the current market circumstances, there are two major tricks the Taigun misses out on. One, the lack of a diesel version is going to turn away some of the buyer’s, but VW group boffins reckon this will change by late next year when the second phase of BS 6 regulations will make diesel engines supremely unattractive to most buyers. Two, the lack of a panoramic sunroof – the Taigun offers a regular-sized sunroof – is also going to displease some potential customers. 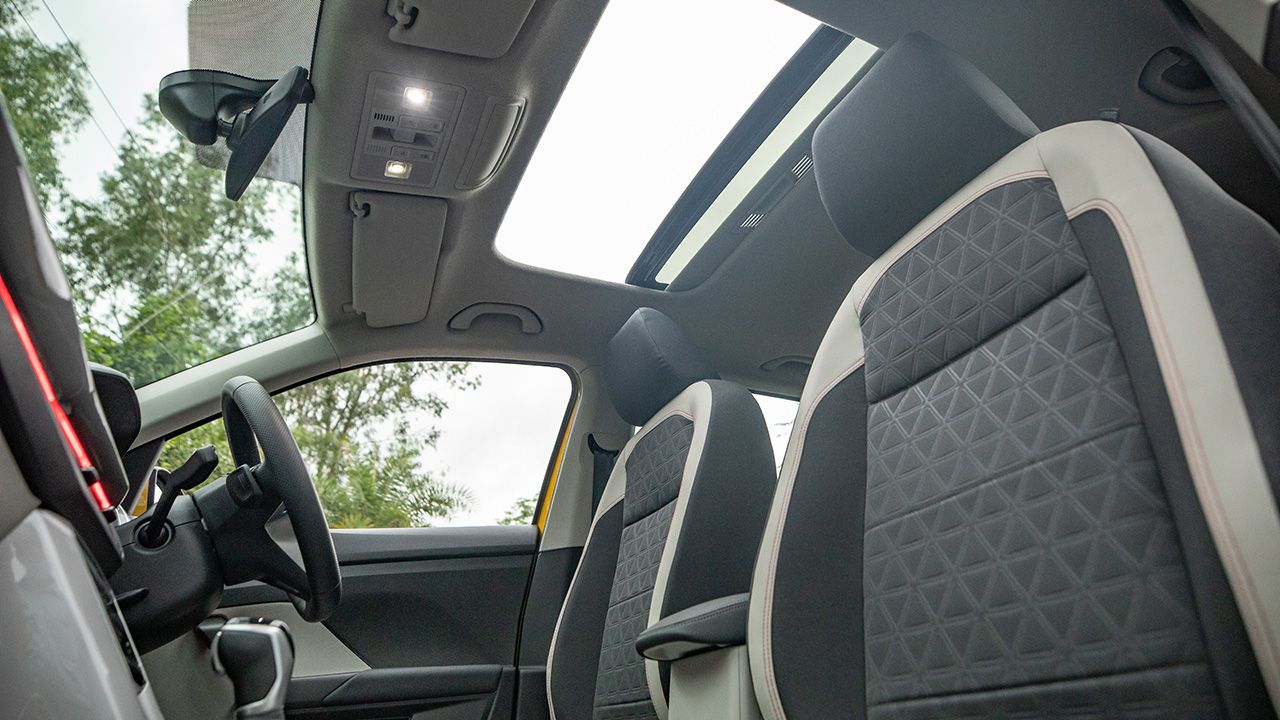 But I think those are smaller issues when you view the Taigun’s greater qualities and how it, along with the Kushaq, brings in much more choice and a genuine driver’s SUV into the Indian market. It’s great to drive, practical and looks good. The final question then is going to be one of value, and that is something that Volkswagen can’t afford to get wrong. The pricing of the Taigun must be spot-on vis-à-vis competition and what it offers as a product, and if VW can get that right, then the Taigun offers a vivid prospect for Indian customers looking for a mid-size SUV.

X-Factor: With its assertive design, good-looking interiors, and excellent driving appeal, the Taigun offers a lot to customers looking for a mid-size SUV.