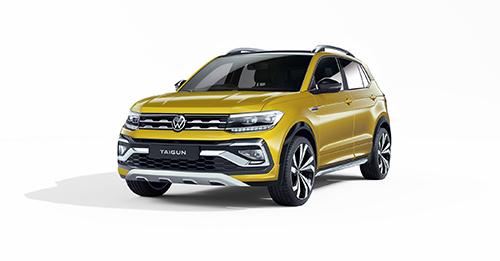 A few days prior to the Auto Expo 2020, at the Skoda Auto Volkswagen India Group night, the India-bound Taigun was unveiled. At the event Volkswagen confirmed that the Taigun will be launched around mid-2021. The Taigun will be based on the MQB A0 IN, a heavily localised iteration of VW Group's MQB platform. Measuring roughly 4.2 metres in length, the Taigun, when launched, will go against the likes of the Hyundai Creta, the Kia Seltos and the likes.

In terms of design, the VW Taigun follows the family design philosophy and gets a wide chrome grille up front along with chrome surrounds for the fog lamps as well. The LED headlights, large front air dams and the silver skid plates give it a aggressive stance. The LED taillamps are connected by a bar that runs across the width of the bootlid. Expect the interior to be just like all other VW models - clean and well-built.

The Taigun is expected to be launched with two engine options - 1.0-litre and 1.5-litre turbo petrol options. The Tiguan will be on offer with a 6-speed manual as well as a 7-speed DSG.  Volkswagen is working hard to increase localisation to nearly 95 percent. This should surely given the German auto giant a cost advantage. Expect the Taigun to be priced in the Rs 10-16 lakh range.

The India-spec Taigun will be based on Volkswagen Group’s heavily localised MQB A0 IN platform. Expected to be launched some time in 2021, the Taigun will be priced in the Rs 10-16 lakh price....