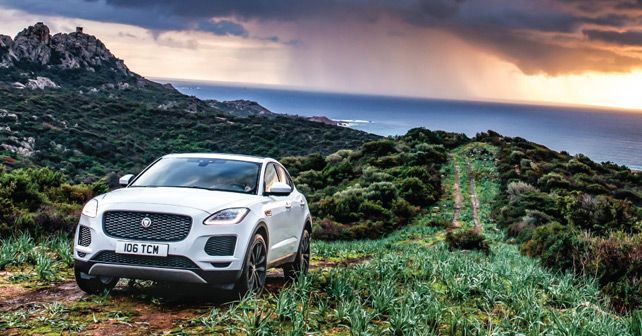 The Volvo XC40 has upset the applecart in the premium compact SUV segment, but Jaguar’s baby SUV looks like a bit of a bruiser – so it’s not likely to shy away from a fight. The E-Pace may not be heading to our shores in the immediate future, but we jump into the driver’s seat to give you an early glimpse of what to expect in future.

After the F-Pace, here’s Jaguar’s second SUV. The F-Pace, by the way, has quickly gone on to become Jaguar’s best-selling machine. So, ask yourself again – is it still sacrilege for Jag to be building big, bulky SUVs?

Well, if you look at the ever expanding number of X’s in BMW’s range or Q’s in Audi’s, you get some sense of just how much Jaguar is yet to catch up. Have no fear, however, the SUVs are now coming thick and fast. The flagship J-Pace is coming soon as well, as you can read elsewhere in this issue.

The E-Pace will be Jag’s baby bruiser. And it certainly looks the part. I won’t hide the fact that I think Ian Callum is one of the best car designers in the world at the moment – and his team has done an excellent job with the E-Pace. At the front, it’s uniquely Jaguar – a distinct brand image that Ian and his team are still trying to cement globally.

Curves in all the right places
In profile, and especially around the rear haunches, the E-Pace has lines and curves in all the right places. In fact, from the rear three-quarter angle, with its voluptuous hips, it looks a bit like a bloated F-Type sports car – in a good way! Take into account the large front air dam on this R-Dynamic spec machine, the low profile tyres, chunky rear and twin tailpipes, and it looks quite purposeful and aggressive indeed. The sloping roof line cuts into the boot space of course, but it looks good. After all, form doesn’t always have to follow function. The taillights are pretty sleek too – and the horizontal LED that runs the width of the light looks a bit like the E-Pace’s heartbeat. 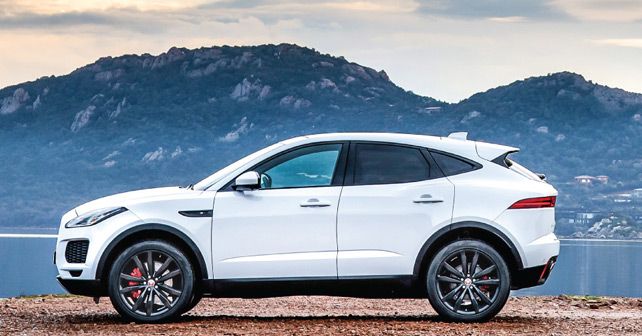 But, does it get your heart racing from behind the wheel – that’s the question? Well, let’s start with the cabin first. Here’s again, like the F-Type, it looks and feels very driver focussed. The one thing that you notice about the cabin right away though is that quality levels have improved considerably – even when compared with the more expensive F-Pace. Everything you touch is soft, feels very tactile, and is quite solid. There’s a chunky grab handle that – like the F-Type – envelopes the centre console around the driver. It’s nicely accented too, with two-tone stitching – just like the dashboard. The three-spoke steering wheel and AC vents are accented with real aluminium. The instrument cluster is a 12.3-inch TFT screen that’s customisable. In fact, you can even have a full display of the map on the screen. The infotainment screen, meanwhile, sits horizontally in the middle of the centre console. The infotainment system itself is fine, but quizzically still doesn’t offer Android Auto or Apple CarPlay. This top-of-the-line HSE trim of our test car offered 18-way power seats for the driver that are very supportive and comfortable. Even at the back, while legroom is at a premium, it is quite comfortable. Of course, there are enough 12-volt charging points and USB ports in the car to satisfy the most avid Apple or Android enthusiasts.

It really is a bruiser
Now, from the driver’s seat, we’ve found that the latest crop of Jaguars have been setting the dynamic benchmark in their respective segments. So, does this hold true for the E-Pace as well? Well, to begin with, at almost 1,800 kilos, it’s quite heavy – heavier in fact than the all-aluminium F-Pace. It’s also heavier than the BMW X1 and Volvo XC40. But, like them, and the Audi Q3, the entry-level models of the E-Pace will be front-wheel drive. The P250 AWD that we’re testing, however, is fitted with a Haldex four-wheel drive system that can send up to 50% of the engine’s power to the rear wheels. From behind the wheel, you can feel the inherently front-wheel drive nature of the E-Pace. If you mash the throttle through the bends, you even get a hint of torque steer initially before the four-wheel drive system distributes power to the rear. But, body control of the E-Pace is very good and it responds eagerly to your inputs. 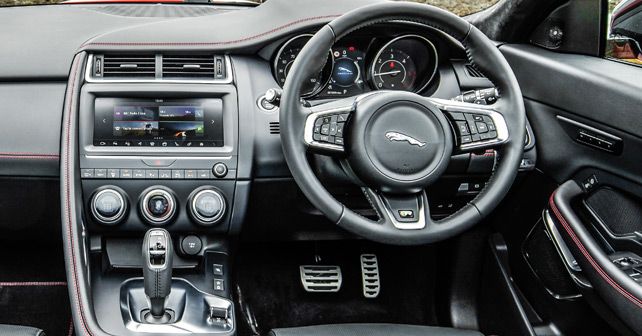 On the whole, it’s sharp and grippy, thanks to the 245/45 R20 tyres. But the ride is quite firm, harsh even over broken roads. Certainly, the 20-inch rims won’t make it to India – but then it won’t look nearly as good on smaller wheels and tyres. Much like the XE, which is a very pretty sedan – until you put on the scrawny wheels and tyres that are destined for India, after which it looks a bit like a supermodel in a lumberjack’s outfit. Unflattering that is, for those of you with a strange lumberjack fetish!

The powertrain, though, is sublime. I absolutely love this new 2.0-litre, four-cylinder turbo petrol Ingenium motor. And while I prefer the ZF 8-speed automatic gearbox, this 9-speed isn’t bad either. The motor is turbine smooth and very responsive, so you don’t mind flooring it to initiate kickdown when you need instant power. You can, of course, use the steering mounted paddles as well.

Clearly, the E-Pace will have its work cut out for it – what with the intense competition it’ll face from the new-and-improved BMW X1, brand new Volvo XC40 and soon-to-be-launched next-gen Audi Q3 (also previewed elsewhere in this issue) – but it’s a very convincing overall package. And very pretty too. But the latest Jags are more than just pretty faces, they’re very compelling from under the skin as well. Now it just remains to be seen if the E-Pace will overtake the F-Pace to become the sales leader of the Jag pack…

The puddle lights display a Jaguar closely followed by its little baby cub.

X-Factor: Another very pretty SUV from Jaguar. Goes quite well too!