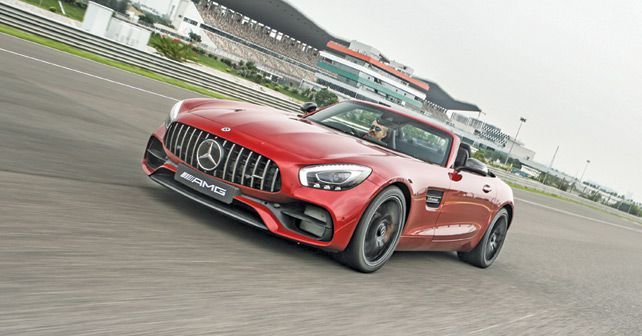 A supercar with a convertible roof can be quite the spectacle – both to drive, as well as to gawk at. With the launch of the Mercedes-AMG GT Roadster, Ishan got to experience both at the Buddh International Circuit. We’re not sure if he was able to feel the wind in his hair though...

Whenever there’s a discussion about supercars, especially amongst the automotive enthusiasts of the world, most people seem to prefer coupes. This preference goes back to the fact that most hardtop supercars are slightly better to drive than their heavier, and therefore slower, convertible siblings. To be honest, I tend to agree with that assessment. However, the technological progress over the years has ensured that convertible supercars are now almost as good to drive as their coupe brethren – and that’s no mean feat.

With this fact firmly in mind, I turned up at the Buddh International Circuit on the afternoon of a beautifully overcast and cool day for my turn to drive the latest supercar to hit our streets – the AMG GT Roadster. Tough job, I know!

Now, I’ve had the pleasure of driving the AMG GT S at the track before, and I have to say that I found it to be a sublime experience. It’s a supercar that offers instant grunt from its 4-litre twin-turbo V8, not to mention handling manners and predictability that would put its elder sibling – the SLS AMG – to utter shame. The responses of the GT, especially at the limit, are completely predictable – whereas its predecessor, the SLS, came across as a car that wanted to bite your head off the minute you took any liberty with it whatsoever. 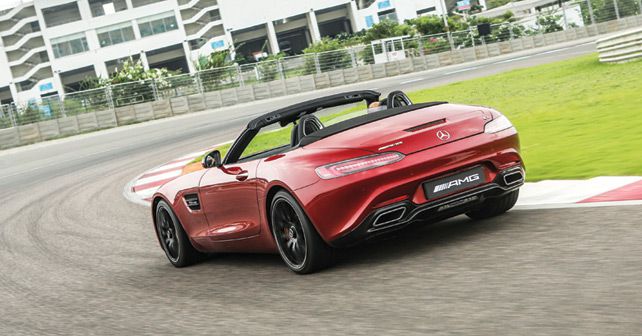 This clearly means that the convertible AMG GT has a large precedent to build up on. It certainly does so on the styling front, with the new AMG ‘Panamericana’ grille drawing inspiration from the 300 SL race cars that competed in the Carrera Panamericana – one of the most gruelling motor races of all time, which took place on the Pan American highway in the 1950’s. So, the AMT GT Roadster has a very aggressive front grille with bold chrome slats that dominate the front end and make it look as though it has the mouth of a big fish that’s all set to devour its prey. Let’s just say that it’s a very clear statement of intent from AMG. On the whole, the AMG GT Convertible is pretty good looking, especially with its top down.

The interior remains largely the same as the coupe, except that with the roof down it feels a lot roomier. But we’re at the track for a specific reason, so it was time to get into the snuggly fitting sports seat and fire up the motor. The next step was to set the exhaust to sport mode for full effect and pelt away from the pit lane. First impressions are fantastic, despite the power being a tad less than the coupe – the roadster has 470bhp versus 503bhp for the hardtop. Nevertheless, the GT feels phenomenally fast and responds instinctively to steering and throttle inputs. 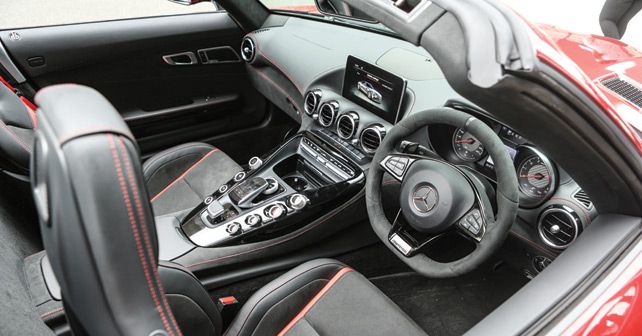 With the top down, the guttural soundtrack of its hand-assembled engine only adds to the driving experience. Despite being slightly heavier than the coupe, and with slightly less structural rigidity, the AMG GT Roadster is perhaps the finest convertible supercar I’ve driven at the circuit. The engine response, suspension setup and neutral handling all make it a real experience to savour. Adding to this experience is the superbly crafted cabin.

If there are any issues at all with a car like this in India – and mind you, I’ve only driven the AMG GT (both coupe and convertible) at the track – it’s that they’re not exactly practical or usable on our roads. However, if you can afford a machine like this, just doing that occasional drive when everything comes together – the car, the road, and the weather – makes the experience totally worth it. And, that being the case, I would probably take the convertible over the coupe. After all, hearing that AMG V8 in full symphony with the top down is an experience of a lifetime.

X-factor: A bi-turbo V8 with an incredible exhaust note that’s attached to a gorgeous machine – what’s not
to love?