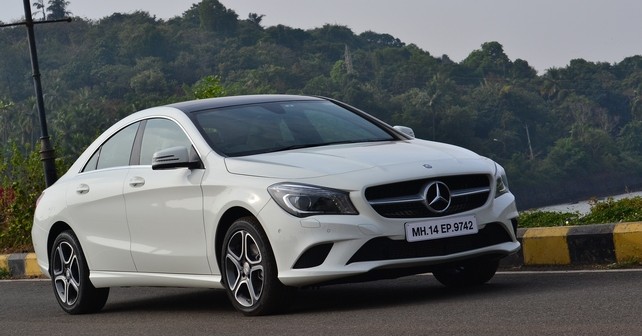 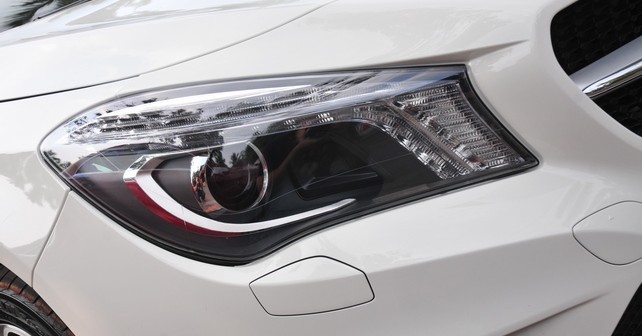 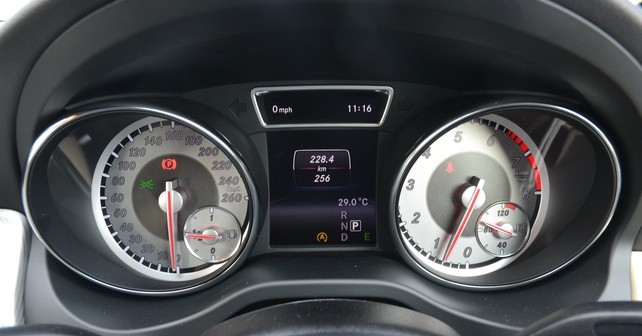 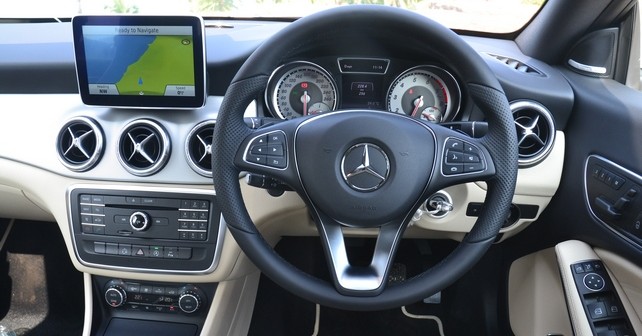 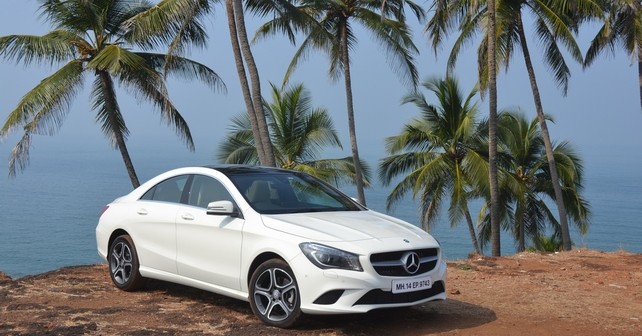 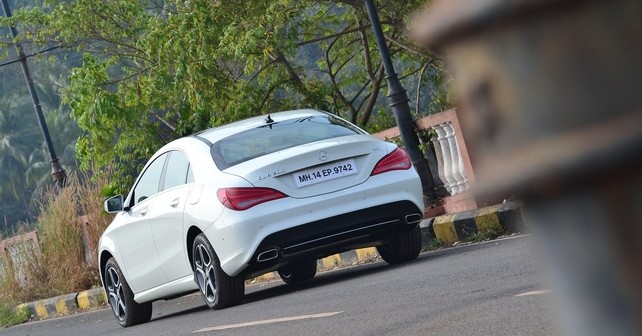 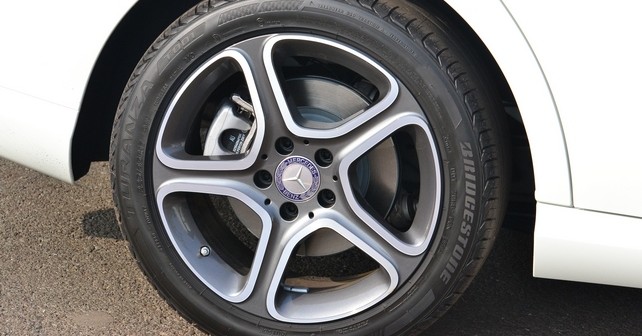 Once in a while, there comes a car that leaves you drooling over it. Mercedes-Benz’s new luxury compact sedan is one such set of wheels that has style written all over it. We take this showstopper of a car for a spin in Goa and do our Mercedes-Benz CLA to see if its performance matches its style.

Last year was a good year for Mercedes-Benz India, as they clocked their highest sales ever and broke the 10,000-unit barrier. They also broadened their portfolio by bringing in the A Class and the GLA, and made the C Class more premium. And so, to fill the gap between the C Class and the A Class, they’ve launched the all-new CLA compact sedan in India – which, according to Mercedes, is the first of 15 products that will be launched this year. We were invited to Goa to drive the new CLA, and from the moment I saw it, I fell in love.

To put it simply, the new CLA is stunning from every angle. It really is a beautiful car. And although it is based on the A Class, it definitely takes a lot of its styling cues from the CLS as well. But we’re no strangers to the CLA, because the CLA 45 AMG has been one of our favourite cars since the time of its launch. But it’s primarily due to the car’s aesthetic appeal that it’s become an instant sensation in the global market. In the US, for instance, 80 percent of CLA owners are first time Mercedes-Benz customers.

The front is borrowed entirely from the A Class, but the mid-section gets more lines and creases to give it a stronger character. The swooping roofline, similar to that of the CLS, and the short rear-end complete its sporty attributes. The rims, which have a unique pattern, are also really nice. The car is so brilliantly designed that once it grabs your attention it never lets go. But, its design is also functional. According to Mercedes, the CLA is the most aerodynamic car in the world, with the lowest drag coefficient. It also has shutters in the grille that close at high speed to improve aerodynamic efficiency. 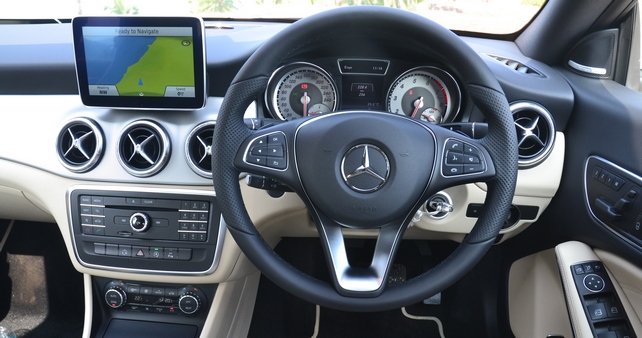 The CLA is essentially a 4-door coupe, and that’s how it feels when you enter the cabin. The cabin is very compact, and there isn’t much to cheer about for rear seat passengers.

The car’s sporty design and swooping roofline means that the roof looms large when you’re seated in the rear and there’s very little headroom. The small windows add to the claustrophobia, and it would be next to impossible to fit three passengers in the back seat. It’s also an arduous task to get in and out of the car from the rear doors. And even though the CLA has a longer wheelbase than the Audi A3, legroom is at a premium at the back. So, this is not the Mercedes you want if you value being chauffeured around.

On the other hand, the front seats are quite supportive and comfortable. The dashboard resembles that of the A Class, and the instrument cluster gets sporty dials. Overall, the use of top quality components are up to the usual Mercedes-Benz standards, but the display screen on the centre console seems like an afterthought.

To separate the CLA from the A Class, it borrows the engines from the GLA. There’s the 2.0 litre turbocharged petrol unit that belts out 181bhp and 300Nm of torque in the CLA 200, while the CLA 200 CDI gets a 2.1 litre turbo-diesel with only 134bhp, but with identical torque. Both engines are mated to the 7G-DCT transmission with paddle shifters on the steering wheel. We drove both variants of the car, and I was quickly impressed with the petrol variant. The CLA 200 is very quick off the line and can reach 100km/h in under eight seconds. The acceleration is linear and seamless, and it has great low and mid-range power as well. The petrol engine is also very refined and quiet.

The CLA 200 CDI, though, is quite the opposite. Sure, it’s well engineered, but it’s loud and not so willing when it comes to acceleration either. It takes a whole two seconds longer than its petrol sibling to reach the 100km/h mark, and it has noticeable turbo lag as well. While the diesel engine doesn’t have the low-end power you’d wish for, it does have a solid mid-range – which is great for overtaking on highways. The diesel engine in the Audi A3, though, feels distinctly more refined and powerful. The transmission too – while it does a very good job on its own – isn’t quite as good as Audi’s DSG in the A3. The gearshifts are smooth and precise, but could be a little quicker in manual mode.

What enthralled me the most during our Mercedes-Benz CLA, though, was the brilliant driving dynamics of the car. While it may not be quite as sporty as its AMG brethren, it does ride quite well – and the overall refinement levels are top-notch. The car handles very well, and, again, it may not be a true sports car like the CLA 45, but the steering is still quick and well weighted. We got to drive on some narrow twisty roads in the hills, and were impressed with the CLA’s handling capabilities. Body-roll is negligible. The suspension does a good job and soaks up small bumps pretty well, but it is slightly on the stiffer side. Its decent ground clearance, on the other hand, is a bonus given the condition of the average Indian roads. During our Mercedes-Benz CLA, we also realised that the CLA is also very stable at high speed, and there’s very little noise that enters the cabin.

And so, if you consider the entire package, you do feel that the CLA is quite an exceptional car. It has killer looks, excellent ride quality, and a powerful petrol motor (or a slightly tame, but very efficient, diesel engine). It also comes with state-of-the-art technology, such as a panoramic sunroof that closes when it detects rain, satellite navigation, regenerative braking that charges the car’s battery, Internet browsing via Bluetooth, a reversing camera, and a Harman Kardon sound system.

But if there’s a reason to buy the CLA, it has to be its stunning style. The cabin may be cramped, but it offers the quality driving dynamics expected of Mercedes. And the driver’s seat is where you should be. Call me shallow, but it had me at ‘Hello!’ 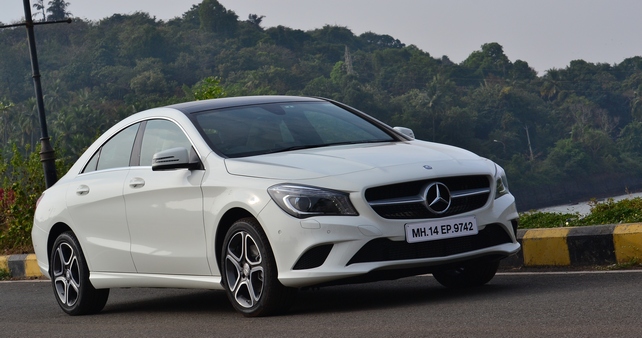