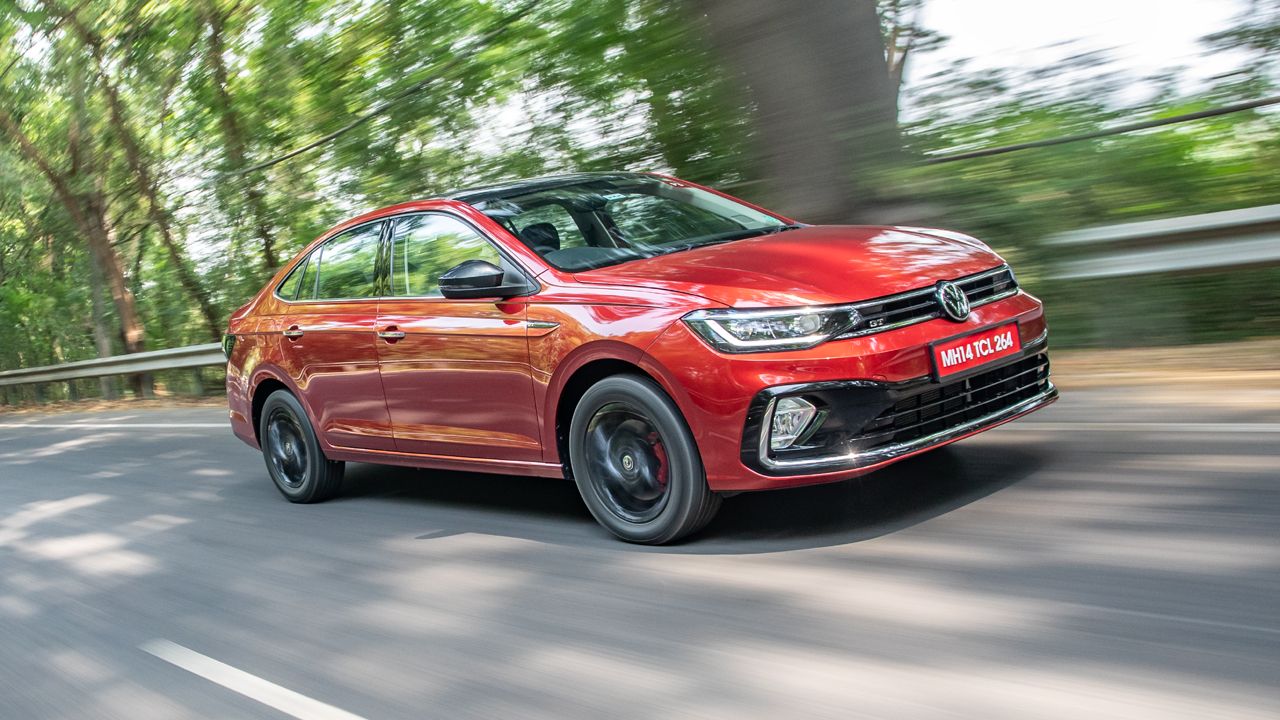 The Volkswagen Virtus is here and it's making sedans great again!

It may not strike you at first, especially if you take a look at Volkswagen’s current lineup in India (I’ll save you the Google-ing – it’s just two SUVs), but VW has a history of making really good sedans. Think about it for a moment. The Phaeton could go down in history as one of the greatest sedans ever – any car with an engineering brief that mandated it to be able to do 300kmph, with the cabin cooled to 22 degrees celsius, while the outside temperature is 50 degrees celsius, can’t not be cool. And it wasn’t just the flagship stuff either, because the Passat is more common than the flu in some parts of Europe, for good reason, and even the more humble Jetta has built up a strong fan following here in India too. And now, the latest in that line is the Virtus. No pressure then, huh? 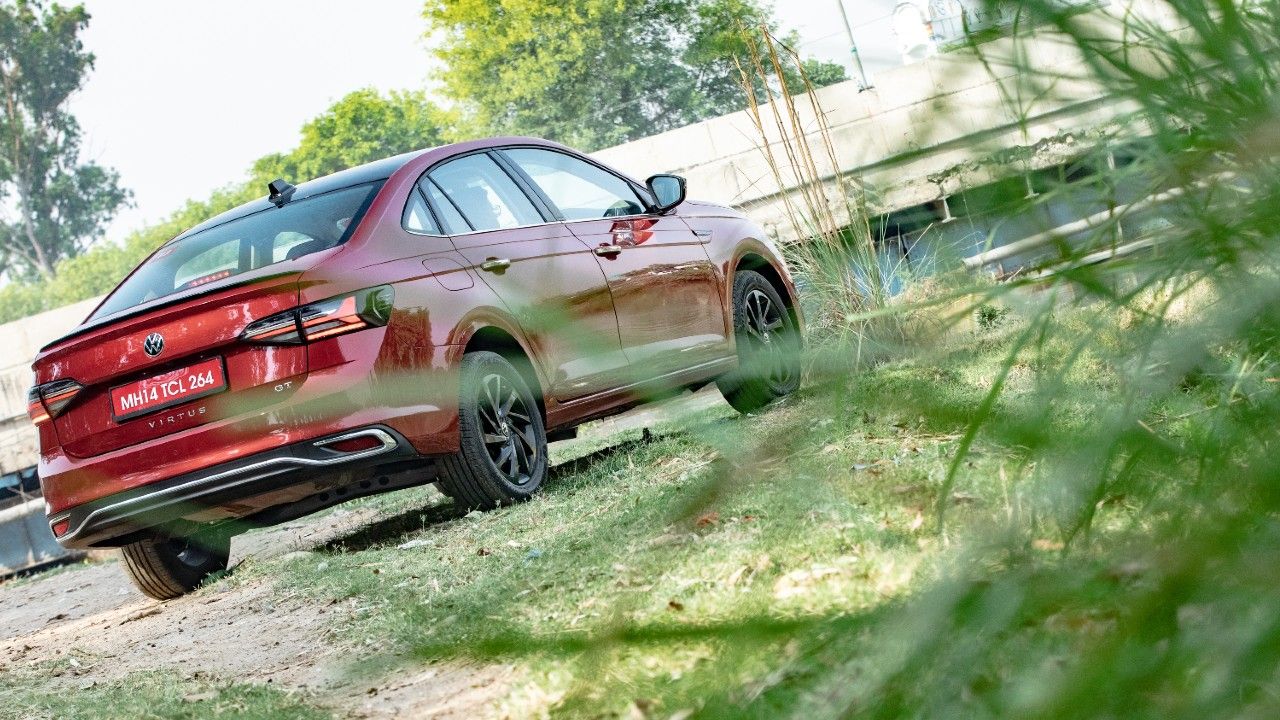 Before we get driving, I must mention that I love the fact that the Virtus carries forward so many elements of the Jetta. The crisp straight lines, the slanted cut out in the head lights and tail lights, even the strong shoulder line – lots of glorious Volkswagen sedan legacy everywhere. The legacy is apparent again as the door shuts with a reassuring thud, after which you can turn your attention to the interior. Poke around the dashboard and you might find that almost none of the plastics are ‘soft’, but most bits higher up in the cabin aren’t scratchy either, everything feels solid. Built to last. VW goodness. Thankfully, that VW goodness carries on as you thumb the starter button, slot the gear stick into drive and get on the road. 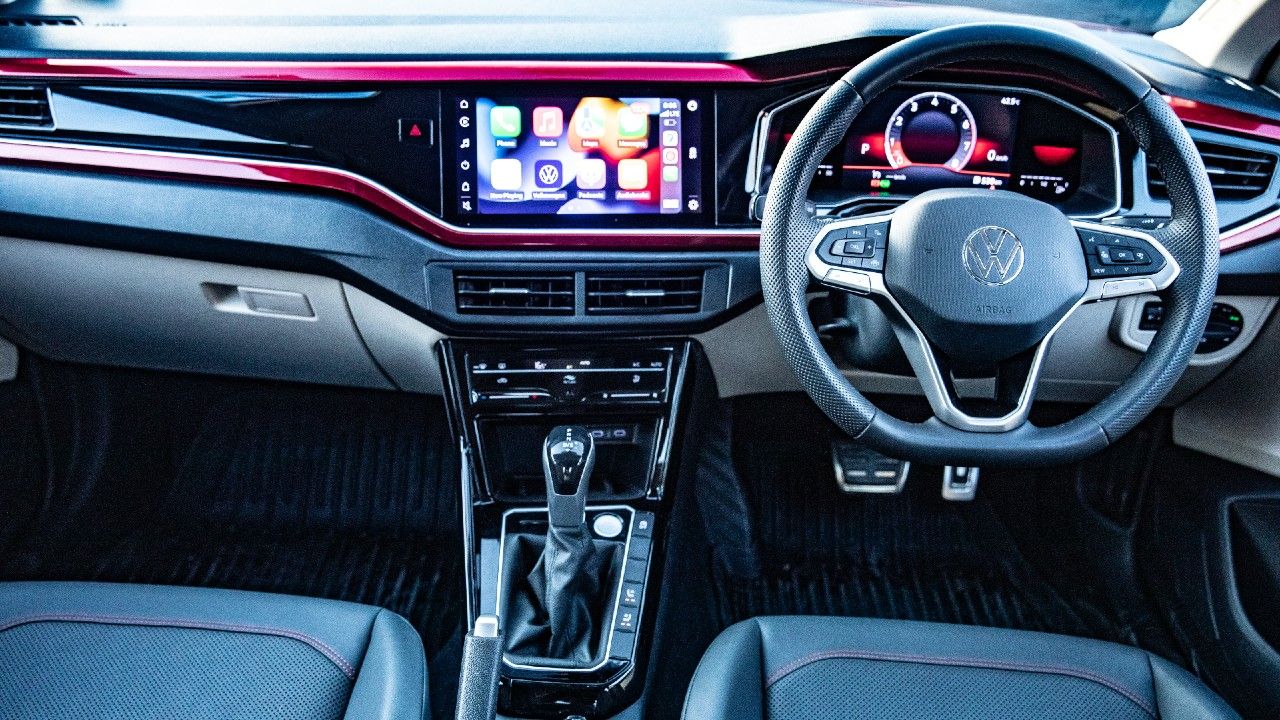 We get our hands on the Performance Line first. You can tell it apart from the Dynamic Line by looking at the GT badges peppered outside, the black rims, red brake callipers, boot-lip spoiler, the black ORVMs and the black roof. Of course, if you get a chance to peek under the hood all doubts will be put to rest because under here is the EA211 1.5 TSI Evo engine, whipping out a healthy 147.5bhp and 250Nm. You can have this four-cylinder with either a six-speed manual or the 7-speed DSG that was giving us company. The combination is sensational. Bonnie and Clyde, pizza and cheese, Jay Z and Kanye West, TSI and DSG – this duo is right up there. In the Virtus, the 1.5-litre engine almost never feels stressed – at 100kmph it is yawning just above 2,000rpm in seventh gear. Poke the aluminium throttle pedal a bit and the change in pace is instant. The VTG (variable turbine geometry) turbocharger spools with urgency and the DSG doesn’t even need to kick down for the car to make swift progress. Prod the throttle further, all the way to the bottom this time and the DSG tends to slot a gear below what would be ideal – essentially letting the car rev out for just a moment, before shifting up and surging forward. I love that. It lets you pause for a moment before the speed piles on. The Virtus is quick. It’s quick on the highway, zippy in the city and quite a hoot around corners too. And thanks to the active cylinder tech and the automatic start/stop function, it’s the bigger 1.5 TSI that’s the more fuel efficient of the two engines. 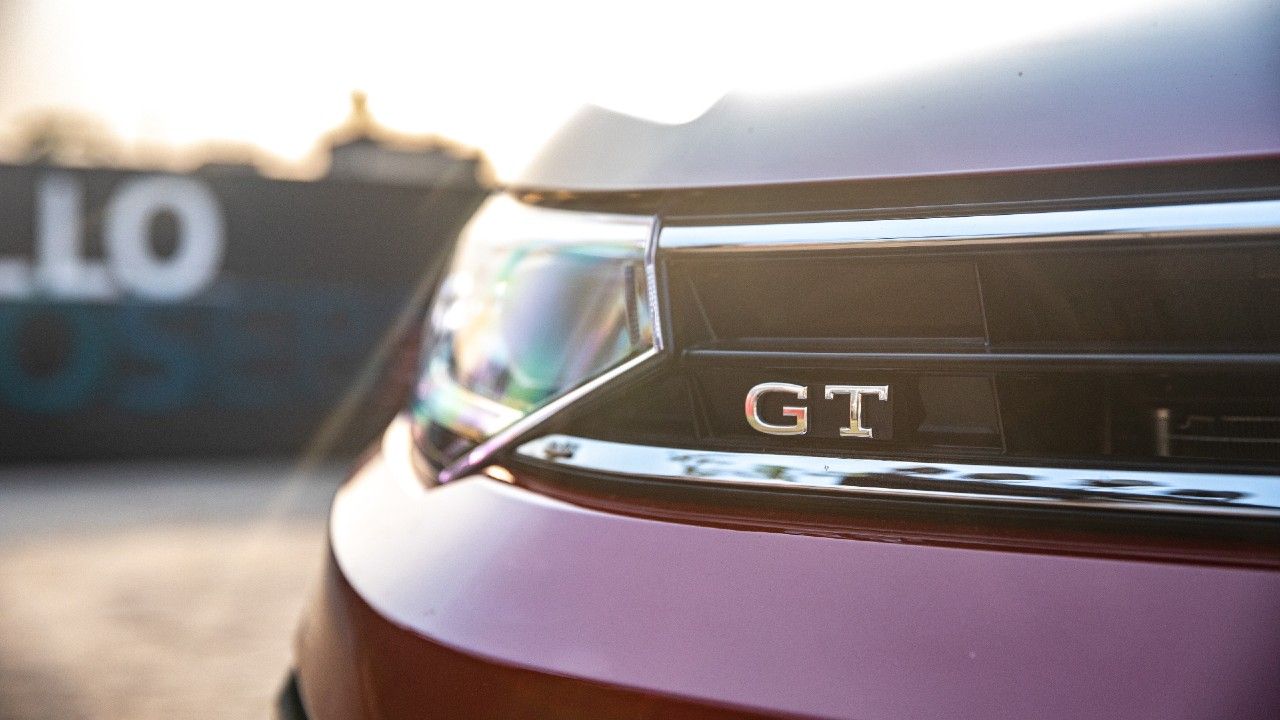 The other engine on offer is the EA211 1.0 TSI three-cylinder in the Dynamic Line. You lose out on some of the power and torque of the 1.5, this makes 114bhp and 178Nm, and the DSG is replaced by a six-speed torque converter but this powertrain is surprisingly good. You’d imagine that driving the two back to back would accentuate the 1.0’s shortcomings, but you’d be wrong. The 1.0 actually feels a touch more sprightly in the mid-range, with a more pronounced shove from the non-VTG turbo and the six-speed torque converter is an intelligent gearbox too. It shifts up quick, kicks down without hesitation and smartly adjusts to your driving-style. It can’t shift as rapidly as the DSG and is a little lurchy when setting off from a standstill, but it’s not something you can’t get used to. Unless you’re really looking for that extra oomph, the 1.0 TSI and 6-speed AT is the powertrain we’d suggest to most. The Dynamic Line also misses out on the sporty styling elements of the GT-badged variants, but the difference isn’t night and day. Definitely not a dealbreaker. 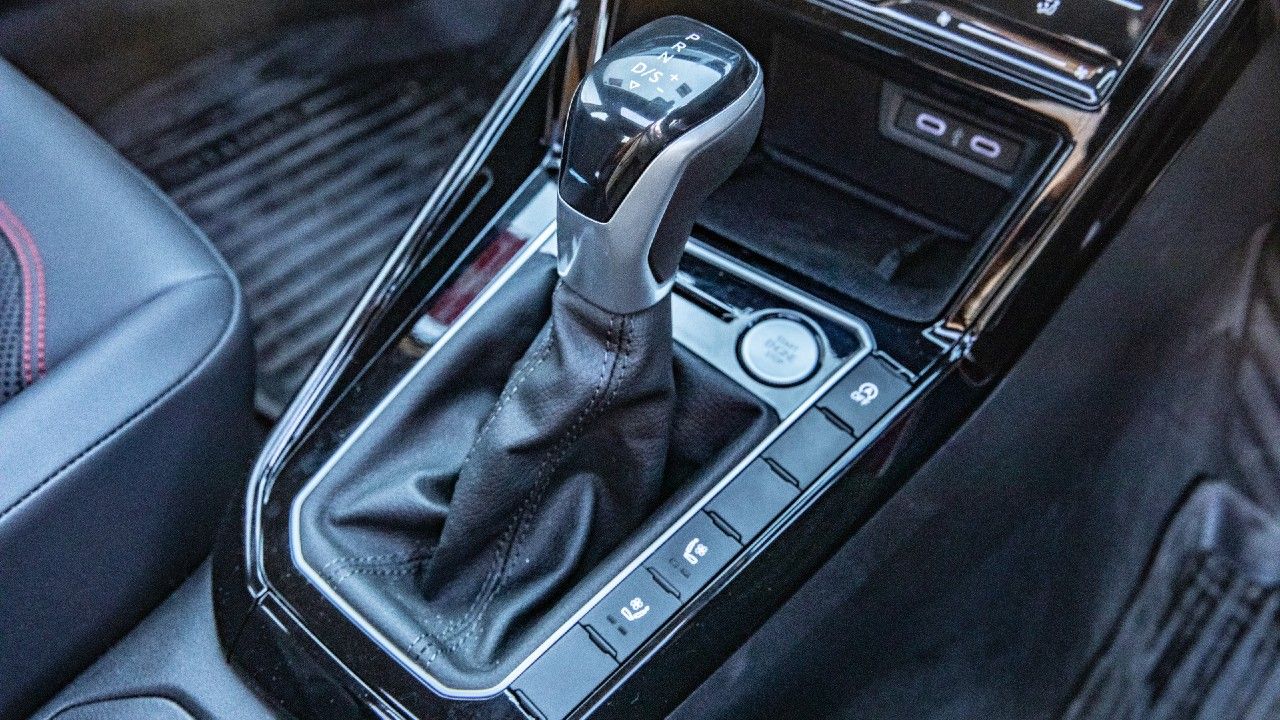 The Virtus feels taut from the moment you set off. Rigid – but not uncomfortably so. It’s not plush, but it won’t make you call the chiropractor after a bad patch of tarmac. It doesn’t shout to communicate what's going on beneath you. It merely tells you. Because of this inherent firmness to the Virtus’ ride, you don’t need to be breaking the speed limit for it to feel sporty. It reminds you of its intentions even at 5kmph. Don't get me wrong, the Virtus is comfortable and it can take bumps in its stride. But it's not a sedan that prefers to waft along and disconnect you from the driving experience. It’s a car that begs you to drive it hard, push it into a bend and then step on the throttle as you exit. There is a bit of roll when you get near the limit, but the Virtus can hold its own in the twisties. The steering is precise, feels like a quality item in the hand and while the plastic paddles aren’t the most rewarding to use, the rake and reach adjustability allows you to get into a comfortable driving position. 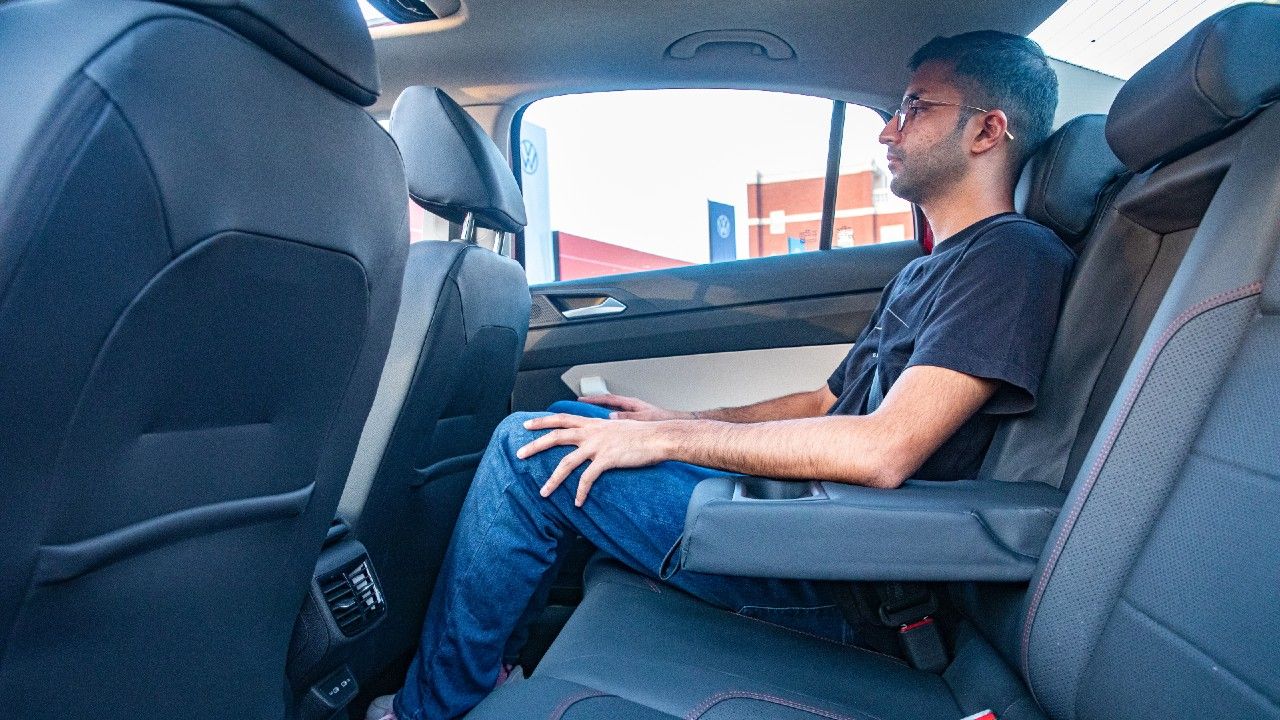 Speaking of comfort, the rear seats are nice too. Under-thigh support isn’t class-leading, but it shouldn’t be particularly uncomfortable even on longer journeys and both knee-room and head-room were adequate for me – I’m 5’11” by the way, even though I like to believe I’m 6 feet. Anyway, back to that rear seat. There are two USB-C ports here, AC vents, an armrest, enough space for three and headrests for them too. But in all honesty, if you could pick where to sit, the driver’s seat is where it’s at.

Like the Taigun, the infotainment screen on the Virtus is one of the best on the market. It may not be as big as the S-Class’, but it is every bit as crisp and colourful (if not more), the touch response is smartphone-quick and more importantly, it is bug free – at least in my use. The fact that it has wireless Apple CarPlay and Android Auto is another plus, but I’d have liked a volume knob. Oh and also like the Taigun, the touch sensitive HVAC controls are silly. They’re fiddly to use while driving and don’t give you much confirmation to tell you whether you’ve actually pressed the right thing or not – most people would prefer plain old buttons and rotary knobs. Very un-Volkswagen-like to let design come in the way of simplicity. The reversing camera is also sub-par, offering a low-res view of the world behind you. But that’s just a hair in the soup because there’s a lot of positives about the Virtus’ cabin. Higher-spec models get a sunroof, ventilated seats (which work well), a wireless charging pad, six airbags, and more. There’s also a rather roomy 521-litre boot and I can confirm that the headliner quality seems to have been upped significantly as compared to early units of the Skoda Kushaq and Taigun. 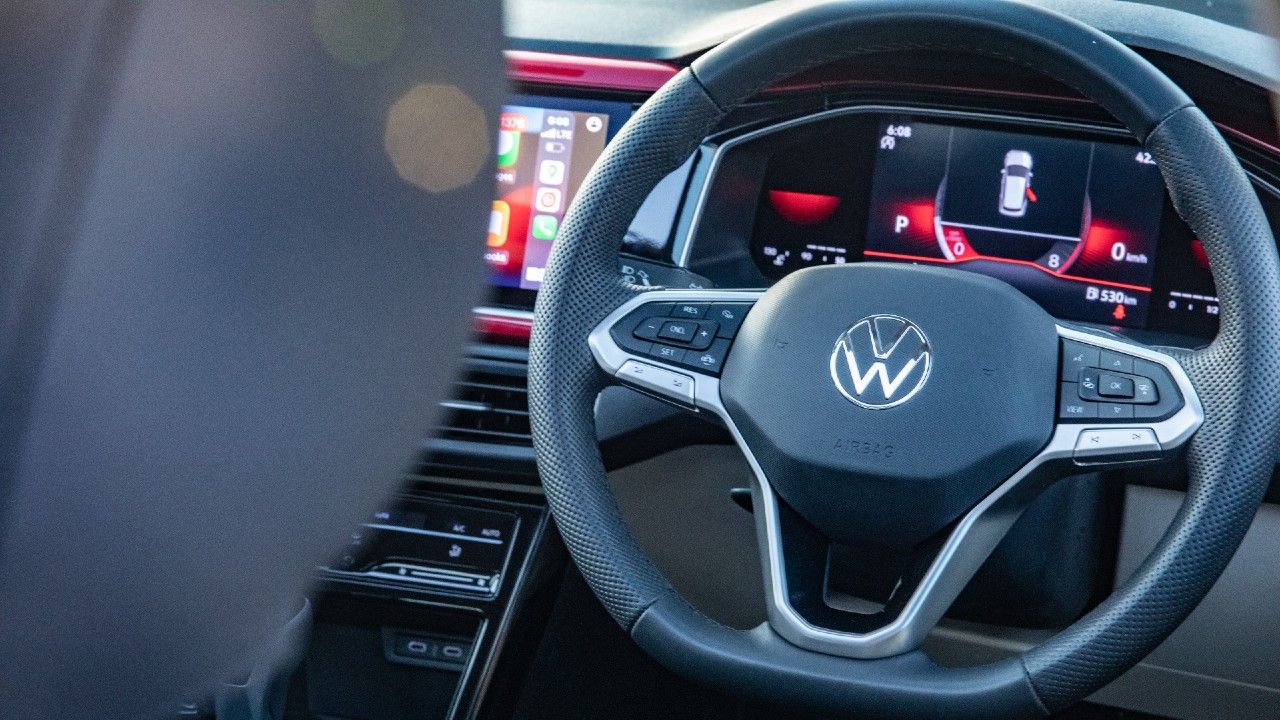 The Virtus is a joy to drive, easily the benchmark in this segment when it comes to plastering a smile on your face – no matter the powertrain. It is comfortable and very well suited to longer journeys not only because of its mechanicals and sure-footedness but also the space on offer and its ground clearance. All the right features are here too and I think the Virtus scores full marks in the styling department as well. Yes, I know, looks can be subjective and all that, but I’m ready to argue with anyone who thinks the Virtus looks bad. The big question now is pricing. We expect it to be priced between the Rs 11-18 lakh range, slotting it just a fraction above the Slavia.  SUVs might be all the rage at the moment, but the Virtus makes a strong case for itself by scoring well in almost every department. Typically Volkswagen. 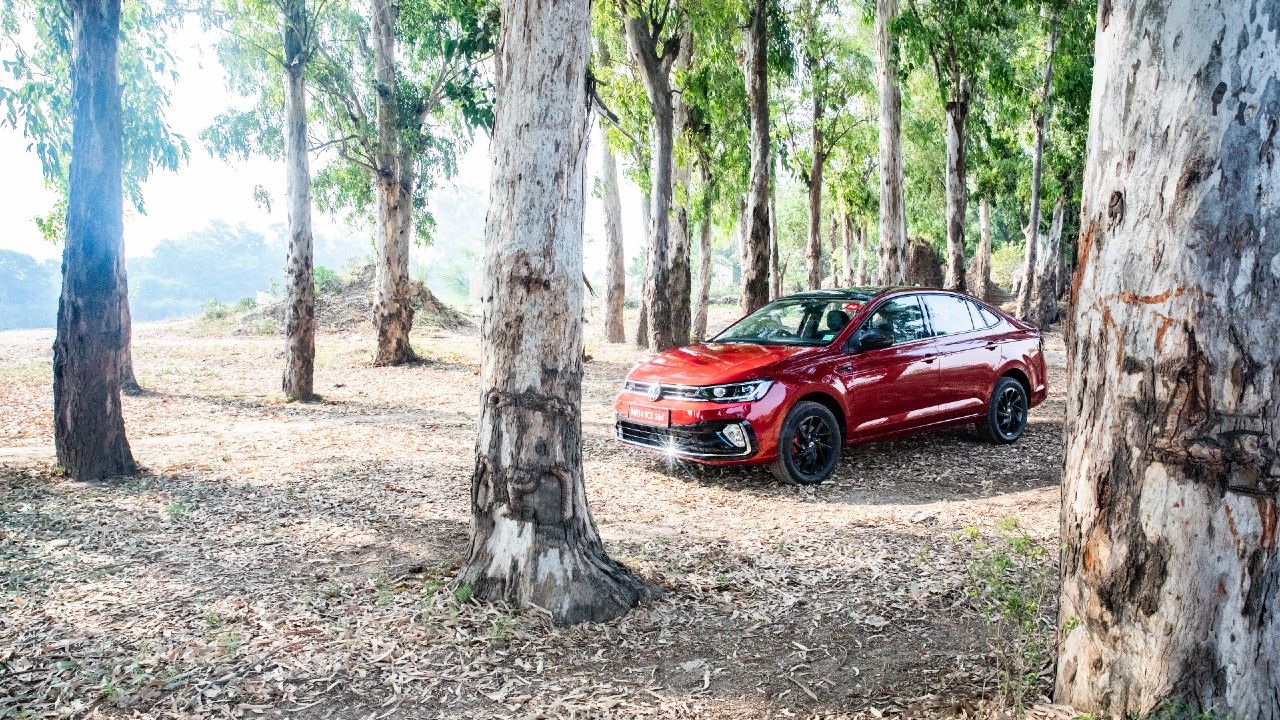 X-Factor: A sedan that can make enthusiasts smile, ferry their loved ones in comfort and look good while doing so. 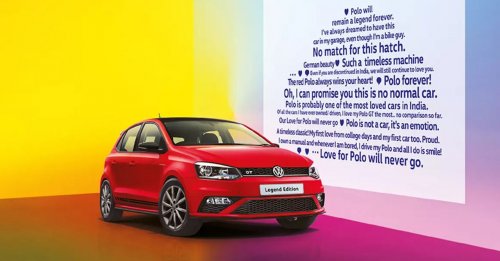 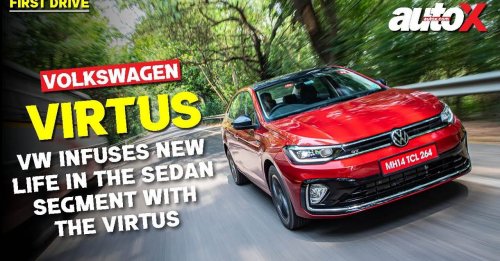 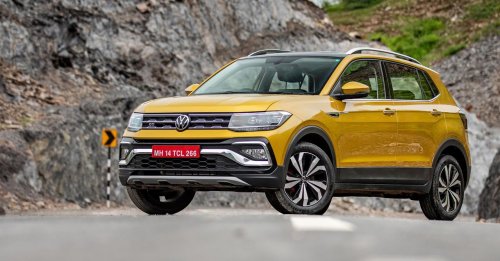 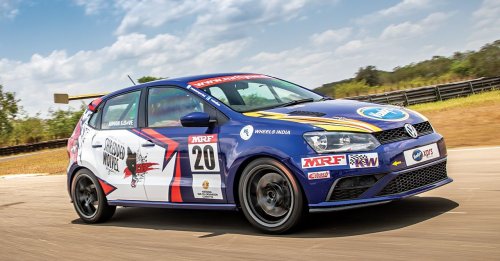 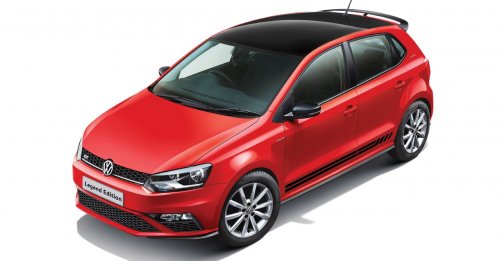 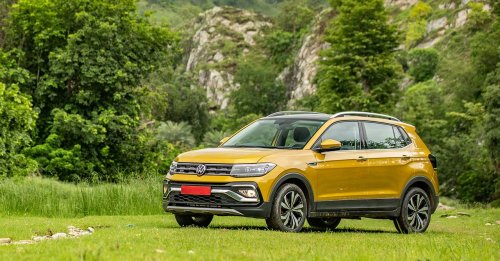