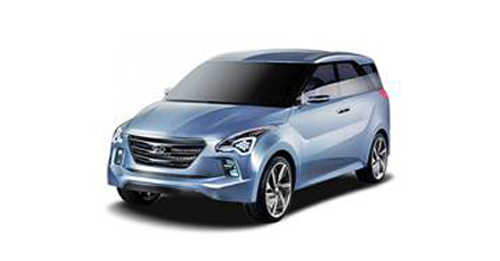 Over the last decade or so, Hyundai has totally transformed itself as a brand in India. The Korean auto maker has been on a roll off late, registering some impressive sales figures in the country month after month. Hyundai gave us a glimpse of the product that they plan to enter the crucial MPV segment with at the 2012 Auto Expo. Say hello to the Hexa Space Concept. As per reports, it will be based on the same platform as the Grand i10. The Hexa Space will be a seven-seater but unlike traditional MPVs, this one is going to be a bit of looker - just look at the concept model! At the moment, it’s not clear as to what powertrain options it will have at the time of launch. That being said, we expect it to come in both petrol and diesel versions. The former may come fitted with the Verna’s 1.4 or 1.6-VTVT petrol engines while the latter is also expected to feature the sedan’s 1.4-litre CRDi motor, initially. Given how well Hyundai cars are spec-ed up, the Hexa Space will also be loaded to the gills with features and equipment, while the built quality and fit and finish will be up there with the segment best. When launched, the Hexa Space will compete with the likes of the Maruti Suzuki Ertiga and Honda Mobilio. Expect its prices to hover between Rs 7 lakh and Rs 10 lakh. Currently, Hyundai hasn’t announced a launch timeline for the Hexa Space, however, it is expected to come in only after they bring in their compact SUV Carlino next year.