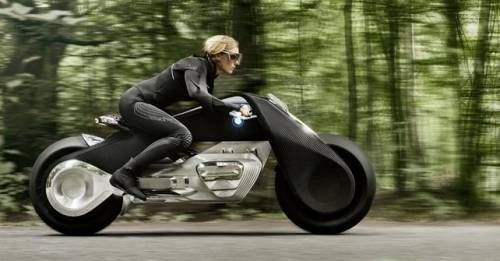 BMW Motorrad unveils the fourth and final Vision Next 100 concept to round off the BMW Group's centenary celebrations.

2016 marks BMW’s centenary, and the company has been celebrating it in a unique way. As part of its 100th anniversary celebrations, BMW revealed three new concepts from its Mini, Rolls-Royce and BMW brands earlier this year. Now to round off the celebrations, BMW’s motorcycle division, Motorrad, has unveiled a unique and futuristic virtual reality motorcycle.

Christened the BMW Motorrad Vision Next 100, the concept motorcycle packs some mighty tech, which if BMW is to be believed, will become reality in the next 30 years or so. The motorcycle concept is inspired by the company’s first motorcycle, the R32. But unlike the two-cylinder combustion engine that the original bike came fitted with, the concept version features an electric powertrain. But, that’s where the similarity between the two ends. In fact, the Vision Next 100 motorcycle is nothing like a conventional motorcycle.

First up is the chassis, which in company-speak, is called “Flexframe”, and adjusts itself when the rider steers the handlebar. BMW also claims that there’s no need to wear a helmet or any safety gear to ride this motorcycle! And that’s because it comes with self-balancing gyro system that will make it impossible for you to tip over the motorcycle – even when stationary. There’s however a riding suit for the rider that comes with embedded vibrating elements in leg and arm sections so as to communicate navigation instructions as well as warnings to the rider.

The rider also gets those cool looking glasses that display information in addition to providing wind protection. Among some of the functions, it can display ideal cornering lines, safety information, rear view, lean angles, etc. The glasses will function based on the rider’s eye movements. Like, when the rider looks down, the menu for various systems will pop up while looking up will bring the rear view from the camera.

As you can see in the images, the bike doesn’t have any suspension components. And that’s because it comes shod with “Variable Tread” tyres that can absorb bumps or road undulations while also providing maximum grip in different conditions.

To sum it up, BMW says the Motorrad Vision Next 100 “embodies the BMW Group’s vision of biking in a connected world – an analogue experience in a digital age.” And if the future of motorcycling is going to be that tech-laden, you can't help but embrace it.