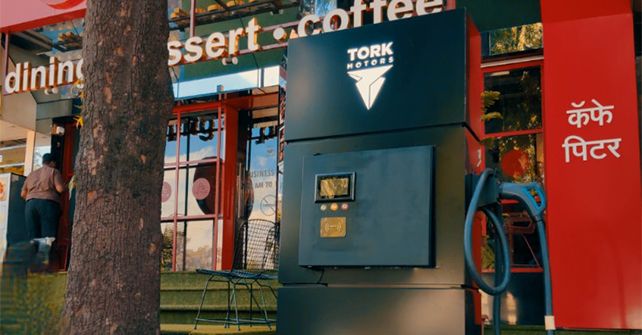 Tork Motors has set up its first EV charging station in Pune. The company started work on their high-performance electric motorcycle in 2015, and the first prototype was unveiled a year later.

Speaking at the launch of the first charging station, Kapil Shelke, Founder and CEO of TORK Motors said, ‘With the launch of our first EV charging station, we seek to drive the adoption of e-vehicles and especially electric motorcycles in India. We are excited to unveil the first public fast-charging station in our home city of Pune and consider it to be a step towards creating an easy to discover and accessible TORK Charging Network. This move is also in line with our growth plans for offering a holistic and hassle-free experience to the consumer.’

Tork Motors will soon launch their first product – the T6X – in India. Powered by a 72Ah Lithium-ion battery, the motorcycle gets a 6kW DC motor that develops 27Nm. Tork Motors claims that the T6X can achieve a top-speed of 100km/h. At the time of unveiling, the company announced that 80 per cent of the charge can be achieved within one hour and a full charge would take about 2 hours. The Tork T6X is expected to be rich in features as well. It comes fitted with disc brakes at the front and the rear, a TFT instrument cluster, ABS, and more.