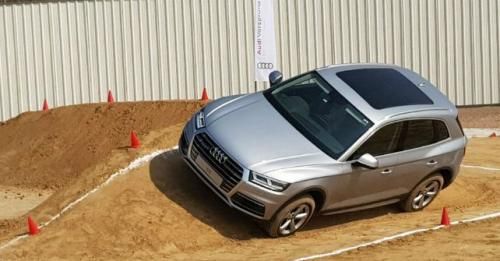 This second-generation Audi Q5 will only be available with the 2.0-litre diesel motor to start with.

Audi took the wraps off the second-generation Q5 last year at the Paris Motor Show in September. The Q5 has been one of the most popular models for the brand with 1.6 million units of the first-gen model sold across the globe. In India too, the Q5 has scored rather well on the sales charts. It is no wonder that the company has brought in the updated model less than four months since its global unveiling. The new Audi Q5 has been launched in two variants - Premium Plus at Rs 53.25 lakh and Technology at Rs 57.60 lakh (ex-showroom).

The Q5 is based on Volkswagen’s MLB Evo platform – the same one that also underpins its larger sibling Q7. Speaking of which, the new Q5’s design also mimics its larger sibling. The overall design is more chiselled with a sharper shoulder, slight creases on the bonnet and that wide hexagonal face. Like most other Audi’s on sale, this one too comes fitted with the Matrix LED headlamps. The tailgate has been redone too. Other design changes at the back include LED taillamps, new bumper, and rear diffuser. 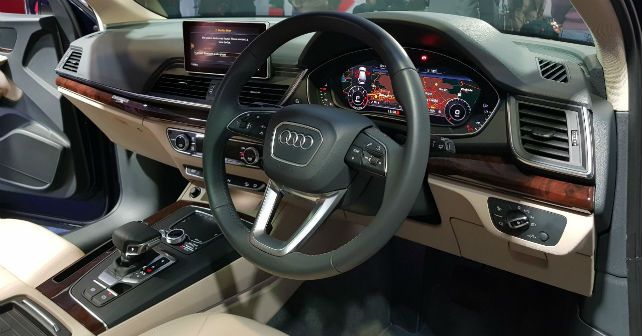 Despite being longer and taller than the outgoing model, the Q5 is 90kg lighter. This can be credited to the new platform and the extensive usage of aluminium and high strength steel to keep the weight in check.

Inside, the Audi Q5 gets a dual-tone black and beige dashboard that is dominated by two screens – a 12.3-inch screen for the Audi’s Virtual Cockpit and a touchscreen unit for the infotainment. There is more space in the cabin than the previous generation model and at 510 litres the boot is massive too. In terms of features, the Q5 comes with a head-up display, cruise control, panoramic sunroof, electrically adjustable front seats, three-zone climate control and more.

At the time of launch, the Q5 will only be available with Volkswagen Group’s bread and butter, 2.0-litre diesel mill that is good for 187bhp and 400Nm. This engine is mated to a 7-speed S tronic transmission. Audi will offer the Quattro all-wheel-drive system as standard in the Q5. The car can do the 0-100km/h sprint in just 7.8 seconds and record a top-speed of 218km/h. The German car maker may not bring a petrol engine variant in the near future.

Audi’s mid-sized SUV enters the Indian market just a month after Volvo brought in their contender in the class, the XC60. Aside from the Volvo, the Audi will also compete against the likes of the Mercedes-Benz GLC, the BMW X3, and the Land Rover Discovery Sport. We have already driven the new Audi Q5, read our review here.