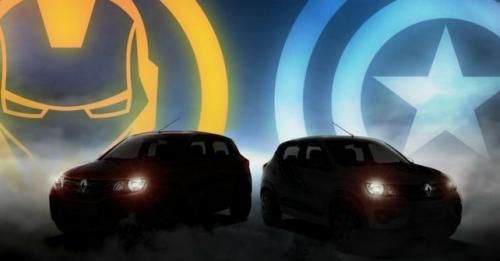 The Renault Kwid is all-set to get some superhero inspired paint schemes.

The teaser’s tagline ‘your favourite super heroes join forces to inspire India’s favourite car’ ensure that the two Avengers-themed Renault Kwid models, most likely limited editions, will be launching soon in India. In the past, Renault has managed to keep its strong selling Kwid in the limelight by launching various limited and special editions of the car like the Climber and the Live For More.

Expect the Avengers-themed Kwid variants to have Iron Man and Captain America inspired decals and graphics on the outside and a contrasting colour scheme in the interior. However, just like all limited-edition models, expect these variants to have no mechanical changes at all.

The Renault Kwid is available in two engine options – a 0.8-litre petrol that generates 53bhp of power and 72Nm of torque and a 1.0-litre petrol that produces 67bhp and 91Nm. The smaller engine only comes mated to a 5-speed manual gearbox, while the bigger one also offers an automated manual transmission (AMT) as an option.

While the bigger engine is quite likely to get the special edition variants, it’s not known if Renault will offer them on 0.8-litre versions as well. Since most changes to the Kwid Avengers edition will be cosmetic, expect only a minor price bump on these models.