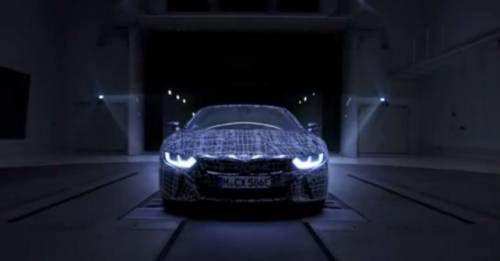 The BMW i8 Roadster was a long time coming. Now, BMW is finally hinting at an imminent release.

In 2016, German car-maker BMW had confirmed that a drop-top version of its i8 electric supercar was under development. The car itself has been spied testing many times. Looks like its development will come in to fruition very soon.

BMW has dropped an official teaser video of the upcoming i8 Roadster.  The teaser shows a camouflaged avatar of the i8 Roadster with a core focus on its aerodynamics. Expect the i8 coupe’s hard roof to make way for a cloth soft-top. Also, the teaser hints that the convertible roof will be a targa-style one.

BMW claims to have marginally improve the Roadster’s efficiency – it now sips 2-litres of petrol per 100 km, up from 1.9-litres per 100 km of the coupe. The Bavarian automaker as of now is tight-lipped on any other mechanical changes to the i8 Roadster over its coupe counterpart. But it is very likely that the Roadster will continue to possess the coupe’s mechanical prowess.

The BMW i8 coupe has been on sale globally since 2013, and has since created a unique niche for itself. Being a hybrid it draws power from two different sources – a 1.5-litre three-cylinder turbo petrol engine, and an electric motor. Both of these work in perfect symphony to churn out 357bhp of power and 570Nm of torque. This allows the hybrid supercar to reach 100 km/h from a halt in just 4.4 seconds.

The new GST regulations have come in as a horror tale for hybrid vehicles in India. The FAME subsidy which greatly benefitted the hybrid cars has been discontinued, as the overall taxation rates have shot up by almost 13 per cent. Thus, hybrid vehicles have become substantially more expensive in the country – the i8 coupe witnessed a price-hike of Rs. 4.8 lakh post July 1, 2017.