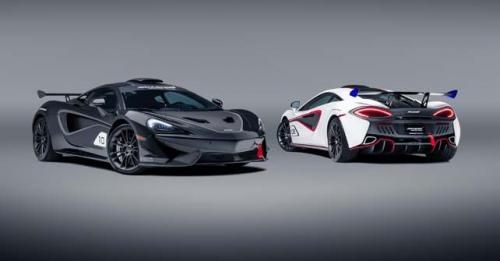 Based on the 570S, the MSO X is a limited-run model that's inspired by the company's endurance racing heritage. Only 10 units are made.

McLaren’s Special Operations has built a limited-run edition of the 570S. Billed as the MSO X, this new McLaren is a race-inspired version of the 570S GT4 race car, albeit it’s road-legal. Only 10 units are produced and have already been dispatched to customers – all of which are from the US.

So, what’s special about the MSO X? For starters, there are new front and rear bumpers, Le Mans inspired paint schemes and, most importantly, a huge rear wing that makes this limited-run model stand out. Not only does it make the car look sporty but also generates 100kg more downforce. Additionally, there’s a roof scoop that helps channel air into the engine, and as per McLaren this creates a unique induction noise in the cabin. Apart from this, there’s a new titanium exhaust that helps produce more exciting noises.

Inside, luxury is limited to a bare minimum, but you do get some of the basic equipment such as air-conditioning, parking sensors, nose-lift function to go over speed bumps and a rear-view camera. However, the cabin also houses a few more racing oriented features. First off, there’s a lot of carbon fibre on the steering wheel as well as the centre console. The seats are also made of composite material. And yes, both seats come with a six-point racing harness. You also get space behind the seats to keep your helmet. In addition to that, there’s McLaren Track Telemetry available onboard that lets you check and review your lap timings.

The powertrain is unchanged from the standard car, meaning the MSO X is propelled by the same 3.8-litre twin-turbo V8 that churns out 562bhp and 600Nm of torque. Power transmission duties are carried out by a 7-speed dual-clutch automatic. Performance figures should be more or less identical to the standard car – 0 to 100km/h in 3.2 seconds, 0 to 200km/h in 9.5 seconds and top speed of 328km/h.