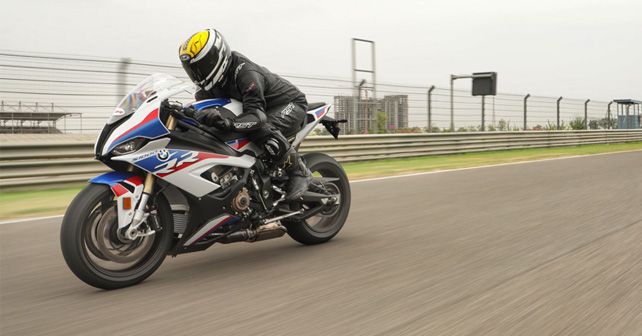 We test BMW’s new S 1000 RR at the BIC to see if this third-gen model can become the litre-class top dog – as its predecessor was a decade ago.

2009 and ‘10 were a struggle. The world was going through a rough phase, and we were still recovering from the so-called ‘Great Recession.’ There was an extreme economic slowdown everywhere – the banks were tanking, and factories were shutting down. In spite of all this, BMW Motorrad decided to enter the litre-class superbike segment with an all-new motorcycle. And, thus, the S 1000 RR was born.

At first, BMW’s decision to venture into the litre-class superbike segment looked quite illogical, absurd even. You see, it was a period of Japanese supremacy. The segment was ruled by the likes of the Honda Fireblade, Yamaha R1 and Kawasaki Ninja.

So, what could BMW Motorrad, which was only known for making plucky GS bikes and tourers back then, have possibly brought to the table? Heck, they didn’t even have a racing team in MotoGP or any other road-racing series to back their new product’s credentials. And to make matters worse, the silly ‘asymmetrical’ face of the so-called BMW litre-class superbike made it look like that the Germans were really out of their depth.

But then the world got their hands on the S 1000 RR, and the rest, as they say, is history! The original S 1000 RR turned out to be an absolute masterpiece. Upon its launch, it instantly became the top-dog of the litre-class segment. It was simply relentless in beating the pants off its rivals. Moreover, it was the first superbike to introduce electronic rider aids, like traction control and a quick-shifter. The S 1000 RR was a phenomenon in every sense of the word.

But all this happened about a decade ago, and times have since changed. In short, the competition caught up with the S 1000 RR, and some of them even surpassed it. Of course, to remain relevant in the game, BMW gave it a substantial upgrade in 2015, but, unfortunately, it wasn’t enough to get the bike to reclaim its former top position.

And so work began on an all-new third-gen model, which made its global debut in 2018. The good news is that it has now made it to India. And the best part is that BMW allowed us to ride it at the BIC. So, can the new Double R rewrite the rules of the litre-class segment?

Anger management
BMW claims that not a single bolt from the old bike has been reused in this third-gen model – meaning that it’s been built completely anew from the ground up. That sounds great! But still, there are a handful of people – including me – who miss the alienesque asymmetrical headlamps of the old model. The new S 1000 RR features a pair of sleek LED headlamps. Sure, it looks prettier now, but it lacks the aggression of the old model – which had a bite-your-head-off kind of vibe. For me, and many others, that predator face of the old model was its signature dish. Anyway, BMW knows better. Plus, the new conventional face, with LED lamps, is lighter and will definitely appeal to a wider audience. 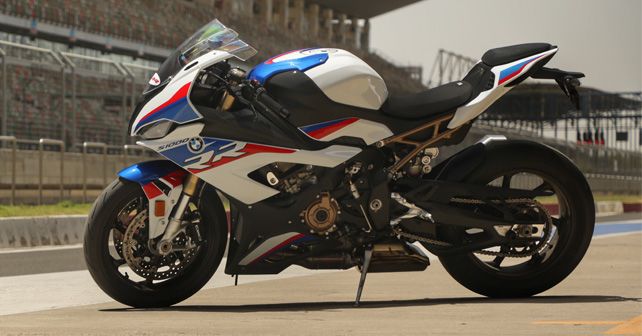 Everything that you touch and feel on the bike is top quality. Also, the company’s revered M moniker – so far reserved for fast BMW cars – has made its way to the S 1000 RR. This means that it now gets a special M paint scheme, with racing red, blue and white colours. Additionally, the M-Package also gets tasty lightweight carbon-fibre wheels.

Speaking of weight, at 197kgs, the new RR is 11kgs lighter than its predecessor, while in M-Spec, it’s even lighter – only 193.5kgs. On the whole, it’s a spectacular motorbike from every angle. It may not be as brawny as the old one, but it’s a lithe-and-mean machine nonetheless.

Lightness everywhere
‘Lightness’ was the buzzword during the launch of the new S 1000 RR. BMW claims to have shaved kilos and grams from anywhere they could. The main contribution, however, comes from the engine, as it’s a full 4kgs lighter. That, however, is just the tip of the iceberg, for there’s so much more to this new powertrain. The 999cc in-line-four is all new, but retains the bore and stroke of the old bike (80mm x 49.7mm). And it’s got a few new tricks up its sleeve.

First up, it gets BMW’s ShiftCam technology, which basically varies valve timing and valve stroke on the intake side. It sounds complicated, but it’s quite straightforward to understand. There are two sets of cam lobes – one for low-rpm to boost low-end torque and improve efficiency, while the other to offer more lift at higher rpm to enhance the top end. The latter kicks in at 9,000rpm in just 10 milliseconds! Coupled with the ShiftCam tech are 10% lighter hollow-bored titanium valves, meaning that the engine now goes all the way up to a 14,600rpm redline – 400rpm more than the old bike. 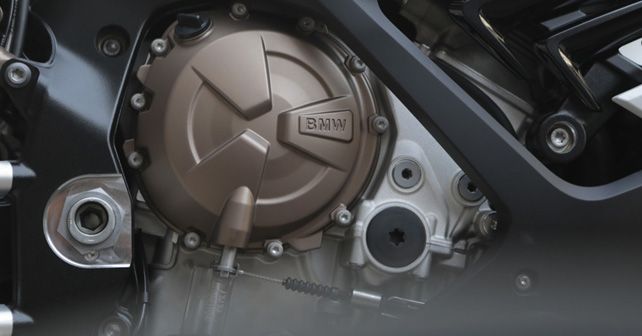 All of the above updates result in a power bump of 8bhp, which means that the peak horsepower output has now crossed the holy 200bhp barrier – it’s now 204bhp. Torque is identical at 113Nm, but it’s now produced at 500rpm higher – at 11,000rpm. But because of the ShiftCam valve timing, BMW claims that at least 100Nm of torque is available from as low as 5,500rpm.

Fast, furious & forgiving
On a power circuit like the BIC, gauging the low- and mid-range performance of a litre-class motorcycle is a little difficult. It’s all about sniffing apexes through the fast-flowing layout of the track. And doing that on something as powerful and light as the RR requires a bit of courage, and a great deal of trust in the almighty.

You see, the engine is a nuke! It’s so throttle-happy that nothing can prepare you for the all-out assault that it launches on your sensory organs once you twist your right wrist. It took a while for my brain to register the way speed builds up on this thing. Of course, being an inline-four, the motor doesn’t quite hammer torque like, say, the Ducati Panigale V4 at low revs, but it rushes in after 10,000rpm – and how! All I can say is that it’s mind-bendingly quick. 260 – 270km/h on the back straight can be achieved without any effort. And while you’re at it, the motor shrills and howls, producing that typical inline-4 harmony. Absolute bliss!

Usually, when you’ve got 200+ raging horses between your legs, whacking the throttle open around corners or on straights is nothing short of a serious death-wish. And yet on the S 1000 RR, you always get the sense that everything is under control. Why? For two reasons. First, the handling is simply epic. Thanks to its lightweight ‘flex’ frame, Marzocchi front forks with DDC electronic damping, quick steering and carbon wheels shod with sticky Metzelers, the Double R feels completely focused and stable on the track. And, second, its brilliant electronics. 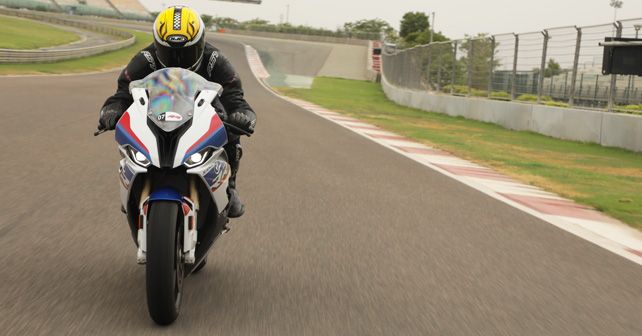 The S 1000 RR brims with rider aids. There are four riding modes – Rain, Road, Dynamic and Race offered as standard. Plus, there’s an optional Pro Mode. In this, you can configure the throttle response, wheelie control, traction control, engine braking and ABS as per your wish using three sub-modes – Race Pro 1, 2, and 3. You can play with the settings through the menu option on a crisp and colourful 6.5-inch TFT display.

We had limited time to fiddle with these settings (only 8 laps). When I began, the bike was in standard ‘Race’ mode, and you can’t switch to Pro mode on the fly. Anyway, even in Race mode, the electronics made sure to make me feel what, perhaps, Superman feels while flying!

On the straights, you can open the taps fully, and the bike won’t even twitch. It just grips and darts ahead like there’s no tomorrow. Similarly, on corner exits, you can open the throttle like an amateur, but instead of being launched into orbit, you exit corners glued to the tarmac as if you’re the next big thing in WSBK. Make no mistake, though, it doesn’t sap any of the fun in the process. It offers thrills aplenty. The electronics never feel overbearing. In fact, they make the RR one of the most forgiving big bikes out there.

Could be better?
While the S 1000 RR completely blew my mind with its performance and agility, there were a couple of things that could have been slightly better. The four-piston Hayes front brake, with twin 320mm discs, now replace the Brembos of the old bike. They work brilliantly for the most part, offering sharp bite and progressive lever feel. But while braking at high speeds – 250km/h or higher – on the back straight, I could sense there was some brake fade after 4 or 5 laps. Of course, once you drop down the gears the engine braking slows you down too, but you do expect the front brakes to inspire more confidence. And it gets even more unnerving given how ferociously the S 1000 RR’s motor devours straights. 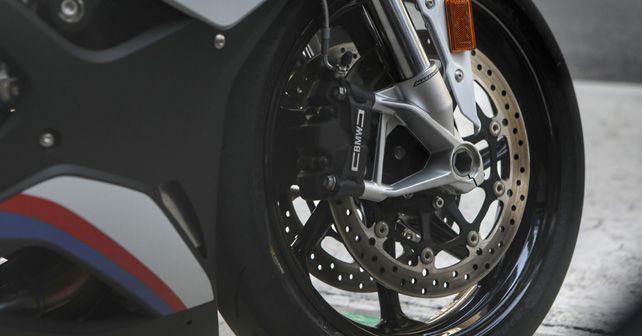 The other thing is its ergonomics. In this new version, the handlebar has been raised slightly, and so too have the foot-pegs, which means that you feel like you’re at top of the bike rather than in it. Of course, it’s very racy, but not as aggressive as the Panigale V4. And that’s both good and bad in different ways.

The good thing is that it’s roomier and comfortable, meaning on the road you’ll be able to clock more miles without busting your back or having numb wrists. On the track though, it takes a little while to adjust and get the body positioning right during fast switchbacks because the S 1000 RR isn’t carved to be an out-and-out racing machine. And because of this, the front-end probably doesn’t feel as telepathic as the Panigale V4’s.

On the flip side, because of its comfy settings, the S 1000 RR is less physical on the track as well, so you’d probably end up clocking more laps. And I felt like I would have become more confident and comfortable hanging off this bike with more track time.

Verdict
Even though I have some minor complaints, I know I’d pick the S 1000 RR in a heartbeat if I had that kind of money in my bank account. It’s stonking fast and unbelievably exciting! At the same time, I can’t, for the life of me, come to a concrete conclusion here. You see, this is the golden age for bikers. And irrespective of the litre-class bike you pick, most of us will never be able to extract everything from these bikes in terms of performance – be it out on the road or on a racetrack. In the end, it boils down to your personal preference because you can’t go wrong with any of these machines. Think of the litre-class segment as the Marvel Universe, and simply pick your favourite superhero depending on whose style you like the most. And if you need help, all I can tell you is that the S 1000 RR is the Iron Man in this analogy. It’s badass, tech-laden and shoots forward as if it’s powered by rocket thrusters!

X-Factor: Badass, tech-laden and goes like as if it's got rocket thrusters - the Iron Man of the superbike world! 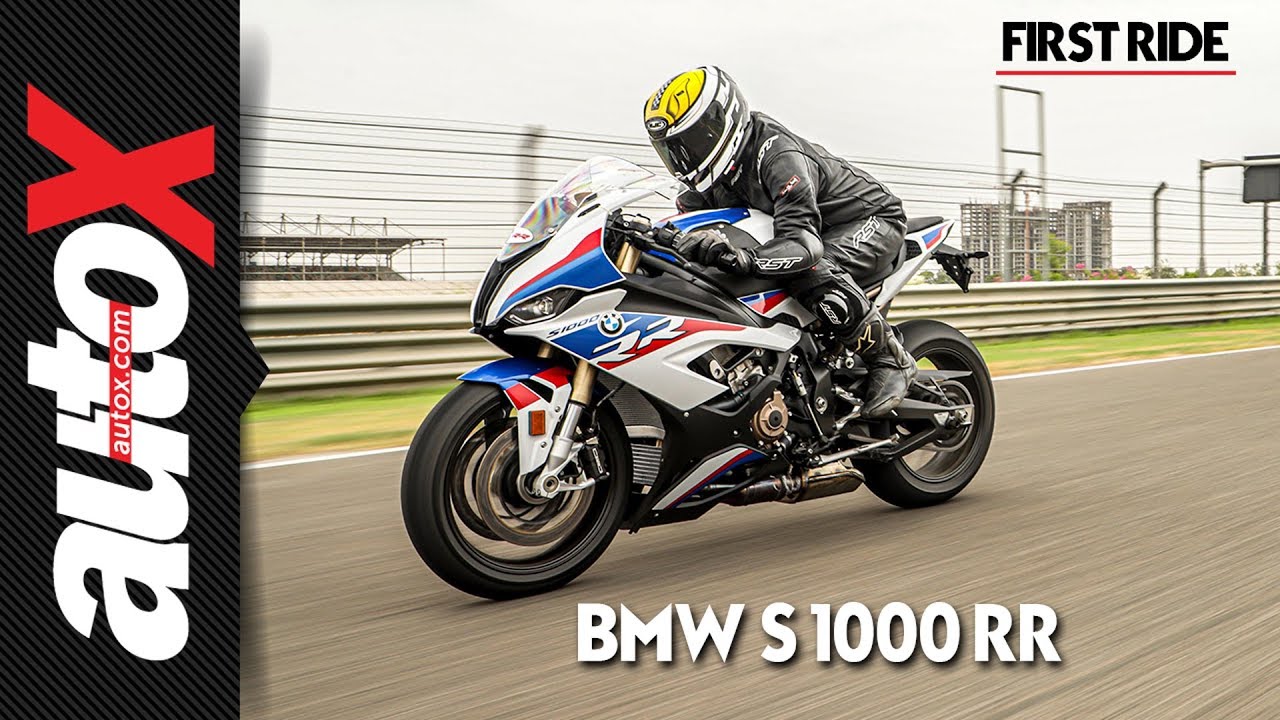