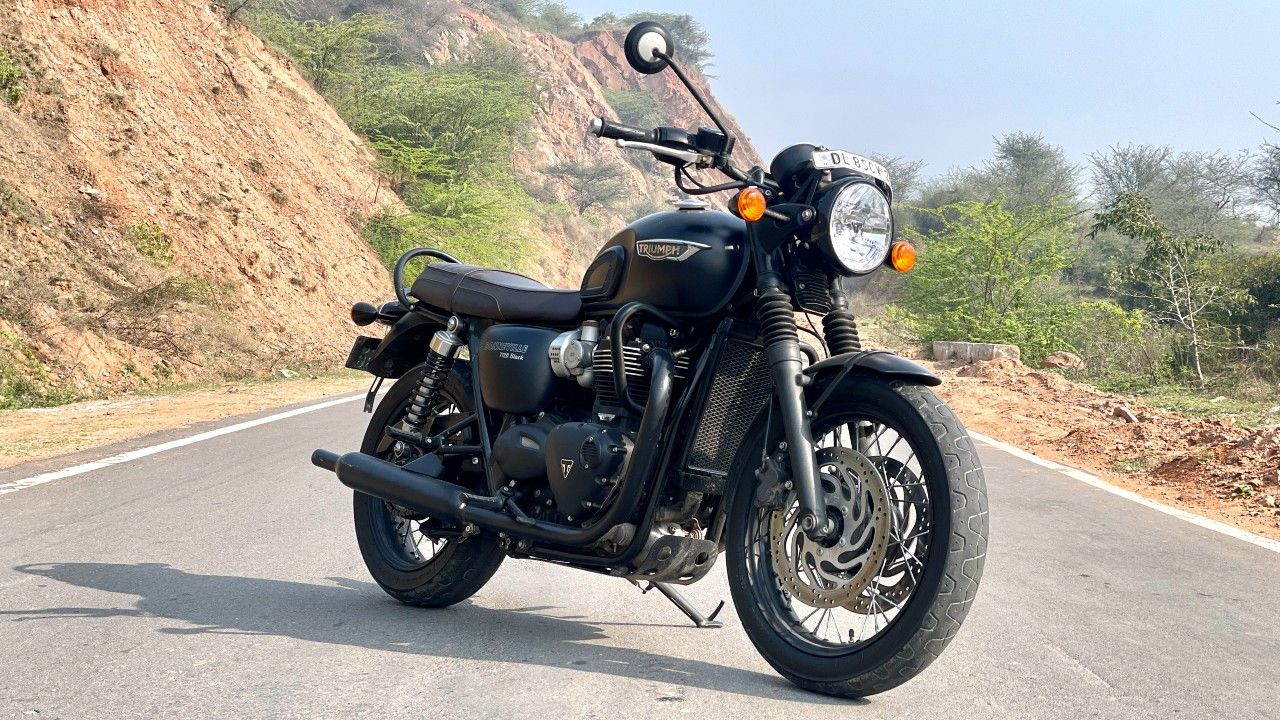 The T120 Black sits between the T100 and the Speedmaster in Triumph's Bonneville range.

Ah, classic motorcycles! They are easy to ride, easy on the eye, and usually easy on the pocket too. Okay, at ₹10.99 lakh for the T120, the full-fat Bonneville doesn’t come cheap, but you do get a lot of bang for your buck. Let’s kit up, take a ride, and find out exactly what makes this Bonnie so good and if there are bits that are not so good. 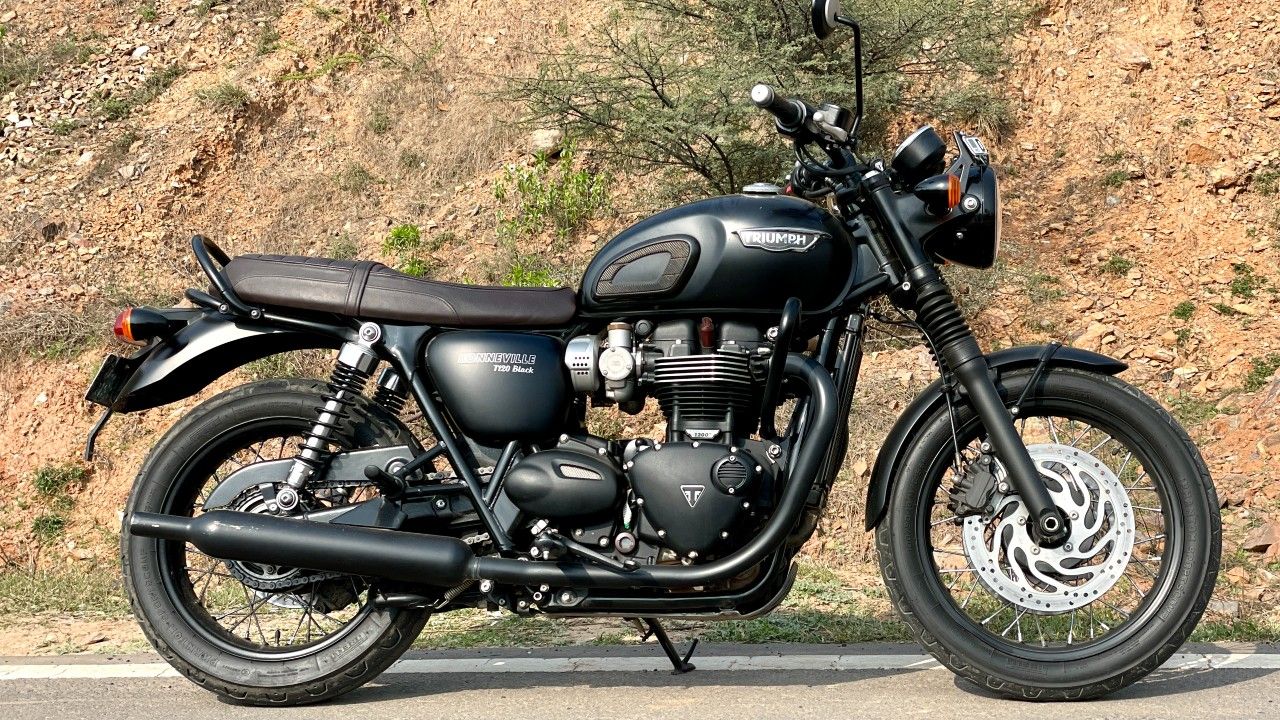 The Bonneville T120 isn’t a bike that grabs attention – not from afar, at least – especially not in this black variant, which gets a matte black treatment for all the chrome bits seen on the regular T120, including the exhaust, engine casing, and other oily bits. 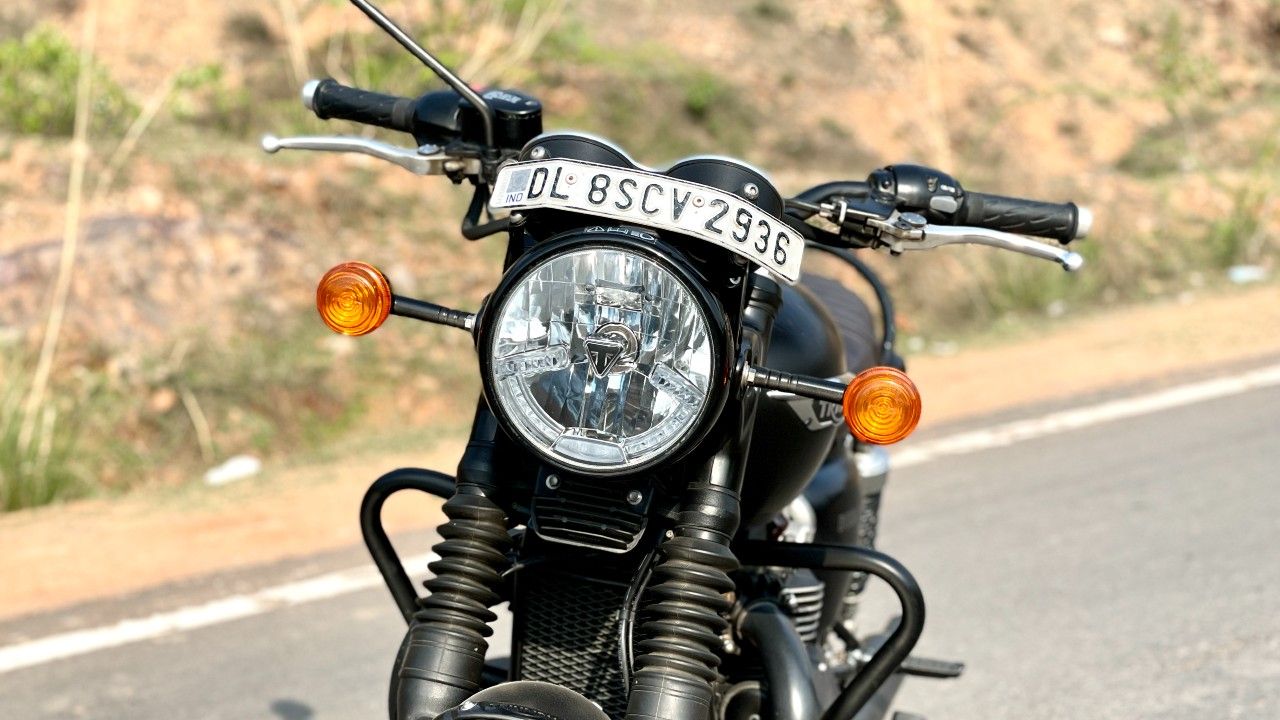 Walk up to it, and you’ll see that while it might not be an attention seeker, it does look good. The lines are clean and fuss-free. The round headlamp, wide handlebars, straight seat, twin rear shocks, and twin peashooter exhausts, all add up to make the T120 look like a ’60s racer. Get even closer, and you will realise the lack of shabby welds and unsightly screws further add to its premium appeal.

Swing your leg around the T120’s brown leather seat, and you’ll find yourself in a rather comfortable place. Much like other classics, the riding position is upright and relaxed. The seat is soft, and the side stand doesn’t take more than a nudge to retract or deploy. That said, at 236kgs, the T120 is a heavy motorcycle. It also has a top-heaviness, which hampers its low-speed manoeuvrability. 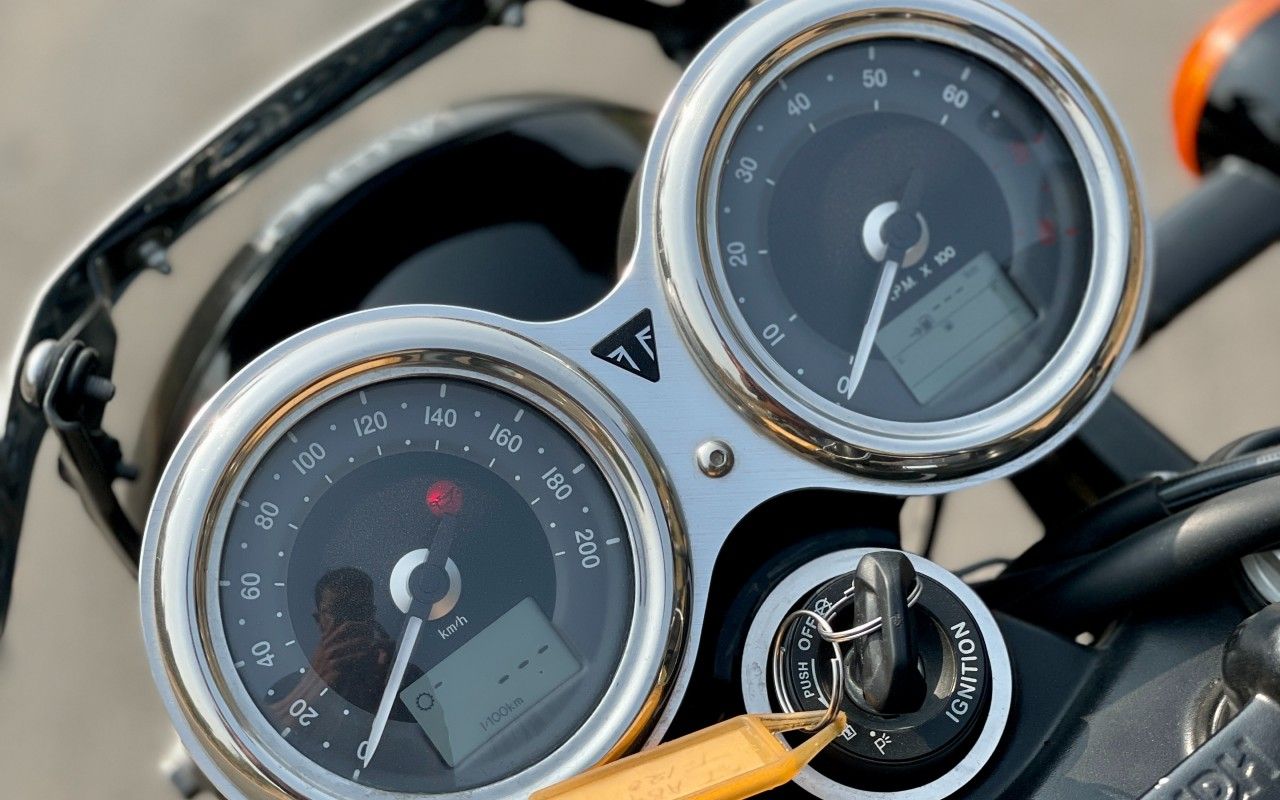 Before setting off on a ride, you can take a moment to appreciate the quality of the switchgear and the grips, which are heated, by the way. It features an analogue twin-pod instrument cluster with bright, legible numbers and a small LCD display with a gear indicator, range, and trip information. Plus. it also shows your riding mode. Triumph could’ve gone all-digital here, but I feel the analogue dials suit the Bonnie more.

As soon as you start her up, you'd feel that the T120 has a sense of occasion about it. The rumble from the 1200cc parallel-twin is sweet enough to cause panic to a diabetic, and it's very smooth. Vibrations only creep in at the very top of the rev range, but thankfully you never really need to hit the limiter. There’s 78.9bhp available at 6,500rpm, which is right at the redline, but the monstrous 105Nm comes in at just 3,500rpm. These figures are more than enough to hurl you forward. The Bonneville might look like an old relic, and it might weigh as much as a small elephant, but my god, it can move! 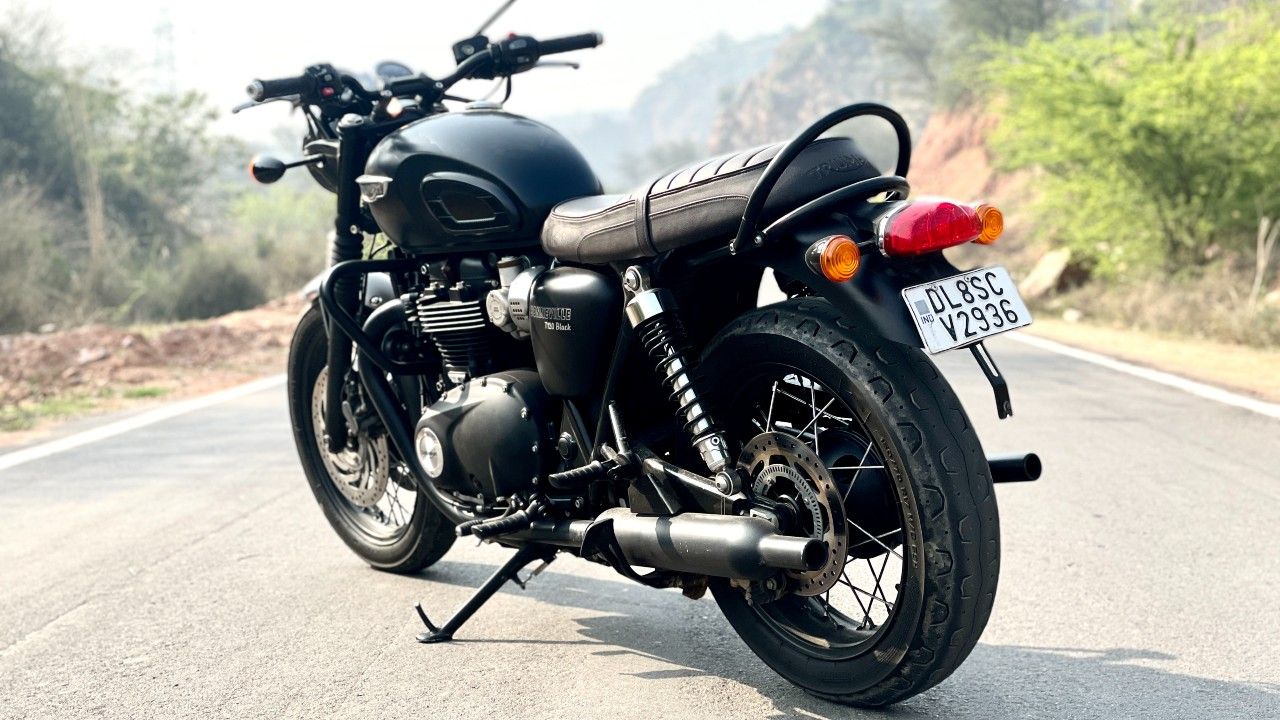 The climb, nay leap, from 60 to 120km/h is almost addictive. The Bonnie picks up speed with immediacy, surging without any lag, and only the speed limit stop the speedo needle from going horizontal. It can cruise at highway speeds all day long and probably carry on through the night without breaking a sweat, although the wind blast may tire you out.

Wind back the pace a little, shift up a couple of gears, and the 1,200cc motor just purrs along. Oodles of low-end torque mean you don’t need to shift down to overtake. But when you do, you’ll find the six-speed gearbox to be a bit clunky. It also seems to find neutral a little too often when toggling between the first two gears – it isn’t too bad though. 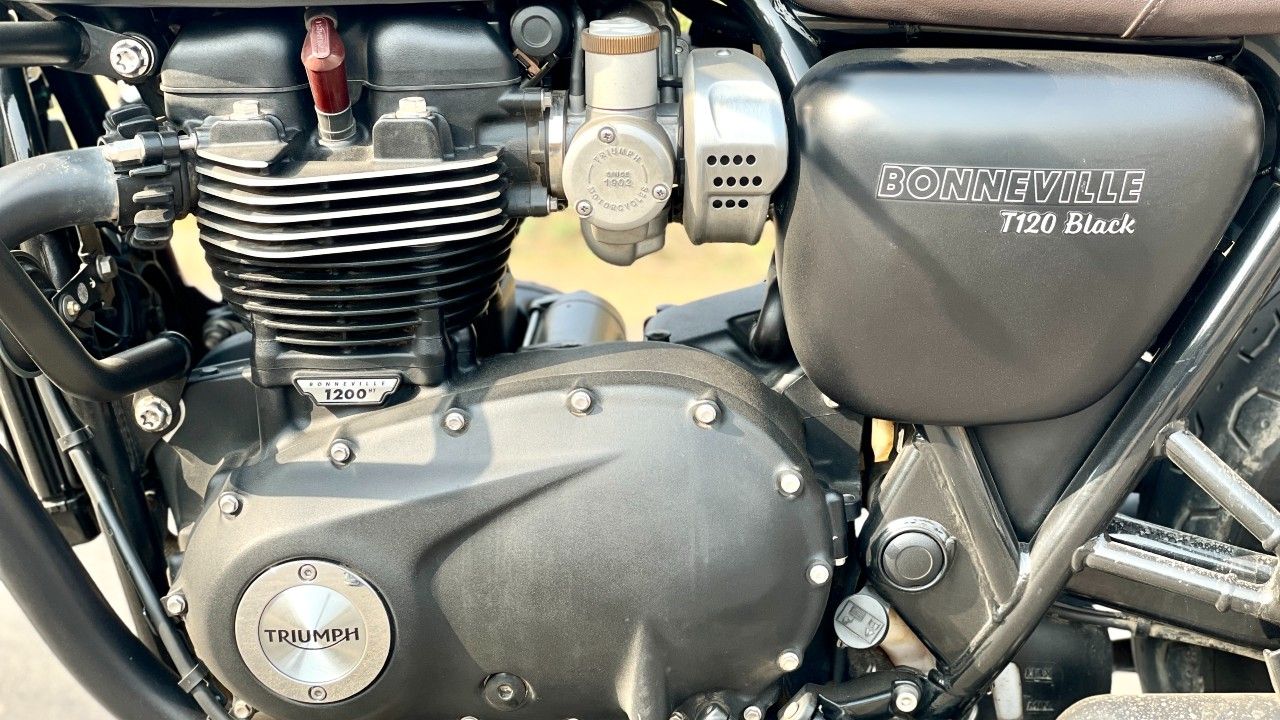 In terms of handling, the Bonneville is sure-footed, but it isn’t light on the feet. You can feel all 236kgs as you tip it around a bend and when you pull it back up on the exit. The Bonneville will keep up with a spirited hustle through the twisties, but it is best enjoyed at eight-tenths. It gives you a chance to appreciate that lovely soundtrack too, as you gun it from one corner to the next.

For the 2022 model year, Triumph has added cruise control to the T120, along with switchable traction control and better brakes. The test bike though isn't an MY2022 model and misses out on these. It does still get two riding modes – Rain and Road. While neither of them alters engine outputs, the former keeps the traction control and ABS on high alert while dulling down the throttle response. 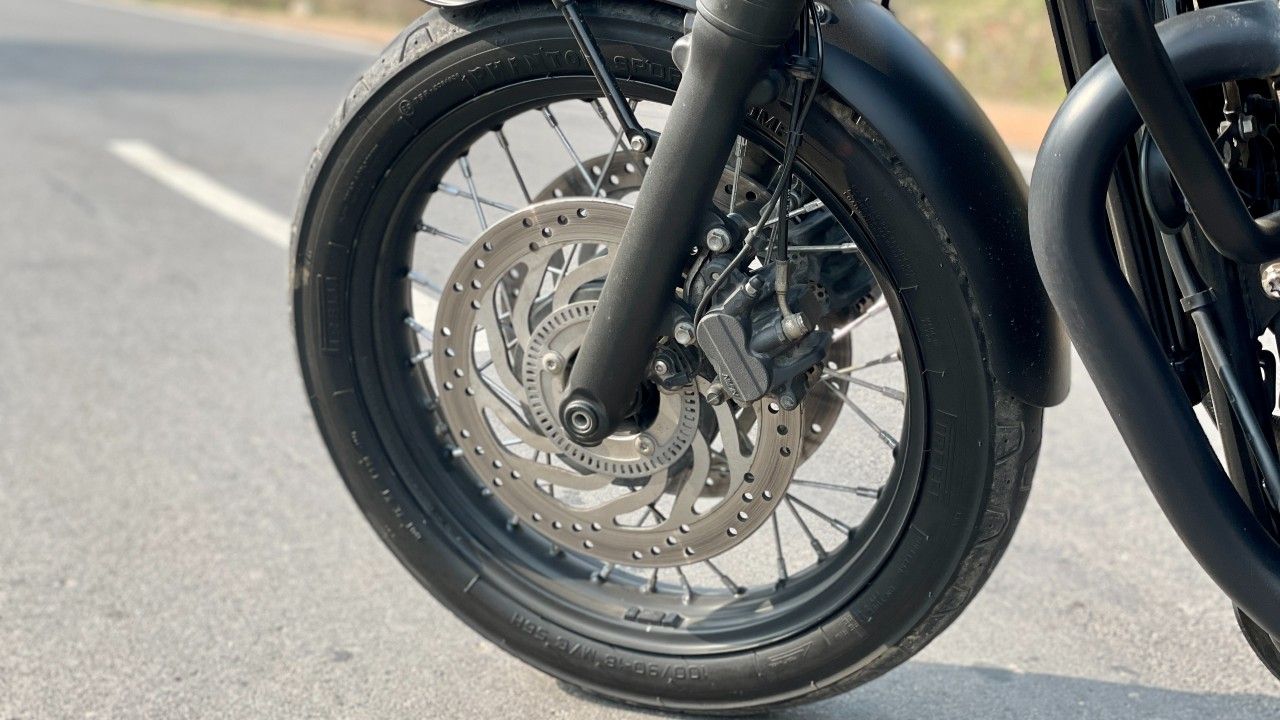 The new Bonneville T120 also gets lighter alloys and an improved braking system, courtesy of twin 320mm discs up front, squeezed by Brembo two-piston floating callipers, and a single 255mm disc at the rear, with a Nissin two-piston floating calliper. I can only hope that the updated Bonnie has a better braking system than the one on our test bike, which just isn't good enough. Apart from this, there are a few other niggles on the big Bonnie.

Our test bike exhibited alarming levels of wobbling at speeds above 60km/h, which hampered the ‘cruising’ part of this test a little. The switchgear, though well put together, is a bit annoying, especially the indicator toggle. It’s a little sticky, and there's no centre press-action to turn them off, so you inadvertently switch on the other side’s blinkers while trying to switch the indicator off. It's not the end of the world, but even the most basic two-wheelers have the indicator switches figured out by now. The Bonneville T120 also heats up at low speeds, but it isn’t too uncomfortable. On a hot summer day or in a terrible traffic jam, it may be discomforting. The Bonneville is also thirsty at low speed and idle, which is understandable since it is a 1200cc motorcycle. That said, it is quite frugal on the highway, returning over 30km/l at 80km/h in sixth gear. 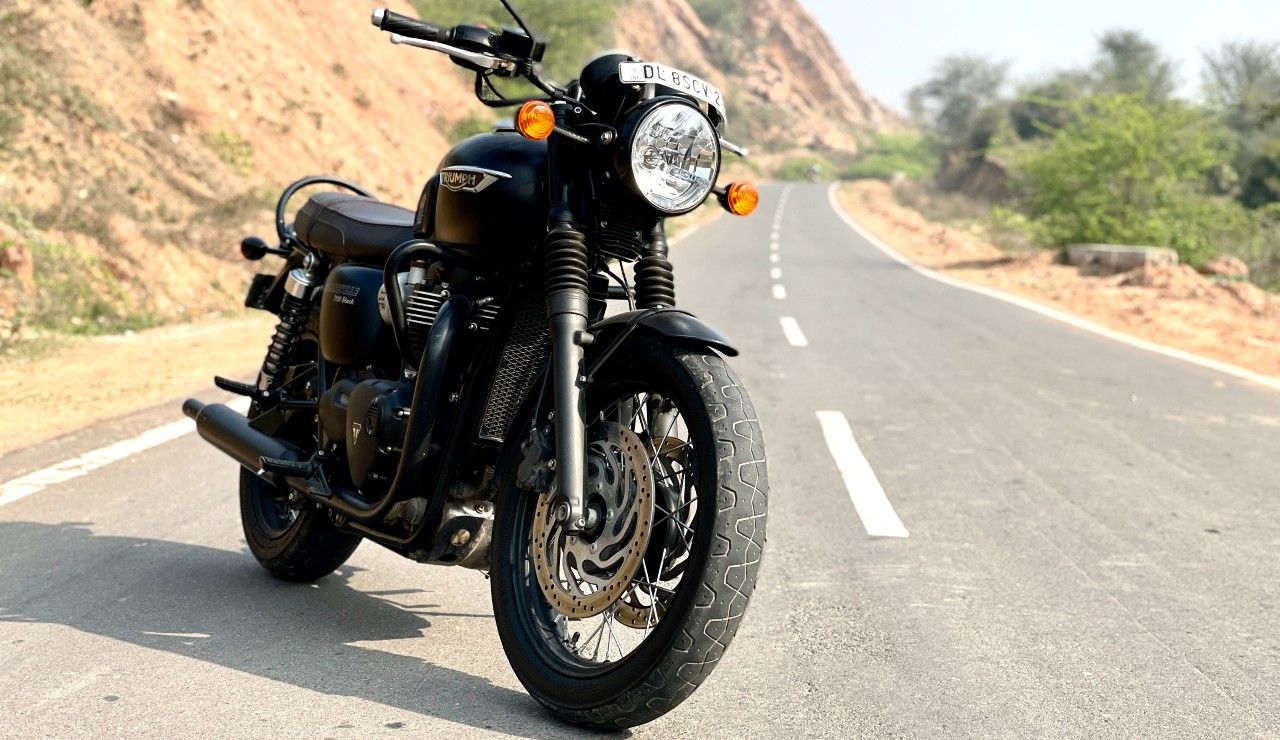 Overall, the Bonneville T120 is a great motorcycle. It can go long distances, accompany you through the city, and make you feel special on that Sunday morning ride. The easy riding position also makes it accessible to beginners, and shorter riders will be able to find the ground fairly easily too. On the other hand, mature riders will appreciate the fuss-free design, refinement, and great build quality.

The Bonneville T120 doesn’t turn heads, but its strong acceleration, brilliant exhaust note, and heaps of torque will keep you more than entertained every time you ride. The 2022 model year motorcycle should also be a touch lighter and better kitted out.

X-Factor: The T120 Black is fast, versatile, easy-going, and ideal for mature riders looking for a comfortable cruiser.