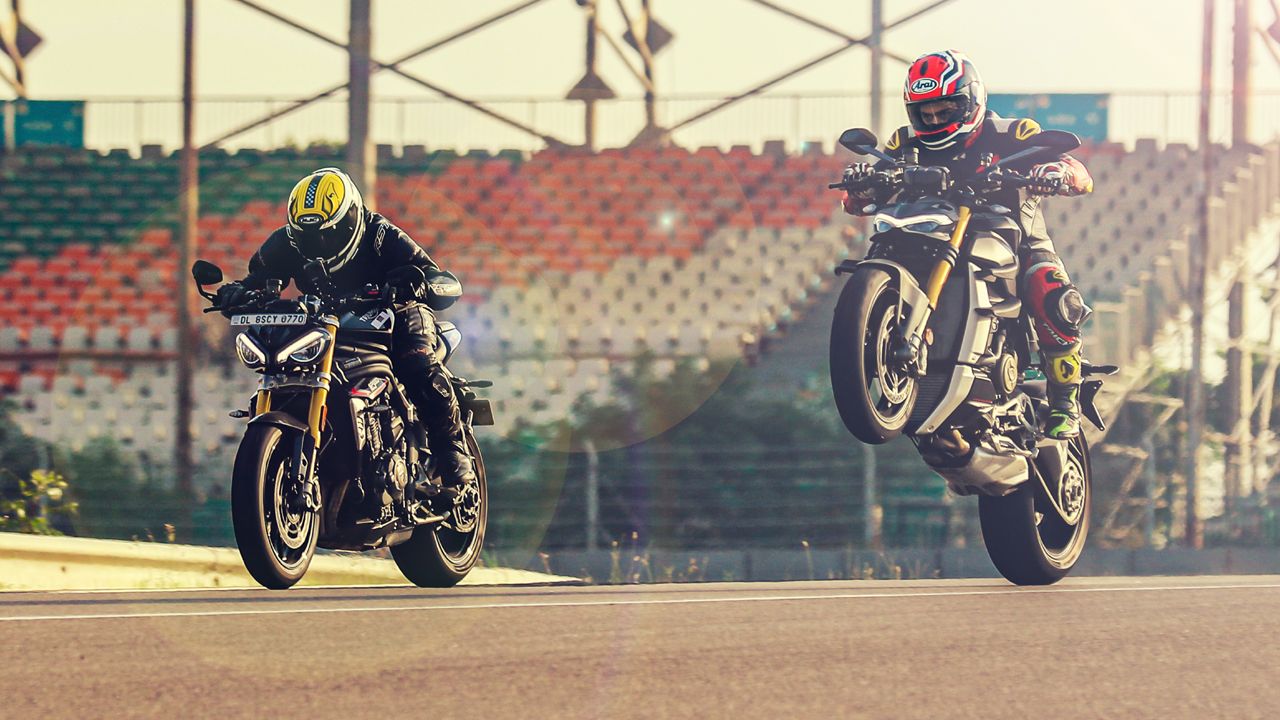 Two of the fiercest street brawlers of the present day – the Streetfighter V4 and Speed Triple 1200 RS – go toe-to-toe at the BIC!

If 200+ bhp superbikes are silly, then new-age hyper nakeds are borderline baffling. You see, litre-class superbikes can at least be pushed to their limits at a racetrack, but I can’t for the life of me think of a street or a public road where you can exploit the full performance of a modern-day hyper naked.

Turns out, I am a minority here. Naked bikes today are packed with such unfathomable amounts of firepower, tech, and performance that motorcyclists are simply lapping them up over their fully-faired versions around the globe. A possible explanation for this is that naked motorcycles are relatively more practical and less serious to live with than their fully-faired brethren. And, at the same time, a hyper naked can be as rewarding as a superbike on the track.

Now, this was exactly the case when we hit the Buddh International Circuit with the all-new Ducati Streetfighter V4 S and Triumph Speed Triple 1200 RS. While the Streetfighter is a naked version of the mental Panigale V4, the Speed Triple 1200 RS is the most hardcore version of Triumph’s big brute to date. They share similar tech, cycle parts, and offer mind-numbing performance, but the way they deliver thrills, they couldn’t be more different! The question is, which one is more exciting and better suited for a track day?

Before we get on with the actual test, let’s get some facts and figures out of the way. The Streetfighter V4 features the same 1,103cc Stradale V4 engine as the Panigale V4, and it develops 205bhp and 123Nm of torque. The figures are slightly lower than the Panigale, as the engine here is tuned for better low- and mid-range performance. In comparison, the Triumph features a 1,160cc inline three-cylinder engine, which churns out 178bhp and 125Nm. Both bikes are equipped with a six-speed gearbox, featuring an up-and-down quick-shifter.

The Streetfighter’s aluminium front frame is derived from the Panigale. The V4 S that we have on test here gets semi-active and fully-adjustable Ohlins electronic suspension on both wheels. The Speed Triple has a similar aluminium twin-spar frame, and it too gets fully-adjustable Ohlins suspension, albeit without electronic adjustability. Both the motorcycles have nearly identical weights (200 kilos, approx.), meaning that the Streetfighter has a better power-to-weight ratio.

Now, you’d imagine the Streetfighter V4 S would absolutely cream the Speed Triple RS on the back and main straight of the BIC. However, that wasn’t the case because, for this face-off, we used the same 2.1-km short loop of the BIC that we use for our annual track test. It simply means that neither of the straights was part of the test – the battle was to be fought on the more technical section of the track, which includes quick direction changes, hard braking spots, and flowing corners. 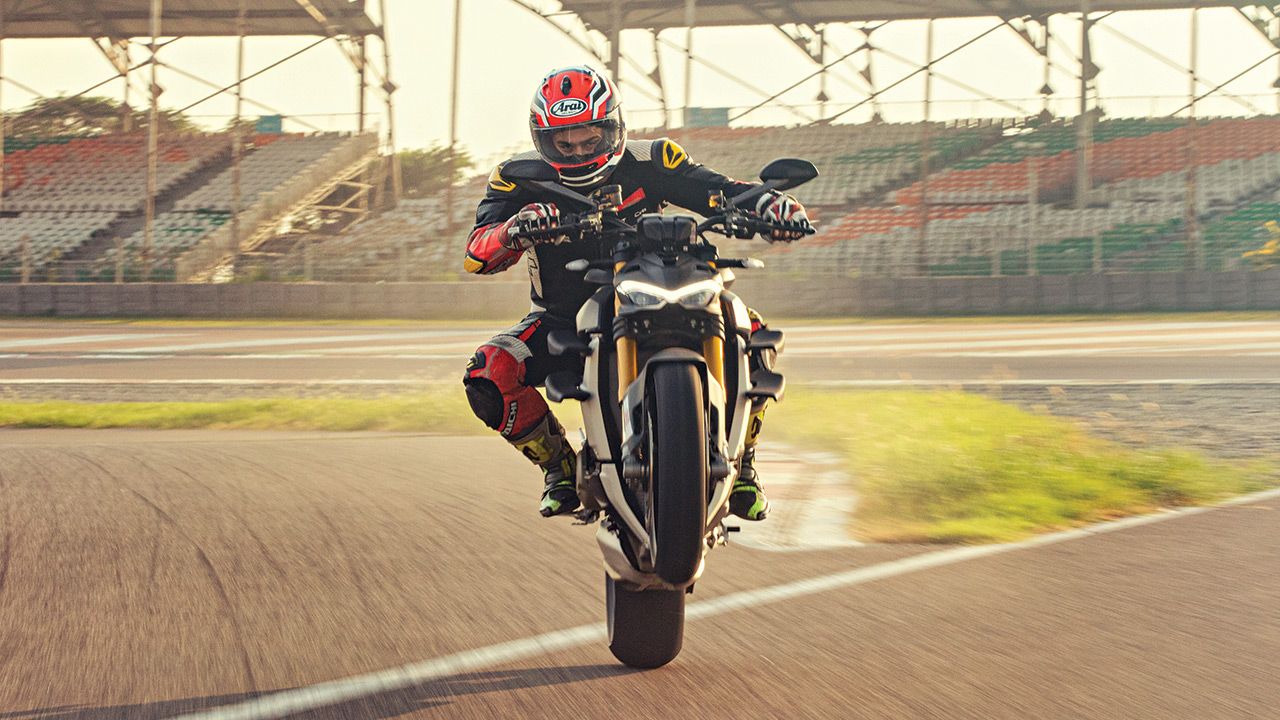 As for the lap times, I didn’t let my mediocre riding skills come in the way, which is why we left it to a professional rider, which in this case is our friend and ace superbike racer, Simran King. However, just to see where my lap times stand vis-à-vis Simran’s on these bikes and to add an intermediate rider’s perspective, I timed a few of my laps, too.

Despite the fact that we skipped the main and the back straight for this test, the Streetfighter had a clear edge over the Speed Triple in terms of outright acceleration on the twisty sections of the circuit. On corner exits, the Ducati accelerates like a bolt of lightning – it’s raw, vicious, and outright terrifying. But this happens when you have no idea about what you’re doing – something that was the case with me during my first two sessions on the bike, as I was still figuring out its behaviour while also trying to sniff the fastest line to clip apexes. But once things got registered in my brain and the levels of adrenaline receded a bit, the Streetfighter V4 was an absolute weapon!

The Speed Triple, on the other hand, is not half as naughty as the Streetfighter. Instead, you can call it your close confidante of sorts, for it allows you to be clumsy. It won’t embarrass you. In fact, it would do everything it can to mask your shortcomings. The moment you hop on to the Speed Triple, especially after the Streetfighter, life feels easy and relaxed. 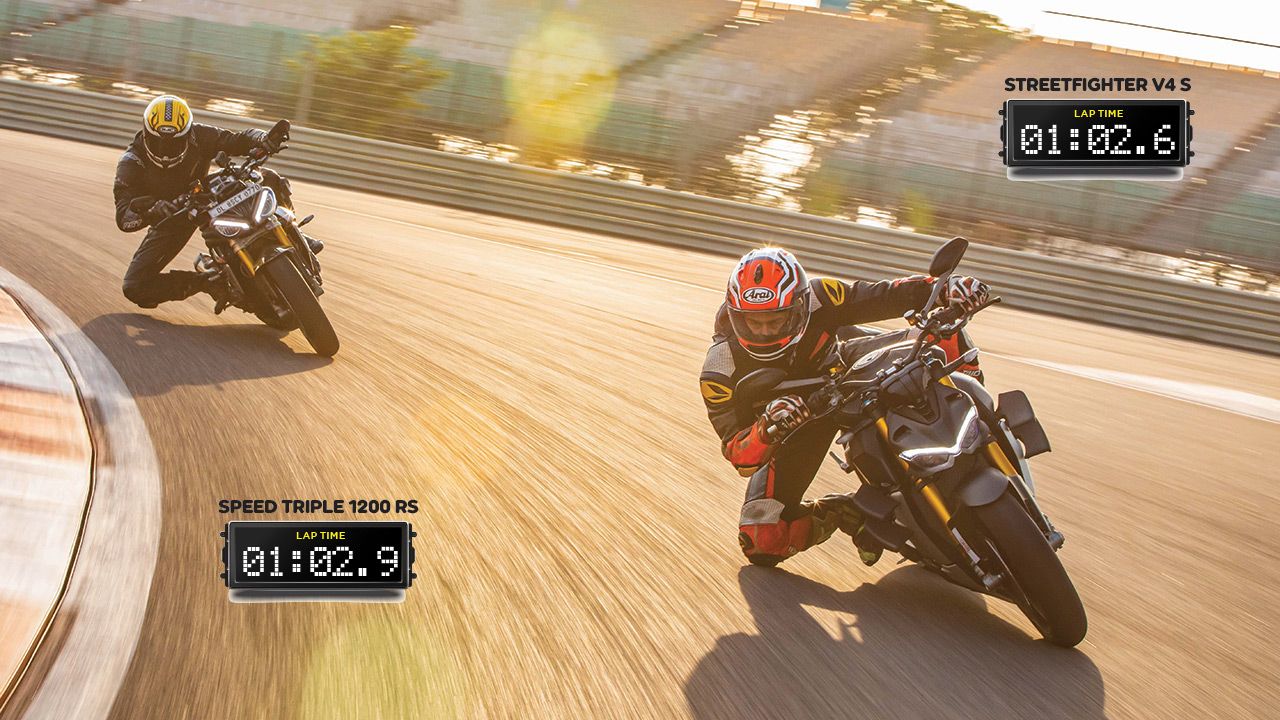 The Speed Triple’s throttle response is progressive and crisp, and the inline-three motor delivers performance in a predictable manner. Compared to the V4’s sudden burst of acceleration, the Speed has a very linear progression. You see, the Ducati slaps you in the face with a torrent of torque when you whack the throttle open; the Speed, however, funnels the power down in a measured manner regardless of how hard you wring the throttle. Of course, that’s not to say that the Speed is slow or dull – in fact, it’s actually quite bonkers! But all of its madness is served right at the top of the rev-range, whereas the Ducati delivers the goods right from the word go. Put simply, the Ducati smashes your senses like a shot of Jägerbomb, while the Triumph is more of a glass of Cabernet – it hits you late, but it hits you just as hard if not more.

Sometimes, though, the delayed nature of the Speed Triple RS’s motor can be a bit of a concern, especially when you’re a racer like Simran who lives for lap times. According to him, the flat-spot at low revs is the biggest flaw of the Speed’s triple engine. Something that isn’t the case with the Ducati. In fact, the Ducati is the polar opposite – it’s a point-and-squirt machine of sorts.

The Speed Triple RS’ weak bottom end, plus tall gearing, is also something that bugged me while riding it on public roads last month – it’s a pain in the bottom to ride the Triumph slow or at crawling city speeds. Even though I haven’t ridden the Streetfighter V4 on the streets as yet, I’m willing to bet that it’ll be better in this regard, given its fierce and more responsive power delivery.

Although the big Triple’s engine isn’t as responsive or heady as the V4’s, there’s not a lot to choose between the two in terms of lap times. The difference between the two motorcycles was a mere 0.3 seconds! 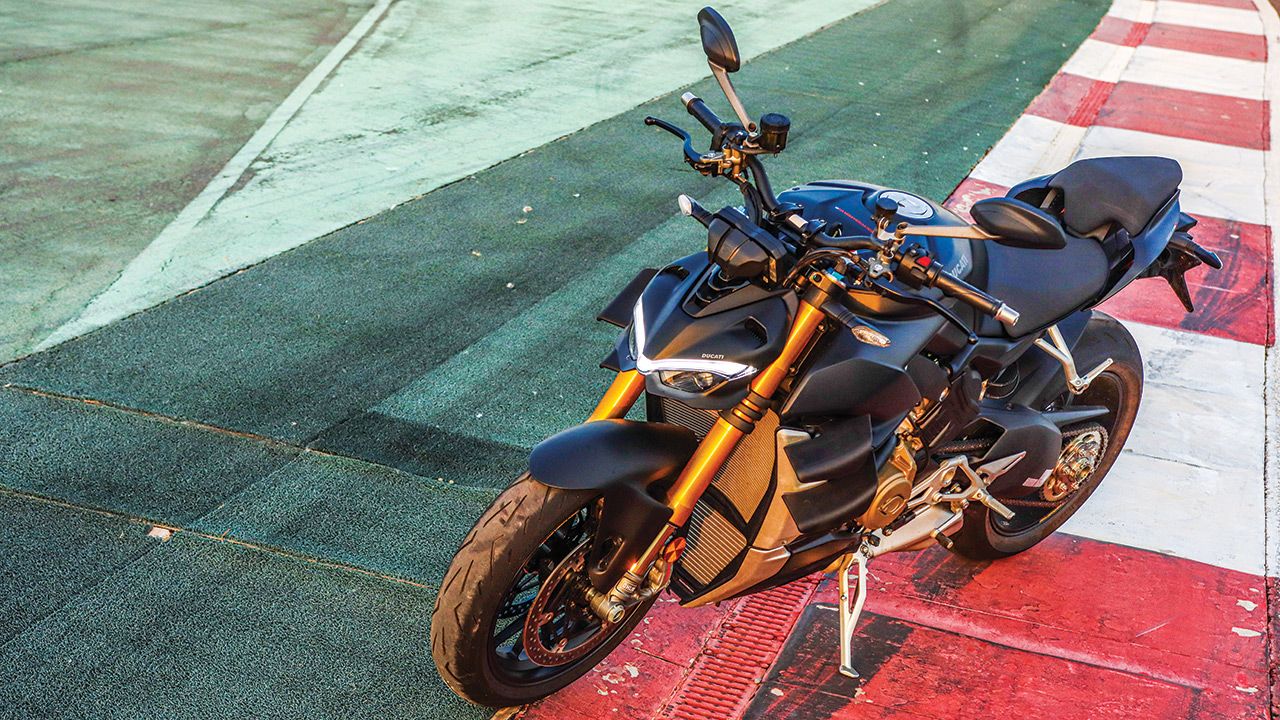 The Ducati is a bit of a beast, and you’ve to be inch-perfect with your inputs – braking, turning, throttle control, everything has to be in perfect sync. If you don’t get everything right, it can be unforgiving – in terms of lap times, that is. On the other hand, the Triumph flows around effortlessly, as it’s easier to flick side-to-side. Make no mistake, the Ducati isn’t a lousy handler – it’s razor-sharp – but it needs professional hands. The Triumph makes you feel more at home, even if you’re riding it for the first time. This was quite evident after I lapped both these motorcycles – I was quicker on the Speed Triple by a whole second!

According to Simran, the Triumph has better mid-corner stability, albeit it’s the Ducati that leans deep and hard. But Simran definitely believed the Speed was nimbler than the Street. If you ask me, the Triumph’s ergonomics was also a factor here. Its riding position is more street-focused – you sit on top of the bike, and thanks to its taller and wider bars, you get more leverage. The Ducati, meanwhile, feels more track-focused – you sit in the bike and the riding position is aggressive.

Both the bikes are equipped with Brembo Stylema monobloc callipers. While the Ducati has bigger discs at the front, the brakes on the Triumph offered more feedback and consistent bite, session after session. Not to mention, the Triumph’s Metzeler Racetec RR K3 rubber also seemed to offer slightly better grip and more feedback than the Pirelli Diablo Rosso 2’s of the Streetfighter. 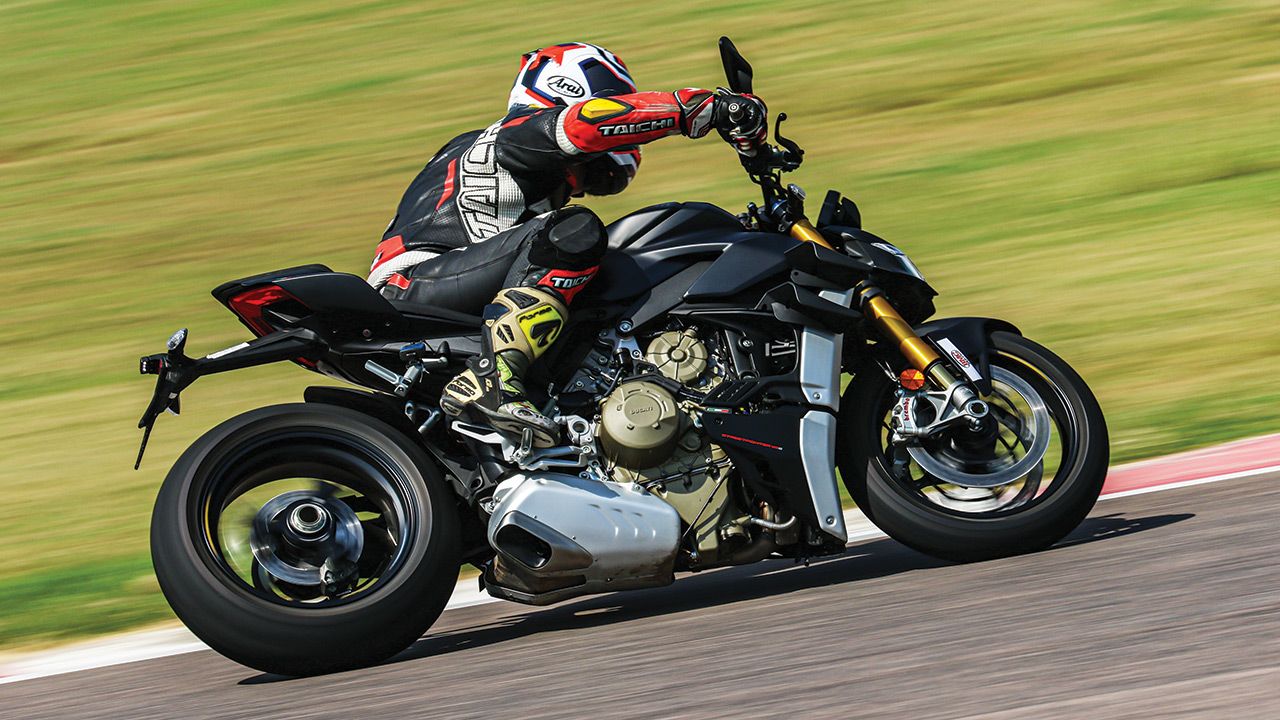 As for the exhaust note, well, the Triumph produces a deep and raspy inline shriek along with a sweet induction noise as the revs climb. The Streetfighter, on the other hand, produces loud, violent guttural noises right from the word go. The Ducati, as you’d expect, is more theatrical in that sense.

It was difficult to pick a winner between these two, for they were very closely matched in every department. Having said that, I must add that the Speed Triple RS comes across as a more rounded package – it’s less intimidating and as fast as the Streetfighter V4. Plus, it’s more affordable.

The Streetfighter, though, is more than a motorcycle. It tickles those parts of your brain where the Speed Triple can’t even reach. It’s brutal, and it’s difficult to master, and it blows your mind every time you hop on it. It’s a motorcycle you can’t get enough of. To give you an example, I did a couple of fast laps on the Speed Triple RS, and my lap times were more or less consistent, and eventually, I stopped searching for more. In Simran’s words, it’s easy to ‘dominate’ the Speed. And I agree.

This, however, is never the case with the Streetfighter V4. You always have the feeling that the Ducati’s challenging your guts in a teasy way. That makes you want to squeeze more out of it, which makes you keep coming back. In addition to that, there are so many electronics, so many settings, and so much to explore that it feels something like Pandora’s box – every time you are on the track, you find something new. Even Simran thought the same, and he was almost certain that he could have gone even faster if he had more time on his hands to try out different settings and various permutations and combinations on offer.

The Ducati has more layers to unravel and, therefore, is more challenging. In short, the Streetfighter is the Call of Duty of hyper nakeds, whereas the Speed Triple RS is more like PUBG. Ultimately, you’ve got to decide how you like to take your shots...

X-Factor:  Badass, brutal and absolutely bonkers – the Streetfighter V4 is a riot!

X-Factor:  A race-bike for the road – it’s nimble, unbelievably friendly, and deceptively quick.