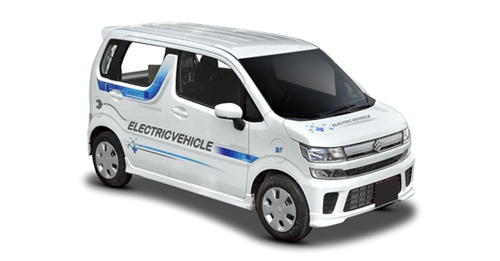 Maruti Suzuki's WagonR has been one of India's favourite small family car, right since its introduction in our market in 1999 – the primary reason why the brand is keen on ushering in an electric version for the Indian market. Towards the end of last year, Maruti Suzuki had showcased an electric prototype vehicle at the MOVE Summit in New Delhi. Dubbed the 'EV' for the moment, the design looks similar to that of the model sold in Japan.

It doesn't look anything like the current, new petrol-engined WagonR, but it's rather nice to have a model on the market that has its own distinct identity. From up-front, you'll notice the split radiator grille and headlamps. The front bumper also sports a huge grille, despite there being no engine in the front. That stubby bonnet looks quite cool as well. It also boasts of a B-pillar that divides the car into two sections, giving one the impression of sliding doors for the rear occupants. Look hard, and you will see that the ORVMs are now mounted on the doors, not the A-pillar. And t The tail lamps are placed just above the rear bumper. Expect the cabin to have the typical fit-and-finish of a Maruti, along with the latest touchscreen and infotainment system, featuring Android Auto and Apple CarPlay.

Maruti hasn't revealed specifications of the car, and neither has it been confirmed if the car can be charged via a fast-charge plug-in station, but it will certainly be India's most affordable family electric car, when it goes on sale in April 2020. To ensure the car is reliable and suitable as an EV for the Indian market, Maruti Suzuki is putting 50 of these cars through their paces to find a perfect balance between charging time and travel range.