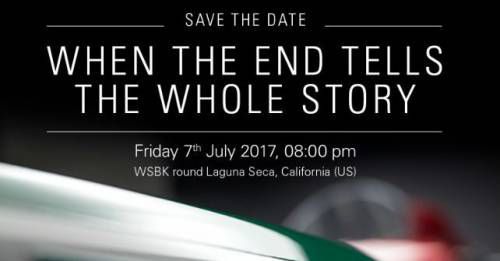 The final edition of the 1299 Panigale will go official on July 7 in California.

Italian superbike maker Ducati had recently confirmed the unveiling of a motorcycle on July 7, 2017. With the invitation mentioning ‘When the end tells the whole story’, it was earlier speculated that the new bike is the final edition of the 1299 Panigale, which is rumoured to be replaced by a V4 motorcycle later this year.

Now, a Ducati dealer in the UK has spilled the beans and confirmed that the teased motorcycle is indeed the last of the 1299 Panigale legacy. The bigger news however, is the specifications and the price of the upcoming Ducati. The final edition Panigale R, will draw power from a twin-cylinder motor capable of generating a staggering 206.5bhp of power and 104.7Nm of torque.

These figures are ridiculously close to Ducati’s limited edition exotic – the 1299 Superleggera, which was priced at £72,000 in the UK, and  upwards of Rs. 1 crore in India (thanks to import duties). However, the claimed price of this upcoming Ducati 1299 Panigale R is £34,995, which makes it much more accessible than the Superleggera.

The upcoming Panigale will have roughly 5.5bhp and 3.3Nm less than the Superleggera, but will weigh a sizeable 12 kg more than the latter. Also, the new motorcycle is expected to sport excusive Italian flag livery.

The Panigale R has been one the most powerful supersport motorcycles to be made by the Italian manufacturer. With a replacement on the cards, Ducati aims to give the Panigale 1299 a solid farewell in the form of this upcoming final edition.

Recently, Ducati had discontinued the big Panigale, along with a few other bikes, in India because of the BS-IV restrictions. While the company confirmed the relaunch schedule of other discontinued bikes in their BS-IV form recently, there was no word on the 1299 Panigale. If the final edition of the motorcycle is Euro-IV complaint in Europe, then it is surely India-bound. Otherwise, we have to wait until the 1299 Panigale gets replaced to see a flagship Ducati supersport motorcycle in India.