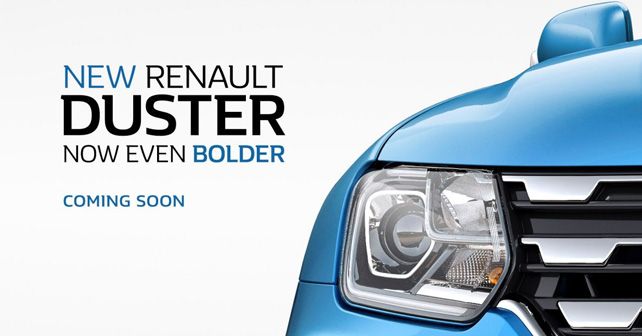 The Renault Duster facelift will come with a couple of cosmetic changes but will remain mechanically identical to the current model.

Renault has started prepping the stage for the launch of the Duster facelift in India. The French automaker has teased the refreshed version on their official website, and it’s expected to go on sale in the country in the coming weeks. Bookings of the new model will commence soon at Renault dealers.

The new Duster is not going to be an all-new model, which means it’ll be underpinned by the same platform as that of the existing model. The changes will be mostly cosmetic – the new version will get a revised front end, featuring a new chrome grille, re-profiled headlamps with projectors and LED DRLs and a new bumper. The side profile will be largely unchanged, but it’ll get new 17-inch alloy wheels on the top-end variants. The rear end will be similar to the current model, featuring the same set of tail-lights and a few minor changes, like black cladding on the tailgate.

Inside, there will be a couple of changes as well. New bits in the cabin will include a new multi-function steering wheel, updated touchscreen infotainment system with Apple CarPlay and Android Auto connectivity and redesigned AC vents. The upholstery will be new as well, and there’ll be aluminium and chrome inserts in the cabin to give it a premium touch.

Engine options are expected to be unchanged, which means it’ll get the same set of 1.5-litre petrol and diesel engines. Albeit, expect the diesel version to be only offered in the 108bhp trim as Renault will discontinue the 85bhp version. The diesel motor will come paired to a six-speed manual or a six-speed AMT, whereas the petrol will be offered with a five-speed manual or a CVT automatic. Front-wheel drive will be standard, and it’s likely that the top-end version will get all-wheel drive as the current model. There’s no news if the diesel engine will be BS6 compliant, which means Renault may be forced to discontinue the diesel version post-2020.

The Renault Duster facelift is expected to be priced between Rs 8 lakh and Rs 13.50 lakh (ex-showroom) – more or less the same as the current model. The competition will include the likes of the Nissan Kicks and Hyundai Creta.