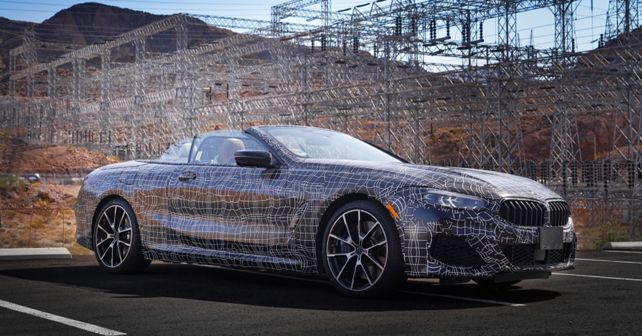 Subsequent to the official unveiling of the 8 Series Coupe, BMW has now released a teaser image of its open top sibling.

Even with the camouflage, it is not hard to see the resemblance the convertible has with its Coupe sibling. Up front, the kidney grille and the bumper seem borrowed from the coupe. The most easily noticeable difference, obviously, the retractable roof. Interestingly, with the roof up, the convertible looks identical to the coupe, especially in the side profile. On the inside, the 8 Series convertible borrows the dashboard from the coupe. The BMW Live Cockpit Professional with two large digital displays with navigation.

BMW hasn't revealed details about the engine that the 8 Series convertible will come with, it is safe to assume that it will be shared with the hard top. The 4.4-litre bi-turbo V8 makes 523bhp and 750Nm in the hard top. Despite having the same motor, the convertible may be heavier and may be marginally slower to reach the 100km/h mark.

BMW 8 Series Coupe: All you need to know