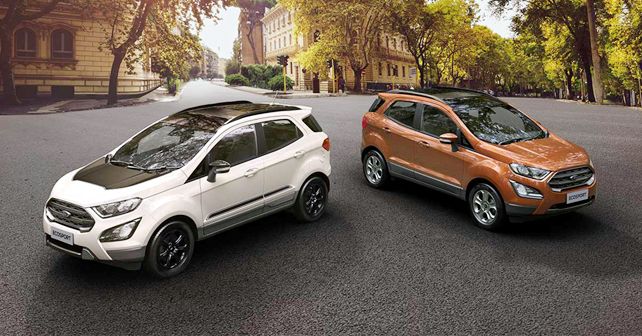 With the BS-VI update, it's the end of the road for the EcoSport's earlier 1.0-litre EcoBoost petrol unit.

Ford has officially entered the arena of BS-VI vehicles in the country by launching the updated version of its compact SUV - the EcoSport. Prices for the 2020 EcoSport start from ₹8.04 lakh for the entry-level petrol variant (Ambiente MT) and ₹8.54 lakh for the entry-level diesel variant - Ambiente MT (ex-showroom, Delhi). In both cases, that's an increase of about ₹13,000 over the BS-IV car's prices. Ford is also offering a 3-Year/1,00,000km warranty on the BS-VI EcoSport.

With the BS-VI update, the EcoSport line-up has ditched the 1.0-litre EcoBoost petrol engine. This means the car is available only with two engine options now - the 1.5-litre three-cylinder petrol (120bhp, 149Nm torque) & the 1.5-litre four-cylinder diesel (99bhp, 215Nm torque). The transmission options remain unchanged - the petrol engine is available with either a 5-speed manual or a 6-speed torque converter automatic gearbox, while the diesel engine only gets the 5-speed manual option.

In terms of features & equipment though, the BS-VI EcoSport does not offer any changes. Like before, the higher variants come equipped with Ford's SYNC 3 infotainment system (with an 8-inch touchscreen) or a 9.0-inch multimedia system in lower variants. The list of features also includes up to 6 airbags, auto HID headlamps (with DRLs), push-button stop/start, etc.

Here's the variant-wise price comparison of the BS-VI Ford EcoSport (all prices are ex-showroom, Delhi):