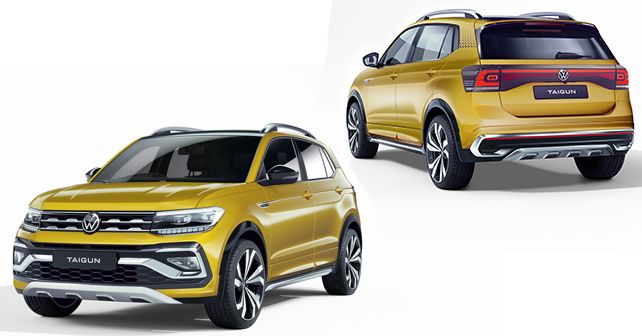 The India-spec Taigun will be based on Volkswagen Group’s heavily localised MQB A0 IN platform. Expected to be launched sometime in 2021, the Taigun will be priced in the Rs 10 – 16 lakh price range.

At the Skoda Auto Volkswagen India Media Night, VW took the wraps off the India-spec Taigun. Based on the MQB A0 IN, the Taigun for India is identical to the China-spec T-Cross. Interestingly, Volkswagen had showcased the Taigun concept at the Auto Expo 2014 and was evaluating its feasibility for the Indian market. That model, however, was a sub-4 metre SUV, and this Taigun is expected to be around 4.2 metres in length, which makes it marginally smaller than the Kia Seltos and the upcoming new Hyundai Creta.

The Taigun is based on Volkswagen Group’s MQB A0 IN platform that has been heavily localised for the Indian market. The near production-ready model that was showcased looks like a scaled-down version of the Tiguan from the front. The wide front gets a heavy dose of chrome on the grille and around the fog lamps. Large front air dam and silver skid plates add to the butch appeal of the car. At the rear, the LED taillamps that are connected by an LED bar give the Taigun a wider stance. Inside, the Taigun gets a large screen for the Virtual Cockpit and another touchscreen unit for the infotainment system, which is compatible with Apple CarPlay and Android Auto.

Keeping in mind that Volkswagen is aiming to increase the localisation up to 95% by 2021, expect the pricing of the Taigun to be competitive – roughly in the Rs 10 – 16 lakh range. This puts it right against the Kia Seltos, Hyundai Creta, and others. The Volkswagen Taigun will make its way to India in the second half of 2021.