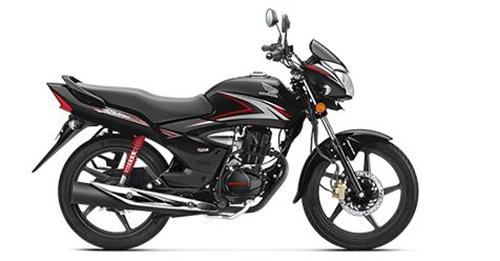 The Honda Shine Mileage is 65 kilometers per litre.

The Honda CB Shine is an affordable 125cc offering from Honda. The CB Shine caters to your average buyer, perhaps to a commuter who does not care about the looks of the motorcycle and expect decent performance and efficiency from the bike. The CB Shine is one of the highest selling bikes in the 125cc segment for the very reason being its terrific price, supremely comfortable seats, and, of course, Honda’s bulletproof reliability.

Honda CB Shine is not something that will make heads turn, but the design is practical and functional. As for its dimensions, the commuter measures 2,046mm in length, 737mm in width and 1,116mm in overall height. The bike has a ground clearance of 162mm and a fuel tank capacity of 10.5-litres. The kerb weight, on the other hand, is a rather light 114kg.

The Honda Shine new model features a 124cc single-cylinder engine, which produces 10.5bhp and 11Nm of torque. The power is sent to the rear wheel via a four-speed manual gearbox. It is, of course, compliant with BS-VI emission standards. Moreover, the commuter is quite efficient too, as the manufacturer says the Honda Shine mileage is 65km/l.

The CB Shine gets its stopping power from 130mm drums as standard on both ends. There’s a front disc brake too, which is present in the higher variants. The bike rides on telescopic forks at the front and hydraulic type suspension at the rear. Moreover, the 18-inch wheels are shod with 80/100-18 section tyre at both ends. As for the chassis, the CB Shine is built around an advanced designed diamond frame.

The Honda CB Shine new model gets analogue speedometer and tachometer dials for the instrument cluster. The headlamp the taillamp both miss out on LEDs. From the safety point of view, the Shine gets CBS (Combined braking system) as standard across the range.

In an order to commemorate the sale of 1 crore units of the Shine, Honda has introduced a special edition of the motorcycle, dubbed the Celebratory Edition, and is offering new graphics and two new....

Honda Shine Price in Near By Cities