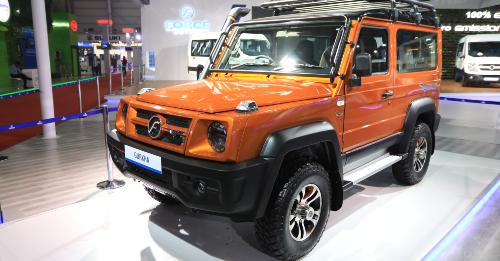 The Force Gurkha has been one of the most impressive off-roading machines in the country in its previous avatar. It was, however, discontinued as soon as BS-VI emission norms came into force in early 2020. But the good news is, Force Motors is expected to bring back the Gurkha very soon, and we’ve already seen two production-ready concepts at the 2020 Auto Expo.

The all-new Gurkha carries forward the boxy design of its predecessor, but it’s the highlights that are all new, case in point the round headlamps with integrated halo-like LED DRLs, bonnet-mounted LED blinkers, a new set of alloy wheels, and more. The changes continue to the interior as well, as the Gurkha now sports a relatively modern dashboard design, plus it also gets an expansive feature list as compared to the older BS-IV model.

Powering the new Gurkha will be the same 2.6-litre and 2.2-litre diesel engines, which will, of course, comply with the stringent BS-VI emission standards. Moreover, it is expected to be based on the same chassis and continue to feature 4x4 capabilities.

Expect the updated Gurkha to be dearer than the now-discontinued BS-IV model by a margin. It will directly compete with the Mahindra Thar when it arrives in the market later this year.