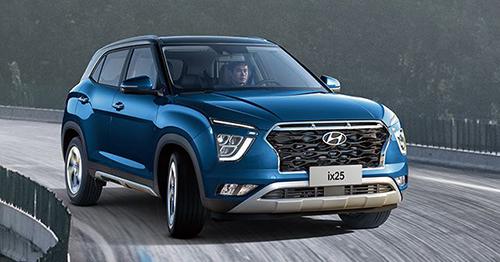 It has been nearly two years since Hyundai has given the Creta an update. Launched in May 2018, the Creta face-lift has started to feel a bit long in the tooth, especially after the introduction of the new Kia Seltos and the MG Hector. Hyundai is now all set to being in the new iteration of the Creta. Based on the ix25 concept that was showcased in China last year, the second-gen Creta will be showcased at the Auto Expo next month and will be launched in March.

In line with Hyundai’s new design language, expect the 2020 Creta to get a larger grille and split headlamps up front – just like the ix25 concept. Along the sides, it will retain the squared-off wheel arches but will get a new set of alloy wheels. Expect the new Creta to come loaded with features like a projector headlamp, panoramic sun roof, cruise control, and Hyundai’s Blue Link technology that we have already seen on the Venue.

The Creta will borrow the same engine options that we have already seen on the Kia Seltos – 1.5-litre petrol and diesel motors, and a 1.4-litre turbo petrol. Expect the Creta to deliver similar output too – the standard petrol should make around 114bhp and 144Nm while the diesel will put out similar power as the petrol and close to 250Nm of torque. The 1.4-litre diesel motor that is currently found on the lower variants of the Creta may not be available in the second-gen model. From the time of launch, the Creta will be available with manual and automatic transmission options.

Expect the 2020 Creta to be priced marginally higher than the current-gen model in the Rs 10-17 lakh range. The Creta will face great competition from its own sibling, the Kia Seltos. It will also continue to compete against the MG Hector and the Tata Harrier.