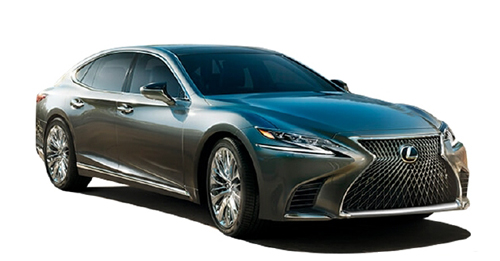 Lexus has been popular around the world, in places like the United States and Japan. With its German and British contenders in the ring, the Japanese 2018 Lexus LS 500h shows no signs of fear, for it comes with unconventional styling, a solidly built structure, numerous gadgets to play with and a beautifully designed and comfortable cabin. The LS 500h is in its fifth-generation form and is more of an evolution of its replacement. It employs a silky-smooth V6 and a pair of electric motors, coupled to a 10-speed automatic transmission.

A glance is all it takes to understand that Lexus is very ambitious about selling snazzy-looking cars. The large, spindle-shaped grille looks striking from the front, flanked by Z-shaped headlamps. There are also huge vents on either side of the bumper. The 20-inch chrome wheels are possibly the coolest ones you will have seen on a car yet. That strong shoulder line gives it a lot of character from the side; so does the one running below it. At the rear too, the Lexus LS 500h new model does not compromise on the styling, despite its overall girth. The half-chrome, half-glass tail lights look sleek, and there's even a bar of chrome running atop the number plate. This is a design that is hard to fault with, no matter what angle it is viewed from.

Opening the door has the car's ride height increase, while the driver's seat too, raises itself. Even the steering position is adjusted the moment you press the start button. The front seats are large and supportive, and allow you to adjust the shoulder and lumbar support. There's ample legroom for occupants at the rear, and the backrest can be reclined by up to 48 degrees. The armrest in the middle consists of various controls for the infotainment and seat adjustments. The cabin is full of angular forms, panels and elements that come together to create a unique atmosphere. There's a lot of intricate detailing that has gone into the making the interior right for the price. Lexus LS’ boot space, at 430 litres, is pretty good too.

The Lexus LS 500h is powered by a 3.5-litre V6 petrol engine and two electric motors that make a combined output of 295bhp and 350Nm of torque, with power being sent to the rear wheels via a 10-speed automatic gearbox. The engine is silky smooth, and delivers strong performance. It manages the 0-100kph sprint in just 5.4 seconds. Even at higher speeds, the LS feels rather relaxed, while the gearbox proves to be very precise. Around corners, the car doesn't feel like it is heavy; instead, it feels planted. In S+ mode, the LS feels is almost ready to take on a racetrack. Even the exhausts sound a bit sporty in this particular mode. That’s the insane performance you get when you sign a cheque for that hefty on-road price. Lexus LS’ ride quality over bad roads is decent, but when you hit the harder stuff, the stiffness can be felt. And the steering is light, but it isn't lacking excitement, and can genuinely have a driver feel satisfied.

The Lexus LS 500h's ARAI-certified fuel efficiency figure is rated at 15.38kmpl for both hybrid variants.

Apart from few styling tweaks and technological updates, the refreshed Lexus LS claims to be quieter inside the cabin. The LS will continue to be offered in a petrol and a petrol-hybrid....

What is the current on-road price of Lexus LS?

Currently, the Lexus LS is priced at Rs. 1.82 Crore for the base Luxury trim.

What is the price of the top variant of Lexus LS?

Which year did Lexus introduce the LS in India?

What are the top competitors of Lexus LS?

The Lexus LS goes up against the Lexus LC 500h and Audi RS7 Sportback in the Indian market.

Lexus LS Price in Nearby Cities