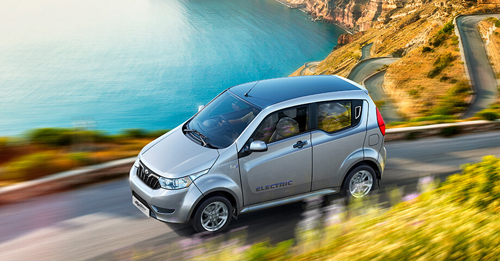 Earlier this year at the Auto Expo 2018, Mahindra unveiled the e2o NXT – the model that will replace the current e2o Plus. Although it was only a concept when we first saw it, the e2o NXT does paint a picture of where Mahindra wants to go with the EV business.

The e2o NXT that was revealed at the Auto Expo 2018 sports Mahindra’s new design language that we have seen on its newer cars. Up front there is the signature Mahindra grille with twin-barrel projector headlamps on either side. The front bumper, although neatly carved out, doesn’t have any openings or major cuts. Much of the profile remains unchanged, including the bulky wheel arches. The concept that was on display at the Auto Expo came fitted with 14-inch diamond cut alloy wheels, but we expect the production version to come with smaller wheels. The biggest change on the back of the e2o is the large piece of grey plastic on the boot lid. There are quite a few noticeable changes in the interior of the car too. The dimensions and the layout of the cabin remain unchanged, but the e2o NXT now gets a touchscreen infotainment system as well as a large instrument screen.

Mahindra hasn’t divulged any details about the e2o NXT’s powertrain options as yet. That being said, the Nashik-based firm will now be based on the company Electric Scalable Modular Architecture. There’s no official confirmation about the launch of the car as yet, but we expect to get more details from Mahindra soon.