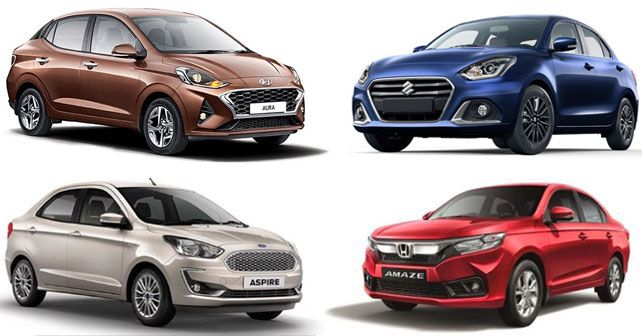 The battle of the compact sedans is on with the recently updated Ford Aspire being the only car in its segment to offer connected car technology. But Hyundai's Aura with a turbocharged petrol engine and some feature highlights isn't to be taken lightly. The Dzire meanwhile no longer has a diesel option, so it is on the backfoot. The Honda Amaze diesel automatic, meanwhile, is the diesel automatic compact sedan of choice with its impressive powertrain. Here's a closer look at all of the strong points that each of these cars brings to the table.

One of the most lucrative segments in the Indian automotive market today is the compact sedan segment. Despite the sub-4 meter length compact car regulations, this is a segment that has achieved great milestones by pushing the boundaries in terms of space, comfort, and style. Gone are the days of the stubby boot, for the Maruti Suzuki Dzire, with its smooth flowing lines, looks fairly attractive. Other cars such as the Ford Aspire too are just as capable. The Honda Amaze may have an abrupt nose and tail, caused by its attempt to maximise space, but it’s only the rear-end design that lets it down. That, in fact, is the case with the Hyundai Aura, which, too, looks fairly contemporary, apart from its rear-end design, which, like the Amaze’s, has an abrupt ending, but its over-styled nature makes it all the worse.

So, it’s now time to see how the new Aura fares against its rivals. Unfortunately, due to the ongoing COVID-19 lockdown, we can’t bring you a full-fledged comparison test, so here’s a look at how these cars fare against each other on paper.

It's no coincidence that all four cars are identical in length. The Dzire, though, with its doors that are curved outwards from the window sills, is the widest car here, and that's something that you can sense in terms of the sheer amount of cabin space that this car offers. And that stubby boot of the Amaze offers some added functionality – it has the largest boot than any of the cars here.

The Aura is the only car here that offers a more sporty 1.0-litre turbocharged petrol engine with segment-leading power and torque figures. And while we are yet to pitch it against its rivals, as things stand, the 1.2 litre K Series engine of the Dzire is a real segment benchmark in terms of not just driveability but also performance, with its free-revving nature. It offers the best real-world fuel efficiency too.

With the upgrade to BS6 powertrains, Maruti Suzuki has dropped the diesel engine option for the Dzire, which is a real shame, for it was a quite a hot seller. What's more, all of its rivals are offered with diesel powertrain options. So, the Dzire is on the backfoot in this department, but Maruti Suzuki is looking to bring back its new 1.5-litre diesel engine in BS6 spec. The Ford 1.5 diesel is the most powerful in its segment and offers great performance too, but its the Amaze that is the most fuel-efficient and comes with the comfort of a rather brilliant CVT automatic option.

As is the case with any new Hyundai, the Aura, too, pushes the limits when it comes to pampering customers with a swanky infotainment screen display, wireless phone charging, etc. The cabin layout and trim quality too deserve praise. The Dzire's cabin looks good, but its build-quality definitely has room for improvement. The Honda's cabin is the least impressive in terms of appeal but makes up for it in terms of space. However, the Ford Aspire, the oldest car here, still has the best build-quality, and it is also the only compact sedan to offer connected car technology via the Ford Pass smartphone app and an in-built SIM card.

When it comes to prices, all of these cars are roughly in the same ballpark. The Amaze diesel automatic, as expected, is the most expensive car here, followed by the Hyundai Aura diesel AMT.