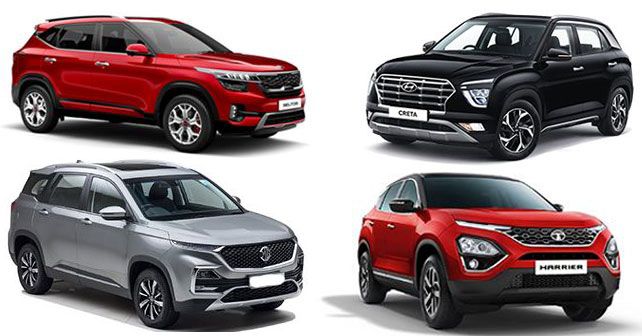 The mid-size SUV battle has now become more intense than ever, with the Kia Seltos and Hyundai Creta battling head to head alongside a new breed of larger SUVs, which are priced rather attractively.

Five years ago, Hyundai’s Creta took the Indian market by storm. It was a modern crossover SUV that was finally here to compete in the mid-size SUV segment that was dominated for ages by the Mahindra Scorpio, which until recently was the only proper SUV in the segment. Ever since its launch in 2015, there has been no looking back for the Creta, as its sales continued to soar, owing to its strengths as a refined and well-equipped product. Now, the regular product lifecycle for cars may very well be anywhere between seven to ten years today. But Hyundai wanted to keep its bestseller at the top of its game, so after just half a decade of its debut, the new Creta is here, and this time it has a different kind of rival. It's more of a sibling rivalry with the Kia Seltos with which it shares its new underpinnings.

In fact, this battle is a very close one, just a look at the price list below for both cars will show you just how intense the battle is. The Scorpio hasn’t made a comeback in its BS6 iteration. Meanwhile, the new Creta also has a set of different rivals – a breed of bigger mid-size SUVs that includes the Tata Harrier and MG Hector, both of which offer a more SUVish appeal with their butch road presence.

As you can tell from the prices, the Kia Seltos and Hyundai Creta are priced pretty competitively against each other, as they are more or less the same vehicle. Both of them have a give and take relationship with each other when it comes to equipment and features. But the core takeaway here has to be that the Seltos (its standard petrol variants) is just a little bit more affordable than the new Creta. But when it comes to diesel models, its the Creta that's the more affordable of the two. The petrol DCT models for both cars have near-identical prices.

As for the larger cars, MG has only updated its petrol models for BS6 compliance as of now and there is no diesel version on sale. Nonetheless, while prices are higher for the base variants of the MG, as you move higher up the variant chain, its prices become very competitive in comparison to the top-end versions of the Kia and Hyundai, making it quite alluring for mid-size SUV buyers.

On the diesel side of things, the Tata Harrier now with its more powerful 168bhp engine and the option of a six-speed automatic gearbox makes quite a statement. However, as you move up the variant list, the Harrier, which is only available with a diesel engine, does tend to get considerably more expensive than the Koreans, as is evident in the price chart above. And it isn't quite as well equipped as its smaller rivals either.

Still, if driver engagement and performance is your priority, the Tata makes a strong case for itself. On the other hand, if you want an urban SUV that's the talk of the town, you have to drive down the Korean lane.