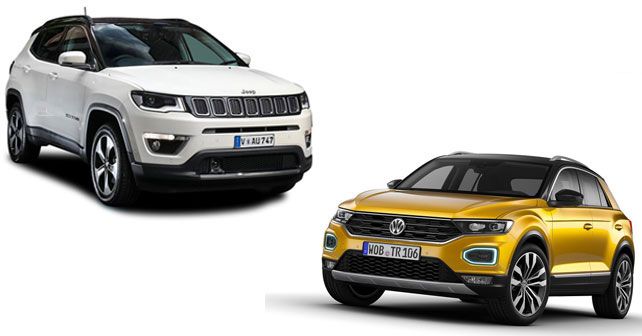 The Volkswagen T-Roc has been launched with the Jeep Compass petrol automatic in its crosshairs –  they both even have similar prices, with just a few thousand rupees difference. Here’s a look at how they fare against each other on paper.

The latest hot new SUV to have hit Indian soil has to be the new Volkswagen T-Roc, which has its target squarely set at another trending SUV in India, the Jeep Compass. It goes without saying that as a Volkswagen, the T-Roc will offer segment-leading quality levels and safety standards. We can say this for we saw the car at the 2020 Auto Expo in Greater Noida, and it did have typical class-leading VW build quality.

The T-Roc is built on VW’s MQB platform and has been launched as a CBU with a single variant in India. And since VW India has said that it will not have any diesel models on offer for now in India, the T-Roc we get here is powered by a 1.5-litre turbocharged petrol engine that is mated to a 7-speed double-clutch automatic gearbox.

The Jeep Compass petrol is powered by a similar engine, a 1.4-litre turbocharged petrol engine that is available with a choice of either a six-speed manual gearbox or a seven-speed double-clutch automatic gearbox, making it a little more flexibility to attract more buyers.

So without further ado, here’s a look at how both cars compare against each other on paper.

The Compass is the bigger car and, therefore, has more of an SUV appeal with its taller height and longer wheelbase, which frees up more space for rear-seat occupants. The T-Roc, on the other hand, with its svelte lines and low slung nature is instantly evident as a crossover, something that is emphasised by its compact dimensions.

The T-Roc may have a lesser powerful engine on paper, but given the powerful nature of TSI engines and the slick-shifting nature of VW’s DSG auto boxes, expect the T-Roc to be a quicker car than the Compass petrol automatic, which is known to have sluggish gear changes at times.

When it comes to features, both cars are fairly well equipped, with the T-Roc boasting a few extra features, such as a digital instrument cluster, keyless entry, and heated front seats. But the Compass makes up for what it misses out on with a few extra features unseen in the VW, such as electronically adjustable driver’s seat with memory and a large dual-panel panoramic sunroof.

In terms of price, the Jeep has an edge over the VW, as it is available in more variants and has the option of a manual gearbox, which gives it a considerably more affordable starting price than the T-Roc. The T-Roc with just a single variant on offer is priced at Rs 19.99 lakh, ex-showroom pan-India, while prices for the manual Compass petrol start at Rs 16.49 lakh and go up to Rs 19.69 lakh (ex-showroom Delhi) for the top-end Longitude Plus petrol automatic variant.