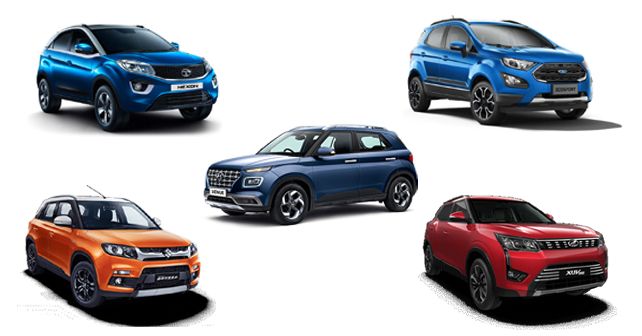 We put the new boy, the Hyundai Venue, up against its established rivals. Only this time, we take a look at what value each model offers for its asking price.

Well, with the recent launch of the Hyundai Venue in India, the number of compact SUV contenders has gone up to five. While you can compare the specifications of all the below-mentioned models here, we thought it best to bring you a price comparison of all the five models as well, keeping in mind the aggressive pricing of the Venue despite its feature-loaded variant line-up. Here's a look...

As is the norm, the price range of the petrol variant line-up gives us an idea of the starting price of each model. Leaving aside the Brezza (which is not available with a petrol engine), the Venue poses some serious competition to the Nexon as they both have a similar starting price. The XUV300 and EcoSport, on the other hand, start at a much higher price with the difference crossing ₹ 1 lakh. So, Hyundai loyalists are definitely at an advantage here. However, the Venue features the least powerful petrol motor (in the base E and S variants), with only an 82bhp power output. The EcoSport, in comparison, offers 121bhp from its 1.5-litre petrol motor. In terms of the price though, the Venue offers good value at the higher end of the spectrum as well, and the top-spec petrol MT version gets the 118bhp 1.0-litre turbocharged unit, taking care of the power deficit.

In the diesel line-up, Venue's pricing is at par with that of the Nexon and the Brezza. But, to be specific, the Nexon trumps them all with the lowest starting price. At the higher end, the top-spec variant of the Venue is almost a lakh more expensive than the corresponding version the Brezza. However, for that extra money, Hyundai is definitely offering quite a lot of segment-first features like Hill-Assist Control, cornering lamps, wireless charging, a cabin air purifier, HD infotainment screen, an Arkamys sound system and projector fog lamps. These features are offered over and above the usual stuff like an electric sunroof (missing in the Brezza), cruise control, rear parking assist, ABS with EBD, 6 airbags, push-button start-stop, etc. Plus, the Venue also offers the Hyundai Bluelink connectivity suite which, in its entirety, is a segment-first feature.

This is where things get more interesting. While the Mahindra XUV300 does not offer an automatic option as of now, the Nexon offers the cheapest automatic option out of the remaining four. Meanwhile, the Venue and the EcoSport might suffer a bit as there is no diesel automatic option on offer. This means the Brezza and the Tata Nexon are the only models here which offer a diesel automatic option. Coming to the type of automatic gearboxes on offer, the Nexon and Brezza both offer AMTs. The EcoSport, on the other hand, offers a torque converter setup. The Hyundai Venue is the only model here which offers a seven-speed Dual-Clutch Transmission (DCT), another segment-first feature. In terms of driving dynamics, performance and smoothness, AMTs fall at the lower end while the DCT by far offers the most advanced setup here, even in terms of tech.