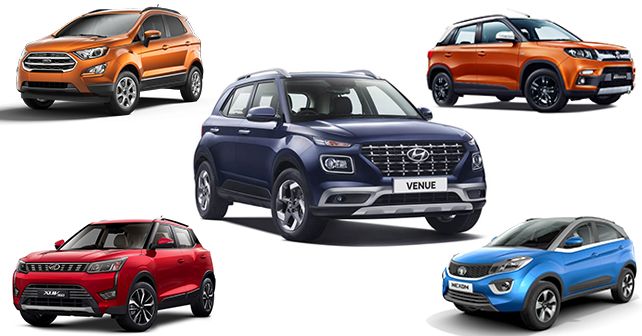 After Mahindra, Hyundai becomes the latest brand to join the compact SUV war with the Venue. We take a closer look at what all each car has to offer.

The all-new Hyundai Venue may have been late to join the sub-4m compact-SUV party, but it seems to have all the bases covered. And from what we can tell, it’ll definitely give its arch-rivals, such as the Maruti Suzuki Vitara Brezza, Ford EcoSport, Tata Nexon and the Mahindra XUV300 a run for their money. The Venue will go on sale in India on May 21, 2019, but barring its prices, most of the details about it are now out. And that means it’s time for us to do a quick spec-check to see how it stacks up against the competition.

All five SUVs here stick within the sub-4m dimensions, meaning there’s nothing to choose between them in terms of overall length. However, the XUV300 has the longest wheelbase and it’s the widest SUV of the lot here. Hyundai’s newcomer, with its wheelbase of 2,500mm, is closely matched to the Vitara Brezza, EcoSport and Nexon. The Hyundai, however, has the lowest height of all the vehicles here and it also not the widest car here. All of this is also apparent in the way it looks as it’s a compact and petite appearance.

The Hyundai Venue will be available with two petrol and one diesel engine options. While the 1.4-litre diesel unit will be paired to a six-speed manual gearbox, the 1.2-litre petrol motor will be the mainstay of the range. For customers looking for more performance or an automatic version, the 1.0-litre 3-cylinder turbo petrol variant will be the one to go for. In comparison, the only vehicle that comes to the Venue’s expansive range of powertrain options is the EcoSport. It also has three engines on offer – two petrol motors and one diesel. For enthusiasts, there’s the EcoBoost 1.0-litre turbo petrol motor and it’ll be a direct rival to the Venue’s new 1.0-litre turbo petrol engine. However, in the EcoSport, the turbo motor is only available with a manual gearbox. There’s a petrol automatic version, but it’s offered with the 1.5-litre naturally aspirated 3-cylinder Dragon engine and has a torque converter.

The XUV300 and Nexon are available in both petrol and diesel versions, while the Vitara Brezza is only offered with a diesel engine – a petrol version is reportedly in the works though. The XUV300 doesn’t have an automatic variant and comes only with a manual gearbox. The Vitara Brezza and Nexon, however, get optional AMT transmission, in addition to their manual gearboxes.

The Venue is dubbed as India’s first ‘smart connected’ car as it comes with a host of connectivity features, also called the Blue Link System. Apart from this, top-end version of the Venue is decently kitted-out in comparison to its rivals – which, let’s be honest, are also loaded to the gills with features. Among some of the common features in all cars are projector lamps, a touchscreen infotainment system, automatic climate control, Apple CarPlay, etc. However, the Venue does trump the lot with its numerous segment-first features like Wireless Charging, Air Purifier, Projector Foglamps, 7-speed DCT and more.