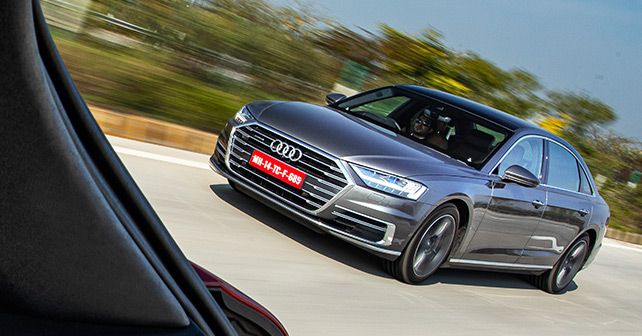 From four-wheel steering to four-wheel drive and from seat massagers to a foot massager, Audi’s flagship is here to push the limits of the luxury limousine.

What would you say if I asked you about the future? Perhaps you would find it intriguingly uncertain. Uncertainty, most often, is a companion on the unchartered course. But what if I were to tell you that you could have a peek into the future, an understanding of how life would be in the not-to-distant future. It would be exciting, wouldn’t it!

Now, since I’m not a babaji running a scam, I can’t tell you about your future life. However, what I can tell you is that there is a sure-fire way of looking into the future of the automobile. To get an idea of just what to expect from your average car in the course of the next decade or so, the answer always lies with the best cars in the world – I am, of course, talking about flagship luxury limousines.

A glimpse into the unknown
A flagship luxury limousine is often a harbinger of technological advancement for a luxury carmaker – as it not only pushes the limits of innovation, science, and technology but also offers a glimpse into the future.

So, while the Audi A8 L is a couple of years late to the party in India, it has everything it takes, and more, to challenge the current versions of its arch-rivals, the BMW 7 Series and the revered Mercedes-Benz S-Class. 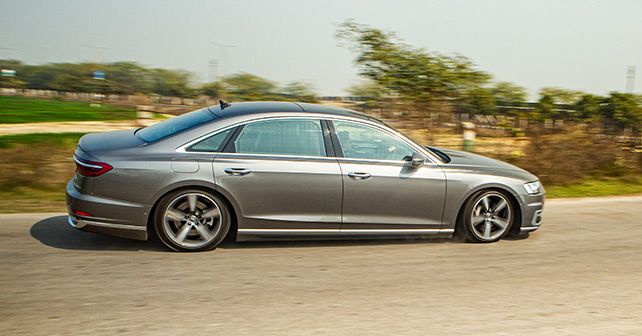 This flagship luxury limousine battle has been going on for quite a long time now, and at the forefront of it has been the German triumvirate of Audi, BMW, and Mercedes-Benz. Each of them try to outdo one another every couple of years by bringing in evolved versions of their flagship models that push the boundaries of technology and innovation.

It goes without saying that Audi’s fourth-generation A8 L, originally revealed a couple of years ago, was a step in this direction. Now, even though it’s a little late coming to our shores, be rest assured that it still has enough tricks up its sleeve to show you just what you can expect from cars of the future.

Right from its wraparound taillights, which make it look like a concept car at night, to its predictive active air suspension, which works within milliseconds to alter the ride individually for each wheel, and its Wi-Fi enabled rear-seat screens, the Audi A8 L very boldly illuminates the uncertain future.

The cabin welcomes you with a wide variety of design elements and trims. Traditionally, in such a car, you expect everything to be draped in leather or adorned with wood. However, Audi has tried a different approach, with Alcantara inserts in the leather, gloss plastic surfaces, faux metal trim elements, and LED lighting inserts. In fact, there is just so much going on here that the materials change every few millimetres. But it just seems to work perfectly.

As expected, the A8 L comes with electronically adjustable… well, everything – from the air-vent covers and the seats to the sun blinds, everything can be adjusted with the press of a button. 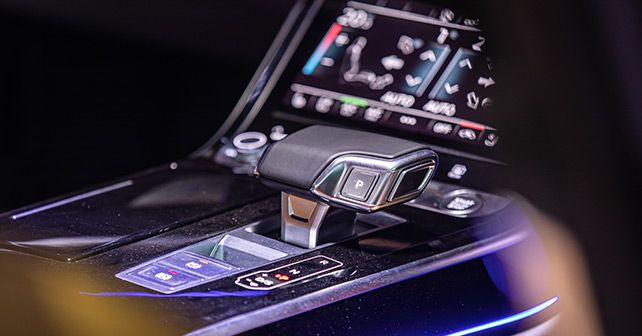 Revel in opulence
Since it’s a luxury limousine, the most appropriate seat to be in is the rear passenger seat, which, at the touch of a button, reclines and pushes the front passenger seat forward to reveal a footrest – giving you the perfect first-class experience.

Now, all that’s left to do is activate the seat massager of course, but also the foot massager on the footrest – yes, you read that right, it also has a foot massager! The central touch-screen remote in the back also allows you to access the individual climate control operations for the rear seats, as well as the ventilated and heated rear seats, and, of course, instruct the hidden masseuse to do its thing. Oh, and if you want a chilled beverage, you also get a mini-fridge between the rear seats.

And if that’s not enough, you can stream your favourite movies and TV shows on the Wi-Fi enabled rear-entertainment screens, as they are android powered tablets! Given its ₹1.56 crore price, you’re more likely to be a corporate guru who needs to send e-mails, work on Excel sheets, and even host conference calls – all of which can be done using the tablets in the back of the A8. 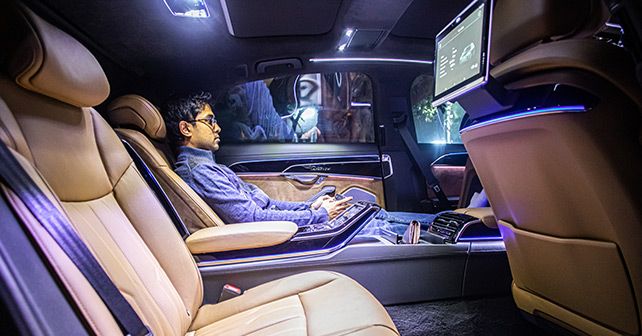 Four-wheel wonder
When you think about four-wheel drive, usually you think of big, burly SUVs. But Audi’s legendary Quattro permanent four-wheel-drive system is not your typical low-range 4WD system – it’s a brilliant system with torque vectoring technology that offers tenacious grip over loose surfaces. So, while your A8 L limousine isn’t designed for off-roading, it sure can take on slippery surfaces, such as wet or snow-covered roads.

When it comes to comfort, the A8 L’s air springs are very good at cushioning any and all undulations, unless you attack a particularly patchy section of tarmac at high speeds, which seems to be the only chink in its armour. But, for the most part, the ride is pretty sublime. In terms of handling, it remains planted and absolutely confident at the limit, despite the car’s tendency to lean into sharp bends.

And it’s here that the other four-wheel system becomes a factor – I’m talking about the four-wheel steering. This electronic steering system turns the rear axle in the same direction as the front axle at higher speeds for better cornering stability. While, at low speeds, the rear wheels turn in the opposite direction of the front wheels to give this rather long sedan the turning radius of a much smaller car. It truly is very impressive and makes driving the A8 an absolute breeze. 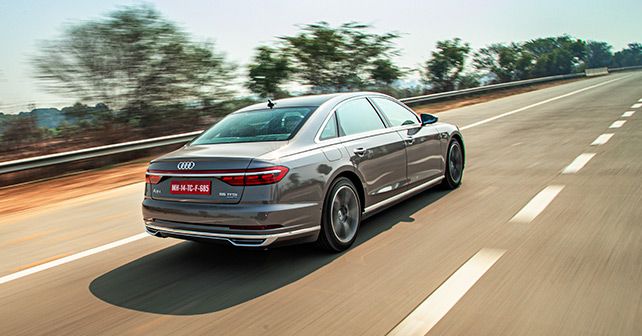 Light & breezy
Speaking of breezy, this 55 TFSI A8 L for India comes with a 335bhp V6 petrol engine, which, as expected, is silky smooth. The car’s 8-speed automatic gearbox complements the engine perfectly, and, along with the light steering and relatively tight turning radius, makes the A8 L blissful to drive in the city.

The only hitch here is the slow kickdown response from the transmission under aggressive throttle inputs. However, this can be taken care of by putting the engine in Dynamic mode and the transmission in Sport mode. Although, this driving mode is best reserved for expressways where the A8 L becomes an epic cruise mobile.

Flagbearer by design
The A8 L is a true technological masterpiece, with its brilliant four-wheel-steering system, adaptive air suspension, and more. In its signature move as a flagship model, it pushes the limits in everything it offers – be it the foot massaging feature, the rear-seat entertainment package, or the sheer number of functions the tablet allows you to control.

So, it’s safe to say that you’ll get to see a lot of cool tech that you’ve never seen before – some of which you will likely see in more affordable cars in future. In that sense, it’s a true glimpse into the future, isn’t it? 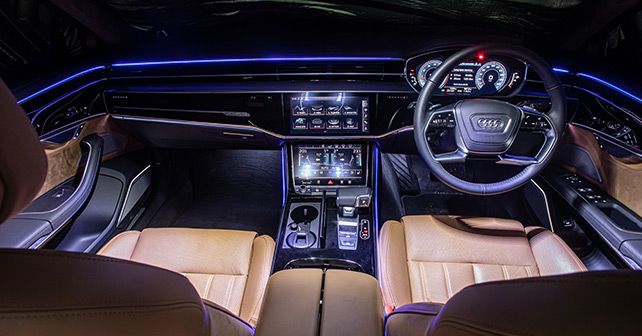 The cabin of the A8 is ultra luxurious, with its leather, alcantara, faux metal & LED lighting inserts.

X-factor: A luxury limousine that pushes the limits of automotive technology. 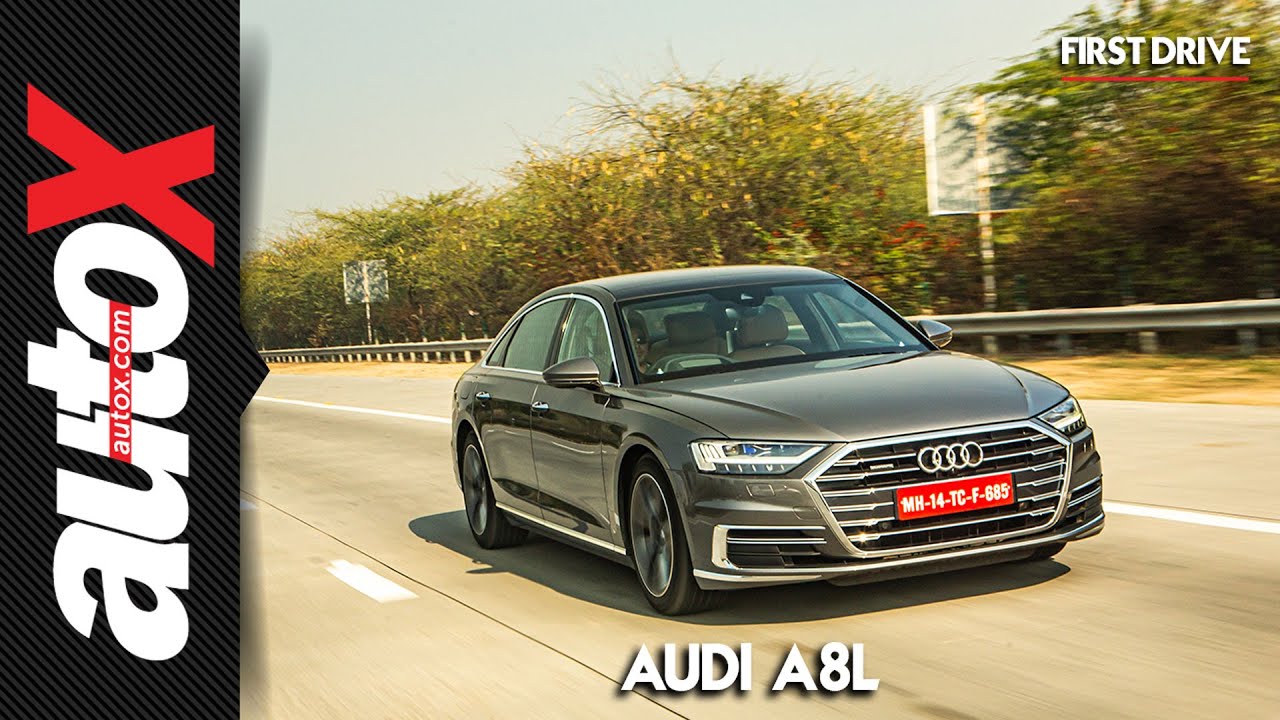