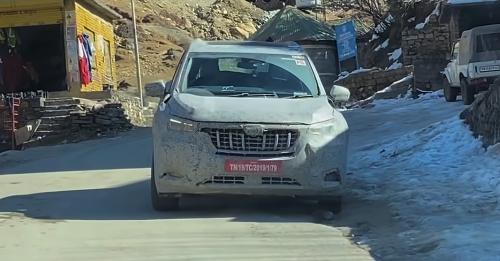 Mahindra is developing a new 2021 model for the XUV500, meaning that this will be the second-generation version of the SUV. For years, the Mahindra XUV500 was the flagship model for Mahindra with class-leading equipment and features that always stood as a strong highlight. And now, Mahindra is looking to build on the credentials with the second-generation model with even more technology and features, which rumour has will also include level 1 autonomous driving tech.

Spy shots of the XUV500 reveal that it retains a similar profile as the current model, which indicates that it will continue to carry over its monocoque chassis, unlike some Mahindras. Expect minor alterations to the existing chassis of the SUV. The new model will get flush door handles unlike that of the previous model.

While its new feature and equipment list aren’t out yet, what we do know is that the D-segment crossover SUV will come equipped with an all-new digital instrument cluster and an infotainment system that will be housed in a single panel sitting above the dashboard, much like in new age Mercedes-Benz and Hyundai-Kia cars.

The new Mahindra XUV500 will continue to be a seven-seater model in its new avatar.

Under the hood, the new XUV500 will feature Mahindra’s new 2.0-litre petrol engine that has made its debut in the new Thar, albeit in a more powerful state of tune. The Mahindra XUV500 petrol will be offered with the choice of manual and automatic gearboxes. The new diesel Mahindra XUV500, meanwhile, will continue to be powered by Mahindra’s tried and tested 2.2-litre, four-cylinder turbo diesel engine that continues to power some of its other cars such as the Scorpio and Thar. This engine too will make more power in the XUV500.