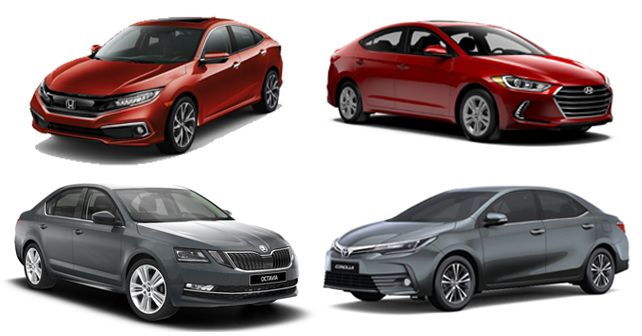 The 10th-gen Honda Civic is all set to become the latest entrant in the executive sedan segment. Armed with radical styling, way more features and an all-important diesel engine, the new Civic could be a potential winner for Honda.

With the 10th-gen Honda Civic set to make its comeback in India, the executive sedan segment will receive a much-needed refresher. There's no doubt that its competitors, chiefly the Elantra, Altis and the Octavia, are all worthy ones, however, there's also no denying that the segment has become a bit staid over the years. As the technical specs and features of the 2019 Civic are out already, here's a look at how it stacks up against its rivals on paper.

All four cars here share pretty similar body dimensions, varying by just a few millimetres here and there. While the length and breadth figures give us a fair idea of each vehicle's road presence, it's the Civic's height (lowest of the four at 1,433mm) which might cause a bit of an issue. You see, what the 2019 Civic gains in visual appeal due to its coupe roofline, it might just lose that advantage in terms of passenger headroom, especially in the rear. In this respect, the Octavia seems to be the one with the roomiest interior. While the wheelbase remains identical for three of the competitors, Honda has not revealed the Civic's official ground clearance figure (which has been its Achilles heel in the past), hinting at the fact that it still might be lowest among the four.

This is where things really get interesting. With the 2019 Civic, Honda will eliminate yet another disadvantage of its predecessor, which was the missing diesel engine option. However, at a time when most buyers are shying away from diesel vehicles, we are yet to see if Honda's rather late diesel offering will be of any advantage or not. Coming to the engines, the Civic does seem to be a fair bit low on the power and torque front. Of course, the Altis is in the same boat, but the Elantra and the Octavia are simply unmatched in this respect. However, Honda does have an ace up its sleeve – the claimed fuel efficiency figure of the Civic diesel. At 26.8 km/l, Honda has a big customer-centric advantage straight off the bat. While Indian car buyers are definitely becoming more exuberant with each passing day, the rather large number of folks who still want a frugal vehicle just can't be ignored!

This is where the Civic will face some genuine pressure from its rivals. With the Octavia leading the pack in terms of the large array of driver aids and premium features on offer, Honda has given the Civic some unique features, like a lane-watch camera (segment-first), motion-adaptive power steering wheel, Traction Control (Vehicle Stability Assist) and a remote engine starter, to fend off the pressure. Basics like a touchscreen infotainment system, push-button stop/start and a decent number of airbags seem to have become the norm now.

After all the debate and discussion, it all ultimately comes down to how the Civic will be priced. Honda might opt for the modern-day approach of launching a new product with lower, introductory prices, just for the sake of gaining initial momentum, or it might go all out and keep the prices competitive right from the start, pinning its hopes on the popularity and the emotional connect of the Civic nameplate. Whatever may be the case, Honda will always have its reliability and fan following to fall back on.