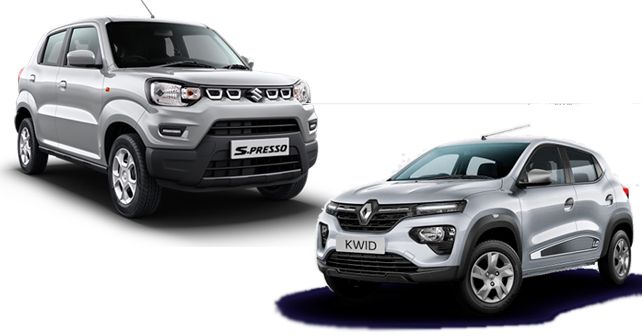 The 2019 Renault Kwid arguably looks cooler & more modern than its predecessor. Plus, it gets more equipment too. However, has Renault done enough to fend off the fresh attack from Maruti Suzuki's latest 'Mini-SUV', the S-Presso?

The battle in the entry-level A2 hatchback segment is raging once again as Renault has recently launched the much-awaited facelift of its successful hatchback, the Kwid. Meanwhile, Maruti Suzuki too has taken the opportunity to launch its all-new entry-level contender, the S-Presso 'Mini-SUV'. So, can the Kwid, with its new-age appeal, take on the new kid on the block? Or has Maruti Suzuki struck a chord with hatchback buyers in India once again? Here's an on-paper comparison to figure it out.

In terms of length & width, the Renault Kwid trumps the S-Presso & therefore leads to the conclusion that the former is likely to offer a roomier interior. This conclusion is further backed up the wheelbase figures, the Kwid having 42mm more of it. But the S-Presso does have an ace up its sleeve, and that's its height. The S-Presso is 75mm taller than the Kwid, thanks to its SUVesque stance. This also means that the S-Presso will be a more comfortable option for taller passengers, offering adequate headroom. In terms of urban usability, both cars are more or less matched with near-identical ground clearance. However, on paper, the Kwid offers 4mm more of it.

Another point of comparison where the two hatchbacks are neck & neck. Both cars get a single-engine option - a 1.0-litre three-cylinder petrol motor. However, there's a significant difference. As Renault is yet to present BS-VI compliant engines, the updated Kwid continues to be powered by a BS-IV motor. Meanwhile, Maruti Suzuki has been quick to respond to this conversion and it has already launched the Alto with a BS-VI compliant motor. As the S-Presso shares the same engine, it is available as a BS-VI compliant car from the day of its launch. Despite this though, both cars offer identical power figures. The Kwid's AMT derivatives deliver a slightly better fuel-efficiency figure of 22.5km/l.

This is where things get a bit interesting. Before we get to the features comparison, it's worth mentioning that the Kwid's variant line-up starts from the 800cc variants. So, the Kwid 1.0-litre variants technically start from a higher price point. On the other hand, the S-Presso is only available with a 1.0-litre motor. With this knowledge in mind, the Kwid 1.0-litre definitely gets a few additional goodies over the S-Presso, like a rear parking camera, rear power windows, a bigger infotainment touchscreen & LED DRLs. The S-Presso, meanwhile, offers slightly better ergonomics, thanks to features like steering-mounted audio controls.

Considering the fact that both these cars are powered by 1.0-litre motors, the S-Presso is arguably a better, more lucrative option for budget-centric buyers or first-time car buyers who'd be interested in lower-spec variants. With a significantly lower starting price, the S-Presso is also a step ahead thanks to its BS-VI compliant motor. But those willing to shell out on top-spec variants are in for better value-for-money with the Kwid, as they'll be entitled to more features & equipment at virtually the same price as the S-Presso.