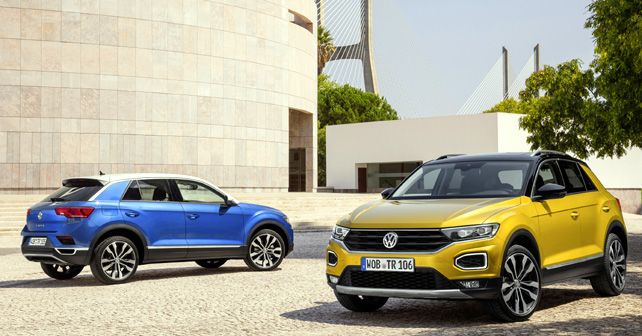 The Volkswagen T-Roc will arrive on our shores as a petrol-only CBU model to take on the Jeep Compass & the updated Hyundai Tucson.

At the recently held Skoda Auto Volkswagen India Media Night, we received confirmation from the folks at VW that they'll be launching their T-Roc midsize SUV in India in April 2020. The T-Roc will be VW's second product launch for 2020, preceded by the launch of the Tiguan Allspace (7-seater version of the Tiguan) in March.

For those now aware, the T-Roc is based on VW's MQB platform and was revealed as a Concept at the 2014 Geneva Motor Show. The final production-spec T-Roc made its global debut in 2017. In VW's SUV hierarchy, the T-Roc sits just below the Tiguan/Tiguan Allspace, making it a rival to the Jeep Compass & Hyundai Tucson. Below the T-Roc, you'll find the new, India-bound VW Taigun subcompact crossover (Kia Seltos & Hyundai Creta challenger) and below the Taigun is VW's smallest compact SUV on offer, the T-Cross (not coming to India any time soon). It's worth mentioning that the T-Cross and Taigun are near-identical models, the difference being that the Taigun, at 4.2m in length, is based on the stretched version of the T-Cross sold in China. The standard T-Cross is about 4.1m in length.

Despite being a shrunken-down version of the Tiguan, the T-Roc offers a fresh design. However, there are a few things that might not play in its favour. First, VW India is planning to bring the T-Roc here as a CBU, with no clear plans of starting assembly ops here anytime soon. Second, in line with VW's plan to discontinue diesel engines from all its entry and mid-range models, the T-Roc will go on sale only with a 1.5-litre petrol motor, mated to a 7-speed DSG transmission unit.

As mentioned above, the T-Roc will be in competition with the Jeep Compass & the Hyundai Tucson. Therefore, expect the T-Roc's price to be around the ₹20 lakh mark (ex-showroom).