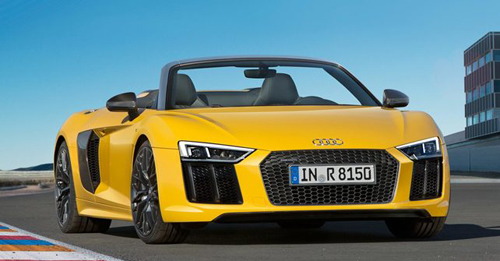 Subsequent to the introduction of the new R8 last year, Audi will soon bring its drop-top version to our shores. Audi developed the new R8 Spyder with the intension of making it lighter, stiffer and faster. And although it won’t go on sale in the ‘Plus’ trim, the power of 540 horses that it packs is enough to take the speedo needle north of 100km/h from standstill in just 3.6 seconds. The beauty of the R8 Spyder though is its weight. The Spyder’s aluminium space frame weighs 208kg, which is just 8kg heavier than the Coupe version while overall the R8 Spyder weighs 1,720kg - 80kg heavier than the standard car.

While the Spyder, is just a wee bit slower than the coupe, it retains all the characteristics of its R8 that it has been known for all these years. With manageable performance and the potential to be an everyday supercar, the R8 does thrill, but in absolute style. Sharper lines all around, large honeycomb hexagonal grille, sleek headlamps and not to mention the carbon fibre bits, make the Audi R8 Spyder a sexy machine to look at. The R8 Spyder will make it to Indian shores soon. Considering that it isn’t the Plus version, it is expected to be priced around the same as the coupe version.