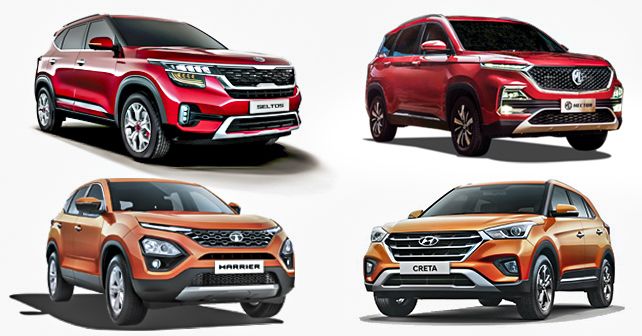 Here's how the all-new Kia Seltos stacks up against its established rivals - which includes the Hyundai Creta, MG Hector and Tata Harrier - on paper.

Even before its market launch, the all-new Kia Seltos has become a sensation in India. And that’s understood. You see, given the package that’s on offer in the Seltos, it has the makings of an outright winner for Kia Motors. But, having said that, upon its launch here, the Seltos will take the fight to some established names such as the recently launched MG Hector, Tata Harrier and its very own cousin and also the current segment leader, the Hyundai Creta. So, does the Seltos have what it takes? Let’s find out in this quick spec-comparo,

Since Kia and Hyundai are sister brands, the Seltos is based on the same platform as the second-gen Creta – which is yet to arrive on our shores. So, given the fact that it’s basically running on the new platform, it’s of course substantially longer and wider than the Creta. However, the Creta is taller. Both the Korean siblings have identical ground clearance of 190mm though. The Seltos, however, has a bigger boot. 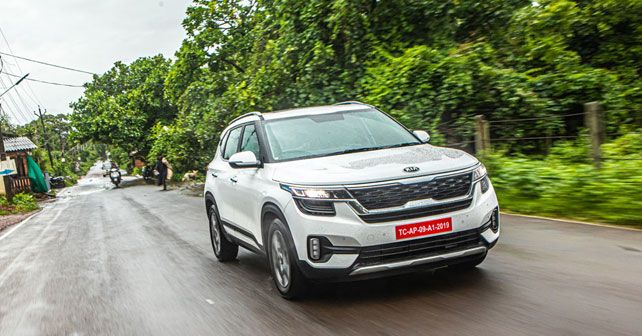 If you want bragging rights of owning an SUV, the Harrier is still the one that has got the right girth and dimensions. Sure, the MG Hector is equally matched, but it looks under-tyred with its 17-inch wheels. The MG, however, scores high in terms of practicality as it’s most spacious cabin. Plus, in terms of dimensions, the Hector wins in pretty much all the directions.

The Kia Seltos will launch with three powertrain options – 1.5-litre diesel, 1.5 litre petrol and 1.4-litre turbo petrol. All come paired with a six-speed manual gearbox as standard. Automatic versions get a 6-speed torque converter for the diesel mill and a CVT for the 1.5-litre petrol, while the 1.4 turbo gets a 7-speed dual-clutch transmission. All the three engines are BS6 compliant, which is not the case with its rivals at the moment.

The Kia’s diesel motor is the least powerful though, and even the diesel Creta produces more power and torque. The MG and the Tata, on the other hand, get the identical 2.0-litre Fiat-derived diesel engines, but the Harrier runs the more powerful tune. Both produce identical torque at 350Nm – which is 100Nm more than the Seltos. The Harrier and Hector, however, don’t have automatic transmission available in diesel versions. 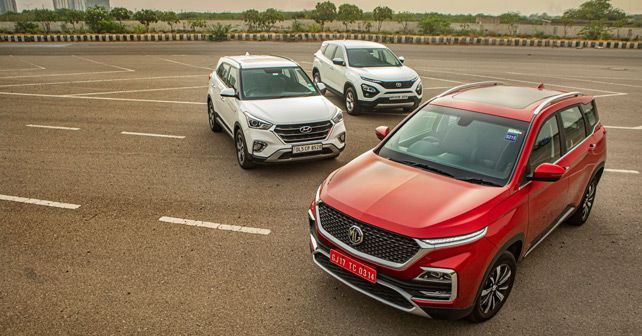 The Harrier doesn’t have a petrol motor either, meaning it’s a three-horse battle in this department. And, on paper, it’s a battle where the Seltos seems to have an upper hand. The Seltos has two engine options on offer, both of which come in manual and automatic. The 1.4-litre petrol coupled to the DCT is a driver’s delight as we found out during the first drive of the Seltos, so beating it in terms of performance and driver involvement will be difficult for the Hector or the Creta. The Hector, however, flashes the green card as it's also available with a hybrid powertrain.

All four vehicles are loaded to the brim, and you get more features than you’ll ever need! That said, the Kia Seltos and MG Hector being the new entrants lead the pack as they are only ones to get connected car features here. Despite being the oldest product here, the Creta has a decent feature list. In isolation, the Harrier is also packed with some great features, but in this company, it loses out in a lot of areas.

The Kia Seltos is expected to be priced between Rs 11 lakh and Rs 17 lakh (ex-showroom). This means it'll be more expensive than the Creta (Rs 10 lakh - Rs 15.67 lakh), but that's justified. The MG Hector is a worthy rival and is priced from Rs 12.18 lakh to Rs 16.88 lakh, but the catch here is that you can't buy it right now since it's already sold out for 2019! The Tata Harrier is priced between Rs 13 lakh and Rs 16.76 lakh, but then it doesn't have an automatic or petrol version on offer.

All told, if Kia manages to play the price card right, we believe the Seltos has the potential to become the segment leader. Not to mention, the fact that the Seltos has already received over 23,000 bookings ahead of its market launch is a further proof that this brand new Kia SUV is already on a roll!