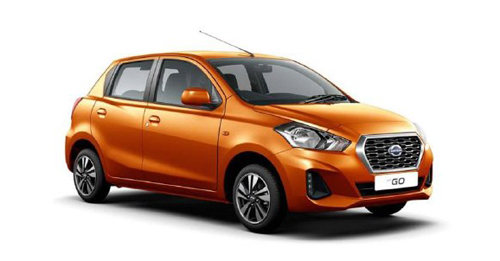 The Go hatchback from Datsun was aimed at bringing back the brand from non-existence. It was made keeping in mind the entry-level budget hatchback segment but didn't take off as planned. However, that hasn't had Datsun pull the plug on its little baby; instead, they've been fine-tuning it over the years. For an insubstantial hike in Datsun Go price, the 2018 model gets a revamped exterior, more features and a reworked cabin.

The changes on the outside are pretty prominent. The large, hexagonal grille gets mesh, but the re-shaped bumper is most apparent. It looks sharper and edgier, giving the Datsun Go new model a sporty look from up-front. You'll notice the LED DRLs on the 2018 model as well. The wheels are larger too at 14-inches, and go a long way in giving the Go a better stance. Also, the diamond-cut alloy wheels look cool, while the ORVMS are body-coloured. The roof rails give it a bit of a crossover look. At the rear, the bumper has been redesigned, while there is also a strip of chrome on the lower portion of the tailgate and the addition of a rear wiper is welcome. It looks particularly attractive in the Amber Orange shade.

The 2018 Datsun Go variants are as follows: Go D, Go A, Go A Option, Go T and Go T Option. Features include follow-me-home headlamps, rear parking sensors, 7-inch infotainment touchscreen system with Android Auto and Apple CarPlay, Bluetooth and USB. On the safety front, it gets ABS with EBD and brake assist and dual front airbags.

Inside the cabin, you're greeted by a redesigned dashboard, a lot of other details and revamped front seats too. The instrument cluster gets an analogue tachometer as well. The most important addition, however, is the 7.0-inch touchscreen infotainment system that gets Android Auto and Apple CarPlay. The system is fairly smooth and easy to operate. Gone are the joined seats for the front passenger; the 2018 Go gets individual seats that are quite comfortable and provide decent support. There's also a proper handbrake placed in between the front seats. Space at the rear is alright, but the bolstering could have been better. The 265-litre boot is quite large and can swallow in a whole bunch of shopping bags.

The 2018 Go is powered by the same 1.2-litre, three-cylinder petrol engine that makes 68hp and 104Nm of torque. Paired to the engine is a 5-speed transmission. There is ample performance for urban use, but it's only when you hit 2000rpm, do you feel the sprightliness of the motor. On the highway, however, it is best driven at a relaxed pace. Brake hard, and the Go begins to feel like it could have had better bite. Ride quality, on the other hand, is bit on the firm side. Massive speed breakers are never an issue, thanks to the 180mm of ground clearance. Refinement levels have improved to an extent as well. Datsun is all set to introduce CVT automatic gearbox, which is set to further push the Datsun Go on-road price by a small extent.

The Datsun Go's ARAI-certified fuel efficiency figure is rated at 19.83kmpl for the petrol model. 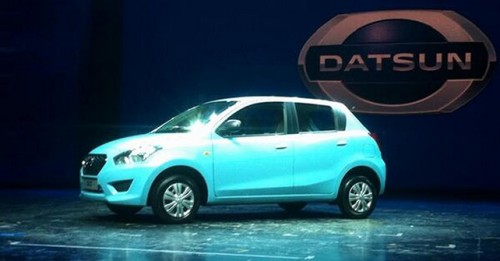 Datsun today unveiled its first car in Delhi today. The Datsun brand has returned to the world stage after 32 years and today it showcased its....

What is the current on-road price of Datsun Go?

Currently, the Datsun Go is priced at Rs. 4.03 Lakh for the base D trim.

What is the price of the top variant of Datsun Go?

Which year did Datsun introduce the Go in India?

The Datsun Go, in its current form, was introduced in 2018 .

What are the top competitors of Datsun Go?

The Datsun Go goes up against the Renault Kwid and Datsun redi-GO in the Indian market.

Datsun Go Price in Nearby Cities