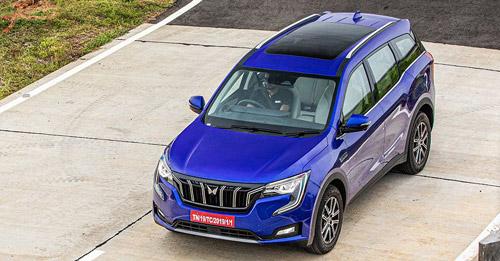 While Mahindra’s nomenclature scheme might point out to the XUV700 being a comparatively higher-end model than the XUV500, but it is essentially the successor to the said. And since Mahindra is keen on keeping the older XUV500 in the family as well – as per recent reports – the XUV700 will fit in a notch above and serve as a more premium model.

The Mahindra XUV700 is anything but old. It might have taken Mahindra extremely long to update the once-popular XUV500, but it seems to have done a very impressive job. It is, without a doubt, a Mahindra SUV from its design language. It’s big, imposing, and is sure to please the audience with its somewhat subdued design. It is also the first Mahindra SUV to wear the new badge up its nose. One sore point is the tailgate, which despite being made up of plastic instead of metal to carry out all the sharp creases and cuts, doesn’t look all that great. But, overall, in real life, the XUV700 is one big machine, and that’s what the Indian customers are going to look at about it.

Kudos to Mahindra to fit even the lower-spec variants of the petrol XUV700 with the same engines as the higher-end trims. Therefore, you get a 2.0-litre petrol unit and a 2.2-litre diesel engine. These units are the same as in the Thar but have been revised to deliver more punch. The turbo-petrol unit makes 197bhp and 380Nm while the diesel is available in two states of tune - 182bhp and 420Nm in the AX MT variants and a lower 153bhp and 360Nm in the base MX MT trim.

What makes the Mahindra XUV700 all the more exciting is its price tag. While Mahindra has yet to fully launch the XUV700, it has revealed prices for some of its variants. The prices start at just Rs. 11.99 lakh for the MX petrol trim. The diesel MX variant, on the other hand, costs Rs. 12.49 lakh (Both prices Ex-Showroom). It comes with great engines, a price to beat, and brimming with features. And this makes us think that the Mahindra XUV700 may be the one to start a war in this segment!

The wait is finally over! Mahindra’s most awaited product for the year 2021, the XUV700, will make its first appearance this week. The launch of the seven-seater SUV is expected in the coming....

This new logo will only be used on the Mahindra SUV portfolio –the brand’s commercial vehicle division will continue with the current ‘Road Ahead’ insignia. Mahindra will also revamp its....

Expected with first in segment features, the launch of the Mahindra XUV700 is right around the corner. So far, Mahindra has revealed three of its features and we expect a few more before seeing the....