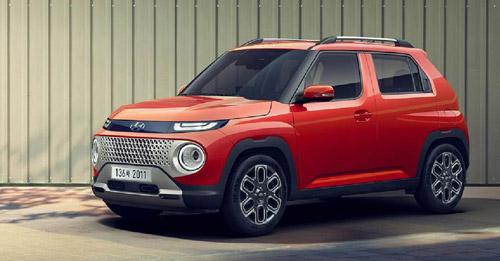 Maruti Suzuki raised quite a few eyebrows when it introduced the S-Presso in India. While some questioned its design, others didn’t quite understand the segment it created; ‘Micro-SUV’. Now, with a couple more additions like the Tata Punch, lined up for the segment, let’s see what the fuss is all about. The Hyundai Casper is set to be the latest entrant in this segment. The micro-SUV has been globally unveiled where it will launch first. The Casper new model is likely to enter the Indian market by the first half of 2022.

While Hyundai is yet to reveal the exact dimensions, it is expected that the Casper will resemble the Maruti Ignis in terms of dimensions. Expect a quirky-boxy silhouette with split-LED headlamps, LED DRLs and triangular motifs on the silver grille. It will also feature a flat bonnet, a faux silver skid plate and silver roof-rails. The Hyundai Casper feature list is expected to have a sizeable touch-operated infotainment system with Apple Carplay and Android Auto and the brand’s connected tech.

In order to keep up with the competitive pricing of the segment and the purshaching power of the people looking at this segment, the Hyundai Casper price is expected to be between Rs. 4-7 lakh, ex-showroom, New-Delhi.

The segment that sees the Maruti Suzuki Ignis, and the upcoming Tata Punch is likely to be populated with yet another micro-SUV. Hyundai will soon join the band wagon with its upcoming....