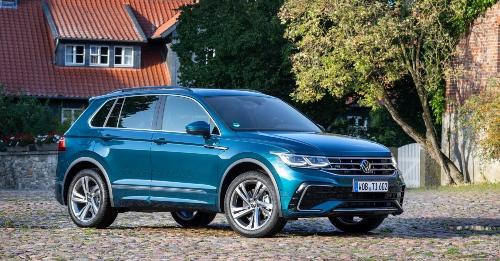 Discontinued in 2020, the Volkswagen Tiguan is all set to make a comeback very soon. However, rather than re-introducing the older model, Volkswagen is taking this opportunity to bring the Tiguan facelift to our shores, which was revealed globally in 2020.

The Tiguan facelift gets no sheet metal changes, but the changes come in form of a new front bumper with an all-new grille that merges seamlessly with revised headlamps. In profile, the SUV now gets a set of new alloy wheels, while at the rear, the changes are limited to revised taillamps along with a new bumper.

On the inside, the Tiguan now gets a new flat-bottom steering wheel along with a full-digital instrument cluster. It also gets a larger touchscreen taking the centre stage, which now comes with wireless Apple CarPlay support along with Volkswagen’s We Connect system.

Powertrain options for the Tiguan will include a sole 2.0-litre TSI petrol engine, which already does its duty in the bigger Tiguan Allspace. It is good for 188bhp and 320Nm of torque, and it comes mated to a 7-speed DSG gearbox as standard.

Expect the facelift version of the Tiguan to hit the Indian shores in the coming months. We expect it to be priced in the same range as the older model. It will lock horns with the new Citroen C5 Aircross, Jeep Compass, and Hyundai Tucson.

Volkswagen & the VW Group's bestselling SUV across the globe is back for 2020 with a minor facelift. Thanks to a look inspired by VW's latest design philosophy (that made its debut on the new Golf),....